Infiniti’s QX50 Concept also previews the brand’s roll out of its autonomous drive support technologies. Central to the strategy for the development of all future autonomous drive support systems is that they should ensure the driver retains ultimate control over the vehicle—in keeping with Infiniti’s focus on driver engagement—while providing a proactive approach to safety. 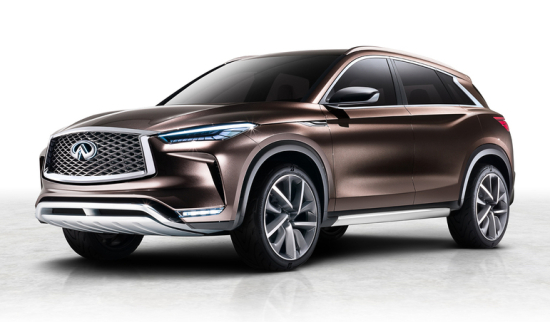 Infiniti’s autonomous drive technologies will act as a “co-pilot” for the driver, and “delegate” more onerous driving tasks to the car—such as navigating stop-start traffic on the highway or keeping track of the positions of surrounding vehicles.

Since its inception in 1989, Infiniti has brought a number of pioneering driver-assistive technologies to the customer. The company has been responsible for a series of world-first semi-autonomous technologies, including Predictive Forward Collision Warning, drive-by-wire Direct Adaptive Steering and Active Lane Control.

The QX50 Concept's autonomous drive support systems preview the first production-ready incarnation of a technology package that will be developed further in future production models.

VC-Turbo. Infiniti will exhibit its ground breaking new VC-Turbo (Variable Compression Turbo) engine technology in Detroit. The VC-Turbo engine is the world's first production-ready variable compression ratio engine. VC-Turbo technology combines the power of a high-performance 2.0-liter turbo gasoline engine with the torque and efficiency of an advanced diesel powertrain. Such an advanced powertrain would be well suited to the packaging of the QX50 Concept, the company said.

The production-ready 2.0-liter VC-Turbo engine represents a compelling alternative to diesel powertrains. Using an innovative multi-link system, the VC-Turbo engine is able to adapt its compression ratio according to driving conditions to deliver optimal levels of performance and efficiency. By seamlessly raising or lowering the reach of the pistons, it instantly selects the most suitable compression for current driving conditions. The engine is able to offer any compression ratio between 8:1 (for high performance) and 14:1 (for high efficiency).

With a development target power output of approximately 200 kW (268 hp) and 390 N·m (288 lb-ft) torque, the VC-Turbo engine will be comparable to certain six-cylinder gasoline powertrains for performance, while significantly outperforming them in efficiency. Infiniti engineers are targeting a 27% improvement in fuel efficiency over V6 gasoline engines of similar power output.

What compression mode is enabled during stationary Emissions tests. I'll bet it is 8:1. During 14:1 highway cruise it will spew aa much as a diesel without SCR/Urea. It will require Urea injection to meet NOx regs.

Put a Diesel and 48V Regeneration in it and it will perform great and get awesome fuel mileage.

I'm pretty sure they can go high CR during the low hp needs of cruising as the combustion temps are down. Only during max hp does the chamber have extreme pressure and temperature. Also, they are experimenting with lean burn that has always been attractive solution. I wonder if this engine can vary piston stroke during the cycle? I doubt it, but that would be great addition for future efficiency gain. It's a very clever way to make the engine variable stroke. Also, ethanol high octane fuel will decrease NOx naturally. Also, high octane ethanol mix would produce more power for more downsizing/downspeeding efficiency gain non the least a decrease in carbon emission. Yes, the 48v turbo charger will boost efficiency. I've read there is an efficiency gain on the turbo with ethanol fuel. Not sure why except maybe the extra fuel? When we rate an ICE with regenerative turbo, understand it's a trigeneration of fuel. Heat, power, and torque produced. This technology has the potential to surpass grid carbon efficiency for NG turbine even thought NG has good environmental rating it isn't above ethanol, especially cellulosic.

Trees. I believe the 48v system can support stationary to cruise launch support in urban stop start situations and electric turbo compounding when needed. Then of course the other electric parasitic support systems such as AC.