US driving topped 2.4 trillion miles in the first nine months of 2016, an increase of 3.0% compared to the same period last year, lengthening a series of consecutive monthly increases that started in April 2014, according to preliminary new data released by the US Department of Transportation’s (USDOT) Federal Highway Administration (FHWA).

The new data, published in FHWA’s latest “Traffic Volume Trends” report—a monthly estimate of US road travel—show that more than 265.5 billion miles were driven in September 2016 alone—a 2.4% increase over the previous September and a 0.4% increase compared with August 2016. 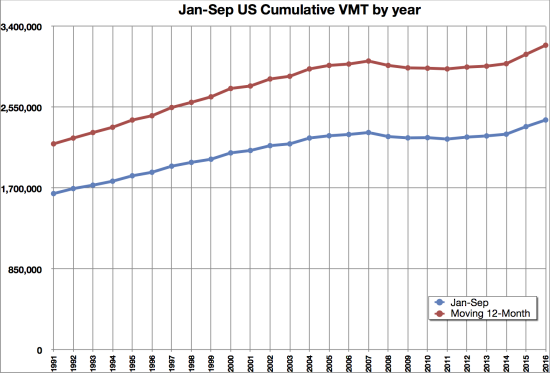 The September 2016 report also includes seasonally-adjusted data, which is conducted by USDOT’s Bureau of Transportation Statistics as a way to even out seasonal variation in travel and enable vehicle miles travelled (VMT) comparisons with any other month in any year. The seasonally-adjusted vehicle miles traveled for September 2016 were 268.7 billion miles. The estimates include passenger vehicle, bus and truck travel.

In September, US drivers increased total mileage among all five regions of the United States. At 5.5%, traffic in the West—a 13-state region stretching from California to Montana, and including Hawaii and Alaska—led the nation with the largest%age increase in unadjusted VMT, and continued an uninterrupted series of monthly increases that began in October 2013.

At 1.6%, the North Central—a 12-state area stretching from North Dakota to Ohio—had the smallest percentage increase in unadjusted VMT for the month.

Just watch this number go up when electric vehicles become cost competitive and the energy cost for additional miles is minimal.

Calgarygary may be correct on this one, at least until much lower cost shared 10-passenger ADV e-taxis become available by 2025 or so.

With more local jobs, traffic build up will probably continue for another 8 to 10+ years.

Calgarygary is spot on. Driverless BEVs will not only lower the cost of driving one mile by 50% to 66% versus gassers and dirty diesels it will also enable driving by kids, elderly and disabled. Traffic will go up a lot.

There will also be substation effects away from aviation and traditional public transportation. Driverless cars will take over a lot of short-distance aviation. When you can hail a car with a bedroom and a bathroom you can go to another destination 500 miles away while sleeping. Much more comfortable and time saving than flying where you really can’t sleep. Also train and bus transportation will not benefit as much cost wise by driverless tech so there will also be many that start using BEVs instead because they can now afford it.

The fact that we will see more road traffic probably nearly twice as much with driverless BEVs will ease the job loss that will occur in the global auto industry when it transitions from making gassers that last 200,000 miles to making driverless BEVs that last 1,000,000 miles. We only need to make 1/5 the number of vehicles but with traffic doubling it will be 2/5 the number of vehicles. Still there will be a lot of jobs that disappear in the global auto industry.

For once, Henrik's thinking mirrors mine, as in what will happen once we get AVs really going.
Will people drive all night sleeping in the back rather than fly?
Will people move an extra hour away from work to get a larger/cheaper house if they can sleep or work on the way in ?
How will the road infrastructure work in this case?
If you live the extra hour away, you will probably want to own your own car as you will be spending 4-6 hours / day in it - at rush hour times.
Also, if people start to use self driving vans to sleep in while commuting, they will use more fuel and road space, making life miserable for everyone else.
+ forget individual drivers in large cities, there won't be enough road space (even if you can sleep during the crawl in).
While you could put a child unaccompanied in an AV, would you want to ?
At what age could a child ride an AV unaccompanied ?

Mahonj a lot of thoughtful questions. I would not worry about kids driving alone. I drove alone to school every day on a bicycle since I turned 6 years old. It was a one mile trip almost and all the other kids did it as well. However, not all neighborhoods are alike. A driverless car would have a video link so you could accompany your kids online if needed.

I think driverless cars will lead to a much changed society with different living habits. However, other changes are coming like online virtual offices so that people does not need to drive anywhere to do office work. They will work from home in a virtual office. That will lessen the burden of more traffic. We can also build more roads where it is needed. Other things may happen. Will people buy groceries themselves or will they order it online and get them delivered by a driverless car. I think yes they will and that will lead to much better logistics and less driving. The society will change and for the better. We will all get wealthier from less costly transportation. Also not so many traffic accidents and no air pollution.

Price of fuels goes down then back up, people drive SUVs then more efficient vehicles, they drive more they drive less. This has been going on since the 1970s oil embargoes. The one thing we have not seen is a cohesive working together plan for that all elusive Energy Independence they keep talking about.

I think the laws will have to be changed before AVs have a real effect.
When laws allow you to be driven wile asleep or watching TV or drunk, and the cars to drive with noone in them, then we will truly have AVs.
However, I see little of this happening, most of the law changes are about letting people test them, not really use them.
So the technology will far outstrip the lawmaking.
Maybe, after a year or two, when they really show lives being saved, they will allow more types of use, but a car that drives itself, but requires a sober, licensed individual to be "in control" won't cut much mustard.

Colorado Department of Transportation this winter is starting some testing using volunteers with cell phones to monitor traffic to the mountains. This in anticipation of driverless cars. And of course it was in Colorado that Anheuser Busch tested a self-driving truck. I think Colorado and maybe other states may be working toward autonomous vehicles faster than you think.

To fully exploit the potential of driverless cars the law must be changed so that cars can be sold that does not have any human driver controls. No steering wheel and no pedals. Such cars can be permitted to be used by anybody including non-licensed drivers like kids and disabled or just people who does not have a driver license. For cars with human controls there may be a software lock around this so a licensed driver can disable the human controls before letting a kid drive it. Driving drunk in a car can only be permitted in cars with no driver controls or in cars that has been locked before the start of the journey. The police need to have an easy way to control that in every driverless car or it will not work. Otherwise it is a crime.

Cars without driver controls will also be less costly to make. It increases the cost by a few 1000 USD per car to engineer it with pedals and steering wheel. Today the law requires a physical connection between the steering wheel and the pedals to the power train. For some reason “fly by wire” is not allowed in cars and that rule make them much more costly to make.

Another amazing AI tech based on AI for self-driving cars that is able to identify people and see and understand what they purchases is now being promoted by Amazon that has developed it. Go and see for yourself it is truly amazing. You just go into a supermarket take your stuff and go again. The AI will have identified you using cameras and also seen every item you took in order to bill your bank account when you leave.

Wouldn't it make more sense to have driverless trains and subways before we have ADVs?

During the last early morning freezing rain + snow, we had hundreds of pill ups, including many city buses, police cars, towing trucks, small and large trucks, 4 x 4, cars etc. No ADVs were (yet) involved but one can wonder how ADVs would have handle such situation?