Audi and NVIDIA have combined their engineering and visual computing technologies in the past on Audi innovations such as Audi MMI navigation and the Audi virtual cockpit. Later this year Audi will introduce the next-generation Audi A8 featuring Traffic Jam Pilot—the world’s first Level 3 automated vehicle (as defined by SAE International) equipped with a first-generation central driver assistance domain controller (zFAS) that integrates NVIDIA computing hardware and software. (Earlier post.) 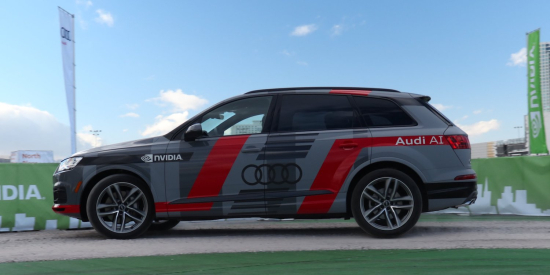 Scott Keogh, President of Audi of America and Jen-Hsun Huang, Founder and CEO of NVIDIA, announced their companies’ newest collaboration during the opening keynote of CES 2017.

The vehicle learns from both the road and the driver in every mile it travels and can handle unpredictable situations such as roadblocks, construction and changes in weather. This demonstration illustrates the power of end-to-end deep learning and how it will be one of many neural networks running simultaneously inside of an artificial intelligence car.

The vehicle relies on its trained AI neural networks to recognize and understand its environment, then drive safely around the track without any computer programming. With no driver behind the wheel, it performs several laps on a closed course, where the configuration of the track will be modified in the middle of the demonstration.

The course features a variety of road surfaces including areas with and without lane markings, dirt and grass, as well as a simulated construction zone with cones and dynamic detour indicators.

Audi will expand testing of highly automated, artificial intelligence-equipped vehicles on public roads in California and select states next year. As it has throughout its research of automated vehicle opportunities, Audi will maintain a spirit of transparency with state and federal regulators in the US as it conduct its artificial intelligence testing and eventual vehicle system deployment to the public.

In parallel to delivering artificial intelligence solutions for complex urban driving, Audi brings to market this year the world’s first vehicle to meet the standards of Level 3 automation as defined by SAE International.

This system will give drivers the option to turn over steering, throttle, and braking functionality to the vehicle at speeds of up to 35 mph when certain conditions are met, aiding Audi drivers during their often stressful freeway commutes.

Here are the SAE definitions:
https://www.sae.org/misc/pdfs/automated_driving.pdf

So Level 3 remains a grab the steering wheel job,and so in my view not just useless but actively dangerous, as it demands full attention, ore so then when simply driving the car as you not only have to realise that the car is about to screw up, so delaying your reaction times prior to intervention, but the car doing almost all of the work including steering up to that point makes it difficult or indeed nearly impossible to sustain full alertness.

They need to keep these death machines on the testing track, until they can release Level 4.

One year ago most of the old automakers said the fully self-driving cars would by ready by 2025. This year they say they will have them ready by 2020/21. And Tesla says it will be ready for their cars with autopilot (Hardware version 2) by the end of this year. Quite a change in just one year. Not so much is happening with batteries or FCV. The development cycles for electronics and software is just 10 times faster than it is for big items like BEVs and FCV or gassers that require massive factories to become a volume reality.

So Davemart’s chicken brain still cannot phantom that level 2 and level 3 ADAS are already saving life whenever the human driver gets so inattentive that an accident would have occurred was it not for the ADAS that saved the day and prevented the accident because it was able to steer the car safely in that situation. The thing about autopilots is that they are never inattentive like humans and they never get tired. The only problem left to solve is to make the autopilots handle all driving situations like humans can. However, level 2 and level 3 ADAS are already saving life and result in fewer accidents than cars without any ADAS systems. Exactly how much is hard to say. Only Tesla is systematically collecting this info and they have not yet gathered enough data to make really good scientific conclusions. There is only one documented traffic death with ADAS activated compared to 1.2 million death per year. And Davemart want to shot down the entire global industry development because of one death with ADAS. LOL.

Moreover, the faster we develop these systems the more people will be saved because when we reach level 4 and 5 the number of accidents could drop at least 50% and over 90% when the systems get more mature by 2020 to 2025. We do not need idiots like Davemart to slow down this progress by their unfounded criticism.

"chicken brain still cannot phantom"
NO insults and the term is "fathom".

I agree with Change, but he certainly should have been more diplomatic to Davemart.

My apology. It was unnecessary to insult Davemart. I get a little carried on sometimes.