Mitsubishi Electric Corporation, along with Mitsubishi Electric US, Inc., will display a future concept of the recently released new model of its Mitsubishi Mobile Mapping System, the MMS-G22, at CES 2017. The MMS-G220 is a highly accurate measuring system using car-mounted GPS antennas, laser scanners and cameras. (Earlier post.)

The system gathers 3-D positioning data of road surfaces and roadside features to an absolute accuracy of 4 inches (10 cm), allowing the creation of comprehensive 3D maps to the level of accuracy needed to support autonomous driving.

The MMS-G220 can be used in a wide range of applications, such as the precise surveying of infrastructure and is especially suited to autonomous driving systems. It is easily mountable, allowing compatibility with multiple car types. The detachable roof-mounted main unit is smaller and lighter than existing models while maintaining the same level of accuracy, allowing broader usage and mounting on a variety of car types. Its improved portability will also facilitate periodic maintenance and inspection. 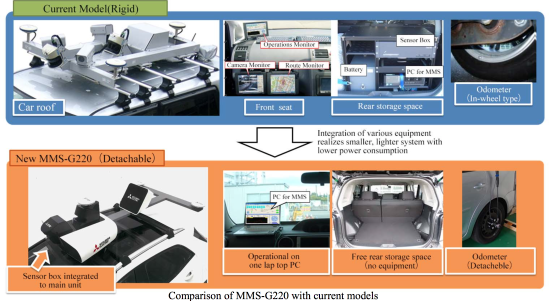 The previous model required various equipment to be set up inside the vehicle. Integrating this equipment results in a reduction in power consumption, increased operability and more efficient collection of data. Improvement in operability and easier data portability are achieved through the combination of monitors and keyboards with a high performance laptop and the utilization of high-speed USB connectivity.

Additional software reduces the number of on-roof equipment, while retaining similar capabilities to those of the current model but with lower power consumption, making it possible to power the system from the in-car cigarette lighter socket. The integration of in-vehicle equipment enables simplified wiring, leading to easier installation and more convenient operation.

The system will also make good use of Japan’s Quasi-Zenith Satellite System (QZSS), which will begin operating in 2018. The QZSS will be formed from a constellation of Japan’s positioning satellites, which Mitsubishi Electric developed in support of the Office on National Space Policy, Cabinet Office (Government of Japan).

The satellites will be in geosynchronous orbit with an inclination of 45 degrees in order to pass near their zenith over Japan and above the Asia-Oceania region. This will provide seamless service regardless of geography. It will also significantly improve the accuracy of positioning in areas where signals from GPS satellites cannot be clearly received due to skyscrapers or natural terrain.

A lot are quoting 1cm accuracy as needed for AP, not 10cm.

That hits a lot of curbs.

Does it have to be 10X to 20X more accurate than the average human driver and how many times faster?

I assume that the 10cm resolution is for a location map vis speed zones and recomendation, routes, stops and processor conflict resolution and is up or down loaded to memory or the 'cloud' while the on board sensors would give the much higher resolution needed for positioning on the fly.

On a recent bus journey in Sydney CBD, the bus had to wait in multi lane traffic as the clearance was close to 1cm either side when the kerbside obstacles and offside traffic pinched.

I was thinking "this is an example where a well designed autonomous would allow the vehicle to proceed."
Unreasonable expectations placed on the driver would have been no obstacle if there were 10cm either side.