Tesla and Panasonic begin production of Li-ion cells at Gigafactory

Tesla and Panasonic have begun mass production of high-performance cylindrical “2170” (21mm diameter, 70mm height) lithium-ion battery cells at the Gigafactory in Nevada. The output will first be used in Tesla’s energy storage products and then in the Model 3.

The 2170 cell was jointly designed and engineered by Tesla and Panasonic to offer the best performance at the lowest production cost in what they determined to be an optimal form factor for both electric vehicles and energy products. (Slightly larger than 18650 cells—18mm x 65mm). 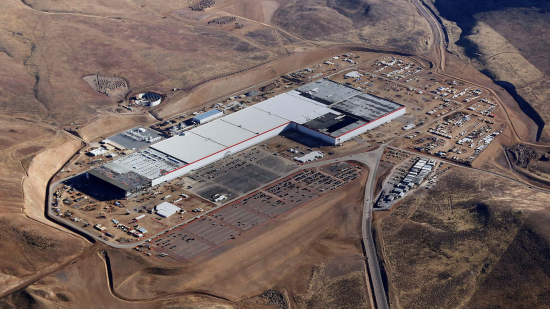 Production of 2170 cells for qualification started in December; production has now begun on cells that will be used in Tesla’s Powerwall 2 and Powerpack 2 energy products. Model 3 cell production will follow in Q2. By 2018, the Gigafactory will produce 35 GWh/year of lithium-ion battery cells, nearly as much as the rest of the entire world’s battery production combined.

The Gigafactory is being built in phases so that Tesla, Panasonic, and other partners can begin manufacturing immediately inside the finished sections and continue to expand thereafter.

The phased approach also enables for learning and continuous improvement of the construction and operational techniques. The current structure—representing 30% of the final building—has a footprint of 1.9 million square feet housing 4.9 million square feet of operational space across several floors. Tesla expects that when it is complete, the Gigafactory will be the biggest building in the world.

Tesla anticipates that the Gigafactory will enable the cost of battery cells to decline due to increasing automation and process design to enhance yield, lowered capital investment per Wh of production, the optimization of locating most manufacturing processes under one roof, and economies of scale.

In 2017 alone, Tesla and Panasonic will hire several thousand local employees and at peak production, the Gigafactory will directly employ 6,500 people and indirectly create between 20,000 to 30,000 additional jobs in the surrounding regions.

35 Gwh of cells at 150 USD per kwh is 5.25 billion USD of cells per year. Tesla currently is able to sell their Powerpacks for about 380 USD per kwh. That price will probably drop significantly in the coming years although all of Tesla’s competitors charge more per kwh for grid backup solutions.

Tesla's end goal with their coming giga factories is that they produce everything under one roof that it takes to make a finished car or powerpack. Raw materials go into the back of the factory and finished cars and Powerpacks go out of the front of the factory. All the different companies that are needed for that to happen will have their own part of the factory floor to set up their own production. So Panasonic is doing battery cell assembling and another company is making battery membranes another making anode material etc.

Tesla plans for 1 million cars to be made at each future giga factory per year. They need the factories to be that big to make it worthwhile for other companies to come and set up production inside these factories instead of shipping it from abroad. All cars made will be self-driving and last 1 million miles so each gigafab will make the equivalent of 5 million gasses per year.

Tesla and Panasonic said that if the Giga factory only made cells it will be big enough for 150 Gwh of cell production. So far we know that Tesla will make power packs, cells, vehicle packs, power electronics for vehicles and power packs and electric engines for the vehicles.

I may also add that if all 35Gwh of cells where used for Model 3 production that require a 55kwh pack for the minimum battery configuration it is enough to make 636,000 Model 3 cars per year. However, a lot of cells will also be used for Powerpacks and Model 3 will have versions with larger battery packs like 80kwh that will give it over 300 miles range.

Secondly, many mega factories can be built and operated a lot cheaper in China and many other countries such as So. Korea, Vietnam, Mexico, Brazil, Poland, Turkey, Taiwan, Malaysia, Singapour, etc.

Thirdly, batteries will evolve and will become cheaper to mass produce. Mega factories are a good solution, specially where batteries will be used on the spot. Competition will be interesting.

Cost reduction depends on where you are on the curve, costs may come down a bit, but don't expect drastic reductions.

OK, what are the specs for the 2170 batteries and when can I buy them.