Audi presented the Audi Q8 concept at the North American International Auto Show (NAIAS) 2017. Combining the spaciousness of an SUV with the lines of a coupe, the Q8 concept features a plug-in hybrid powertrain. The concept full-size SUV is the basis for a production model that Audi will launch on the market in 2018; whether or not the first production version will be a plug-in hybrid has yet to be determined. 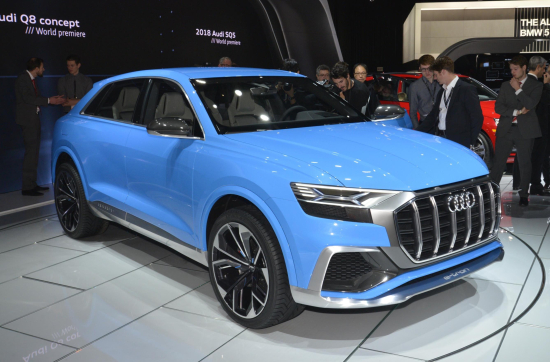 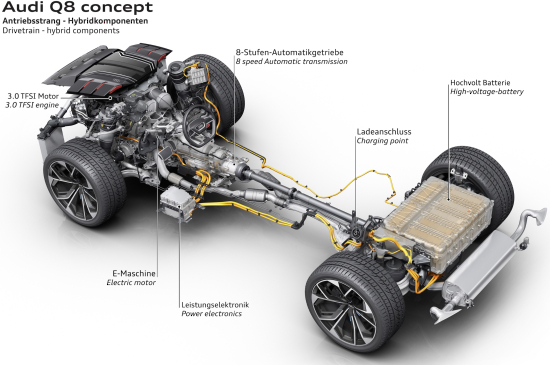 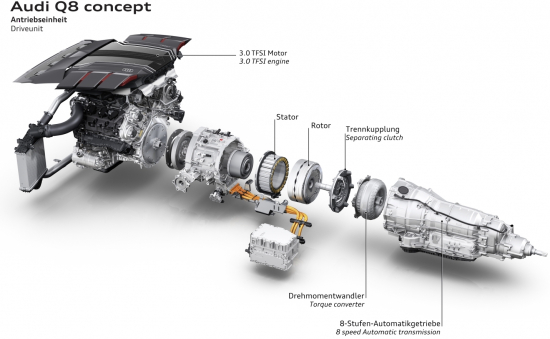 The 17.9 kWh lithium-ion battery pack located in the rear comprises 104 prismatic cells, and enables an electric range of 60 kilometers (37.3 mi). Total range with the TFSI engine is up to 1,000 kilometers (621.4 mi). A full charge with 7.2 kW output takes about two and a half hours. 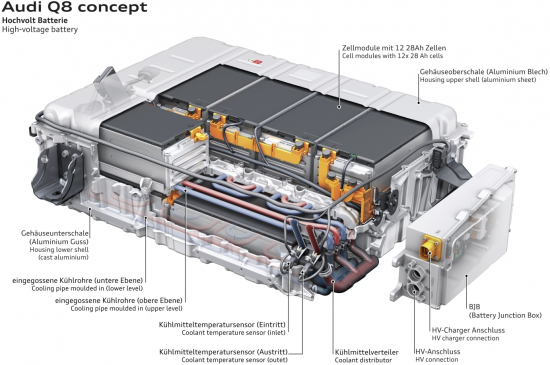 When driving, the hybrid management system controls the operating states of the Audi Q8 concept intelligently and flexibly. The full-size SUV can boost, coast and recuperate as appropriate for the situation. The predictive efficiency assistant, which in production models supports the driver, provides the hybrid management system with highly detailed information about the near surroundings for this purpose. Route data from the navigation system and Audi connect Car-to-X services are also considered.

The driver controls the Audi drive select system via a prismatic satellite button on the flat-bottomed steering wheel, just like the start-stop system. There is a choice of three driving modes: “EV” mode prioritizes electric driving, while in “hybrid” mode the decision regarding the drive type is left largely to the hybrid management system. In “battery hold” mode, it saves the available electric energy for a later time.

In the Audi Q8 concept, the quattro permanent all-wheel drive system delivers the power of the hybrid drive to the road with supreme control. At the cornering limit, it works closely with the wheel-selective torque control. This minimally brakes the inside wheels, which further enhances dynamics and stability.

The concept car also uses high-end production solutions for its wide-track suspension. The adaptive air suspension sport—an air suspension system with controlled damping—allows a wide range from cushioned cruising to firm and tight handling. In addition, it sets the ground clearance in two levels, with 90 millimeters (3.5 in) height difference, to the ideal level in each case. The front and rear suspensions are engineered as lightweight five-link designs.

At 5.02 meters (16.5 ft) long, the Audi Q8 concept features a wheelbase of three meters (9.8 ft), t offering plenty of space for passengers and luggage. Despite the sloping, coupe-like roofline, even the rear-seat passengers enjoy ample head and shoulder room. The control concept uses large touchscreens in the cockpit and is rounded out by an expanded version of the Audi virtual cockpit and a contact-analogue head-up display. The latter uses intelligent augmented reality technology that merges the real and the virtual worlds. 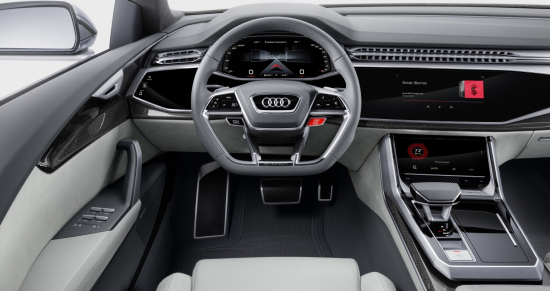 Controls and displays. Information and commands are passed primarily through touch displays augmented by the Audi virtual cockpit and a contact analogue head-up display. All displays feature a new “digital design” that concentrates systematically on the most important things.

The contact analogue head-up display projects important displays onto the windshield in the driver’s direct field of view, seemingly placing them in the real environment. A navigation arrow, for example, appears in the same position as an actual arrow on the road—an intelligent application of augmented reality. The notifications from the driver assistance systems also merge the virtual and physical worlds.

The Audi virtual cockpit future is even more dynamic thanks to new functions, and with a resolution of 1920 x 720 pixels displays graphics with more detail than ever before. In “auto” display mode, the 12.3-inch TFT display offers generous space for maps, lists and additional information. The top-down map view visualizes the selected route. When zooming in, the current position and surroundings are displayed in 3D. Through the buttons on the steering wheel, the driver can switch to “performance” mode. The needles of the speedometer and powermeter now appear in a foreshortened, three-dimensional display.

All other monitors in the Audi Q8 concept are touch displays. The great strength of this principle is the direct, fast and intuitive operation. Drivers select each function exactly where they see it. Audi was also able to reduce the number of buttons, switches and levers thanks to the touchscreens. The interior now appears even neater and cleaner.

The MMI monitor in center of the dashboard is used to control the infotainment system and for vehicle settings. A display for the climate control system is integrated into the diagonal section of the center console. The driver’s wrist rests comfortably on the low selector lever of the eight-speed tiptronic while using this display. If the sensors in the seat detect a front-seat passenger, the touchscreen displays their climate control settings. This function is not available when the driver is traveling alone. Another touchscreen is reserved for the lighting functions.

At least this concept is a real vehicle unlike the VW below. Figure on maybe 45 km (28 mi) SAE unless you try to impress everyone with the acceleration.