The Schaeffler Group, a global integrated automotive and industrial supplier, sees e-mobility, Industry 4.0 and digitalization as the key opportunities for the future, said CEO Klaus Rosenfeld at the company’s press conference at the North American International Auto Show (NAIAS) in Detroit.

One example is a P2 high-voltage hybrid module with an integrated torque converter (iTC). The hybrid drive/torque converter combination is also extremely efficient, as the torque converter lock-up clutch closes immediately after launch creating a solid mechanical connection between the transmission, internal combustion engine and electric motor. The hybrid powertrain has a very compact design due to the iTC which requires less than 100 millimeters additional space on average.

Schaeffler’s engineers in North America and Germany are already working on the first volume production solution for a US customer.

Schaeffler is also developing a two-speed electric axle (P4) for hybrid and fully electric vehicles. Marc McGrath, Schaeffler’s President Automotive Americas, says that the company is targeting the system to the US small SUV and crossover market as an alternative to conventional all-wheel drive.

Schaeffler is also working on a wheel hub drive, which packages all the necessary components—the electric motor, the power electronics, brakes and cooling—within the wheel rim. This saves space that can be used for new interior design concepts. The wheel hub drive has an obvious application in self-driving taxis or nimble, autonomously driven passenger cars which transport the residents of large cities over short distances in the future. Developers also have their sights on new “people movers.” These are ultra-compact, autonomously driven vehicles which take passengers the “last mile” home after using traditional public transport systems. 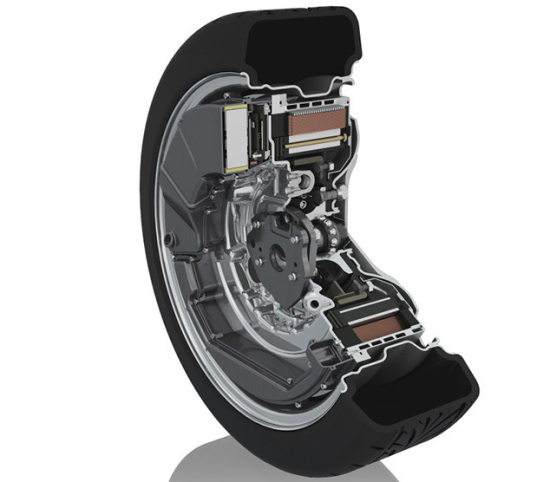 Schaeffler is also developing for 48V systems. At the show, presented the “Schaeffler High Performance 48 Volt” concept vehicle. In this concept, an electric rear axle supplements the front axle drive which comprises a conventional internal combustion engine and belt-driven 48 volt starter generator. The arrangement is a new combination of the conventional P0 topology and an electric axle in a P4 arrangement. 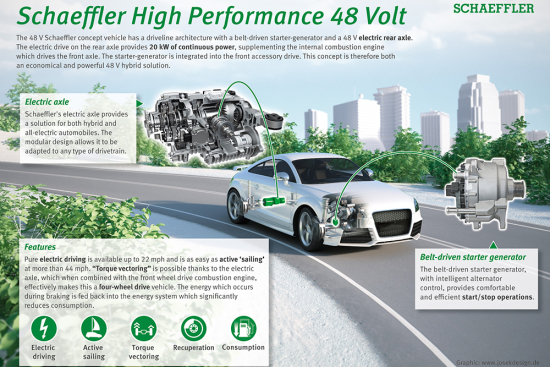 The electric motor and the associated power electronics are integrated into a single unit on the rear axle. Twenty kilowatts of purely electric power is thus permanently available from the 48 volt axle drive. The Schaeffler electric axle produces a starting torque of up to 2,000 N·m.

The 48 V architecture allows different driving strategies to be selected in order to reduce CO2 emissions and increase driving dynamics, such as emissions-free, purely electric driving up to 35 km/h in areas where traffic is restricted. The vehicle can also sail at speeds of up to 70 km/h. The electric axle therefore allows a constant speed to be maintained. In the WLTC driving cycle, the majority of braking energy is recaptured as electrical energy and stored in the heavy-duty battery.

Digitalization. Schaeffler launched a digitalization offensive last year, a central pillar of which is the development of intelligent components and systems for automated driving, electrification and networking.

This development is an enormous opportunity for Schaeffler. Our components and systems are needed precisely where stresses, forces and torques occur: in the powertrain and in the chassis.

If these components, such as the bearings used in the chassis, are fitted with sensors to measure torques, forces, vibrations and temperatures, it is possible to capture vital information about the condition and use of both the module and the entire system.

Schaeffler has already laid the technical foundations for the integration of these sensors and actuators into components by developing the Sensotect bearing which collects measurements using nanostructured coatings.

The important thing here is not just that we are capturing data but that we are also able to interpret them correctly and convert them into actions.

Adding sensors to automobiles or industrial equipment generates volumes of data which have to be interpreted and converted into added value. In October 2016, Schaeffler entered a strategic partnership with IBM in this area.

Over the next few years, Schaeffler is planning to take on a large number of experts in the fields of data architecture, data analysis, design thinking, app development and business modeling in order to develop innovative applications for the automotive industry and other sectors.

New technologies will allow Schaeffler to extend the functionality of components and systems through data generation and preparation. Schaeffler is showing an active mechatronic roll control system at NAIAS. It keeps the vehicle’s structure horizontal when driving round curves and irrespective of the condition of the road surface.

In this mechatronic system from Schaeffler, which is now in volume production, a particularly efficient electric actuator compensates the rolling motion of the vehicle for the first time. The next generation of this actuator will have the potential to also act as a sensor which will capture 3D data on the condition of the road. If combined with accurate GPS and intelligent evaluation systems, it would be possible to produce real-time information that could be useful to vehicles following behind or in front or the infrastructure operator.

A smart bearing is very handy for closed loop diagnostics incl balance,vibration, wear, possibly heavy duty ABS or aircraft spin ups for soft landings etc
20KW e is getting seriously interesting for we two wheel tragics.
Wonder if that will ever work with a longer serpentine belt drive?
With the in wheel option, suspension components will need to be clean sheet, possibly full active.

Why not use 2 such 48 volt e-motors of 20 kW (continuous output, as above, peak power usually can be 40-50% higher) on the rear axle with e-differential?
And make it a PHEV with battery 4-10 kWh.
PHEV makes sense even if used just for AC compressor (especially w/ start-stop systems), with 2-4 kW power requirement on a hot day, the car can be pre-conditioned before start.
For city (non-agresive) driving, up to 70 km/h on level road 40 kW of power would be sufficient for cars weighing up to 1,300 kg, approx.
Strange that nobody even mentions 48V PHEV, and at the same time they keep repeating that 48V (ie 60V) system is significantly cheaper to build (than higher voltages, used for full hybrids) as they don't need to implement high voltage protection.
Some may say that as soon as you connect it to 120V (or 220V) AC for charging, it's no longer low voltage system (60 V or less). But many cars in Canada come with block heater that connects directly to 120 V AC, and nobody asks a question.
Several very small BEVs use 48V battery and single motor drivetrain, like Mahindra e2o, Renault Twizy.
So why not make a 48/60 Volt PHEV with 2 (or 3) e-motors, each 20 kW, as above?