Oberon Fuels, a producer of clean-burning Dimethyl Ether (DME) transportation fuel (earlier post), announced the first customer demonstration of a DME-powered Mack truck, a Mack Pinnacle. Oberon and Mack are working with the NYC Department of Sanitation (DSNY) to run the vehicle at the Fresh Kills Landfill and evaluate performance and overall drivability. The test is the first step in the city’s evaluation of both DME trucks and DME fuel as a potential long-term strategy to help reduce greenhouse gas emissions by 80% by 2050 and to achieve the city’s goal of sending zero waste to landfill by 2030.

The goal of the demonstration is to gather data on the use of DME fuel and vehicles in urban, heavy-load fleets. At scale, such a program could convert hundreds of thousands of tons of organic waste into clean fuel, reducing emissions, waste, and costs for cities while improving overall air quality and creating jobs. 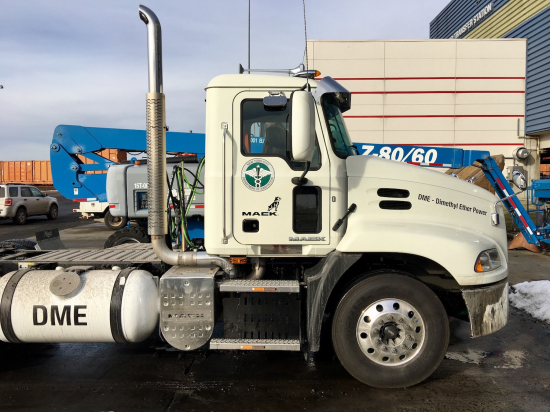 DME fuel, which is approved for use in all 50 states, delivers the same performance as diesel and burns cleanly without producing any soot. When produced from local organic waste, DME can reduce greenhouse gas emissions by 68-101% compared to diesel as calculated by the US Environmental Protection Agency and recently published by US Department of Energy’s Argonne National Laboratory.

These greenhouse gas reductions make it one of the first fuels for heavy-duty trucking that can result in a net CO2 reduction. DME engines are also easier to maintain, offer excellent cold weather performance, and run quieter than diesel counterparts.

The vehicle being tested is a Class 8 Mack Pinnacle model truck equipped with a 13-liter engine.

Over the course of the demonstration, the truck will use Oberon’s fuel-grade DME, produced with the company’s proprietary catalytic distillation technology. The small footprint of Oberon’s production units allows them to be easily placed near local feedstock sources (e.g. food waste, landfill gas, animal waste, wastewater treatment gas), providing cities an opportunity to deal with both their waste and energy challenges – local feedstock, local production, local consumption.

Currently, one-third of all waste on the curb in New York is organic. By recycling organic waste into DME fuel, New York and other cities can reduce land fill use, lower overall emissions, and improve overall air quality. The benefits of DME make it a great use of organic waste as part of any city’s overall sustainability plan.

The demonstration is expected to run in the first quarter of 2017 with results and analysis complete in mid-2017.

DME does burn cleaner, it is an uphill battle to convince companies to turn natural gas into DME which burns like synthetic propane. The tank pressures are lower, but it is a big investment. A carbon tax would help in selected areas.

Hard to see too many downsides beyond supply chain duplication and cost structure.

As you said a big investment but then for the optimum target market landfill biomass to synthetic and similar emission intensive areas, there are already greenhouse mitigation incentives if not accompanied by $ incentives.