Ford is launching a multi-million pound project designed to help improve air quality in London. The project, supported by Transport for London, features a 12-month trial of 20 new plug-in hybrid (PHEV) Transit Custom vans that reduce local emissions by running solely on electric power for the majority of city trips such as deliveries or maintenance work.

Ford plans to introduce a Transit Custom PHEV van on the market in 2019; the Transit Custom PHEV vans in the London trial are an advanced prototype design that allows them to be charged with mains electricity for zero-emission journeys, while featuring an efficient on-board combustion engine for extended range when longer trips are required. Ford is the first volume manufacturer to offer PHEV technology in this segment of the van market. 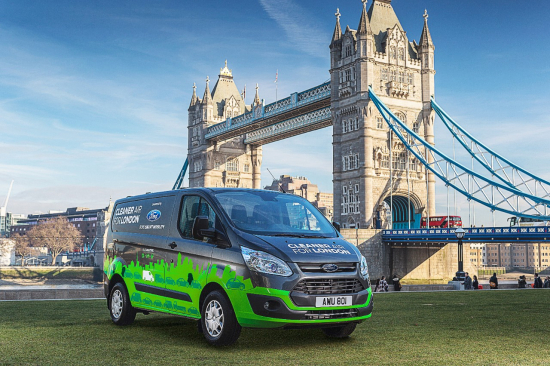 The trial fleet will operate in everyday use across a cross-section of city-based businesses, using a Ford telematics system to collect data on the vehicles’ financial, operational and environmental performance to help understand how the benefits of electrified vehicles can be maximized.

Development of the 20 Transit Custom PHEV fleet trial vehicles has been supported by a £4.7-million (US$5.8-million) grant from the Advanced Propulsion Centre. The vans are being designed and engineered at Ford’s Dunton, UK, technical center, and at Prodrive Advanced Technology in Banbury, UK, with program support from Revolve Technologies.

Teaming up with our London partners, we will also be able to trial software and telematics with enormous potential to reduce emissions and costs in the city. This new type of partnership demonstrates our evolution to both an auto and mobility company. We have lots of work to do, but everyone is so energised by this breakthrough opportunity.

Scheduled to launch in autumn this year, the fleet trial is part of Ford’s commitment to work with major cities around the world to tackle their local transport challenges, and help people and goods move more easily.

The freight sector’s transition to ultra-low emission vehicles is central to cleaning up London’s toxic air. Transport for London continues to lead by example by increasing the number of its own vehicles that are electric and will find the data from these trials an invaluable resource for the LoCITY program, which encourages the uptake of low emission commercial transport.

The Transit Custom PHEV is just one of 13 new global electrified vehicles Ford is launching in the next five years. This total includes a fully electric SUV with an estimated range of at least 300 miles, a high-volume autonomous hybrid vehicle designed for commercial ride hailing or ride sharing to debut in North America in 2021, and a hybrid version of the iconic Mustang sports car. Ford also has a memorandum of understanding with several other automakers to create the highest-powered charging network for electric vehicles in Europe.

LoCITY is an industry led initiative developed by Transport for London to improve air quality and reduce carbon emissions by lowering the impact of freight and fleet vehicles on the environment.

I think that a plugin hybrid van for in city deliveries is a good idea but the article is completely devoid of any technical information on what size the battery is and what electric range might be expected, etc.

@SD: agreed no numbers at all. It (PHEV) sounds really good though, especially in larger vehicles like vans.

Hybrid setups are ideal for fleets, lower maintenance, less overhead than full on EVs and they work well with onsight generation needs.

The van and truck segment desperately need hybrids. Hybrids make more sense in larger vehicles than they do in smaller ones. Much quicker returns. Especially in vehicles that do lots of stop and go.

Unfortunatly the USPS made it hard for vehicles, but UPS and Fedex, Walmart, and every other company thats invested in transportation is currently working on a long term solution.

My hopes is for a transit van/expedition/F-150(and other companies equvalents) with >~30mi range EV. Biggest setback will be Gross vehicle weight. Because of the way things are taxed and licenced in the USA, car makers can only make certain cars.

I'd like engineers, and carmakers, and governements to sit down together, and make a singular list of global rules and standards (especially on plugs for EVs, competing technologies really muddy up the water for consumers, it would be akin to going to the gas station and having differnet filler sizes for every grade of gasoline, and having some stations not sell your grade)

I am of the philosophy of getting the masses quickly as possible. Full on EVs arent there yet. But PHEV are there, and are in the price range of comperable gasoline cars.

If everyone had a 30mi range PHEV, and had a way to charge it, our gasoline consumption would drop drastically. (enough so that waste to fuels would be viable). Full EVs/H2Vs as they become viable could slowly work their way into the fold and be a seamless replacement to petroleum fuels. You don't have to run the full gambit, you can get 90% of the way there relitively easy, and in the next 20years.

Note that the push to electrification is to reduce urban pollution rather than CO2. Urban pollution is a problem we can see and smell here and now, in many cities across the world, from Beijing to Paris and is killing people in the same cities (especially China and India).

The problem here is to replace (especially old) diesels with cleaner vehicles without bankrupting tens of thousands of businesses (or taxpayers).

Make them hybrid with an upgrade option to PHEV later on.

@SJC: or
Make them PHEV with a modular battery so it can be tuned to typical use.

Starting with fewer cells conserve them for applications that really require them. Starting with a PHEV design and fewer batteries makes more sense, larger motor and controller.

Conserve them for other applications? What, are we in a resource constrained world? Just make more, if the demand is there. It may take a little time to build the supply line, but it can be done.

It is always a resource constrained world in one way or another.
Lithium batteries will be in great demand going forward with cars, buses, trucks, trains and buildings.