Mitsubishi Motors Corporation (MMC) announced that through its local importer and distributor MMC Ukraine, MMC will supply the National Police of Ukraine with 635 units of the Outlander PHEV. These vehicles are to be delivered around July 2017.

The supply stems from an emissions trading agreement signed by a number of Japanese companies with the Government of Ukraine. As part of its policy to reduce CO2 and greenhouse gas emissions using the Green Investment Scheme under the Kyoto Protocol, the Ukrainian government will use the Outlander PHEVs as police vehicles. 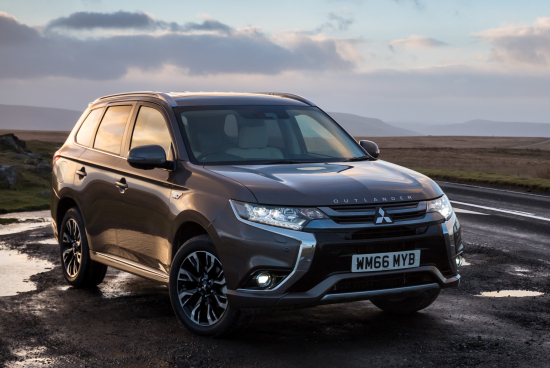 This marks the second time MMC has supplied vehicles under the Green Investment Scheme, the first being to deliver of 507 units of the i-MiEV all-new electric vehicle to the Government of Estonia starting in October 2011.

Since its launch in 2013, the Outlander PHEV has recorded cumulative sales of 80,768 units (as at the end of 2016) and has been ranked as the best-selling plug-in hybrid vehicle in Europe for four years in a row.

Mitsubishi has extensively revised the Outlander PHEV for 2017. A new EV Priority Mode is available across all variants. Once activated, it allows the driver to operate the vehicle in EV mode without the engine starting, provided there is sufficient charge in the batteries. An electronic parking brake is also new to the 2017 Outlander PHEV, as well as the brake auto hold button function which, when activated, holds the vehicle in traffic or on an include the same way a handbrake would, allowing the driver to release the footbrake.

Across all variants, the 2017 Mitsubishi Outlander PHEV powertrain and chassis has been revised, with new dampers and rear suspension bushes, making it a quieter and more refined to drive. Rapid charging has also been improved, reducing its charging time to 80% from 30 minutes to approximately 25 minutes, and its pure electric range is increased to 33 miles, up from 32 miles.

The 2017 Outlander PHEV also delivers more performance with improved acceleration in EV mode compared to its predecessor. CO2 emissions have also been lowered by 1g/km to 41g/km, with an average weighted fuel consumption of 138 mpg US—a 6.4% increase versus the previous version. Regenerative braking technology, which works to put lost energy back into the battery when slowing down and which can adjusted while driving using the steering wheel paddles, has also been upgraded for 2017 Outlander PHEV—the drive battery output has been improved by 10%.

Safety features have also been further developed and improved on the 2017 Mitsubishi Outlander PHEV. Forward Collision Mitigation technology, standard on the Mitsubishi Outlander 4hs and 5hs versions, now features Pedestrian Detection for added safety, while Blind Spot Warning and Rear Cross Traffic Alert have both been introduced on the 4h variant to assist the driver when reversing out of a space. For example, if traffic is coming from the right, the icon located on the right-hand mirror will light up, accompanied by an audio alert.

The Outlander PHEV offers an ultra-smooth driving experience, with a 2.0-liter gasoline engine and a seamless transition between three driving modes (EV, series hybrid, parallel hybrid), which combine to deliver optimum performance regardless of driving conditions.

The Mitsubishi Outlander also offers adaptive four-wheel drive with twin electric motors driving the wheels. The front and rear axles are each equipped with their own high-output motor to deliver acceleration even more powerful than a 3.0-liter gasoline engine, while maintaining responsive 4WD performance.

The Green Investment Scheme is an international emissions trading plan which provides for funds deriving from the transfer of Assigned Amount Units (AAUs) in emission trading pursuant to Article 17 of the Kyoto Protocol to be used for the purpose of reducing greenhouse gas emissions and other environmental measures.

Assigned Amount Units represent the allowable level of emissions assigned to a developed country party with a specific emissions target under the Kyoto Protocol.

Can someone translate this article into "Caveman Lawyer" speak? There is no point to this writeup. Also, how much does this beast cost? When does the service minder tell me to do an engine relube? I need to know. Also, I want to know what the Kyoto protocol is when I have to scrape this beast?

Here you go (https://www.mitsubishi-motors.com.au/vehicles/outlander-phev) they have been on sale in Australia for a few years now.