An electric-drive Extra 330LE aerobatics plane recently set a world record in ascent in the category of “Electric aircraft weighing up to 1,000 kilograms. The pilot reached an altitude of 3,000 meters in only four minutes and 22 seconds, beating the previous record by one minute and 10 seconds. The airplane rose into the air at 11.5 meters per second.

The plane is equipped with a SP260D electric drive system from Siemens that has a continuous power output of 260 kW, continuous torque of 1,000 N·m, weighs only 50 kg, and thus offers an excellent power-to-weight ratio. (Earlier post.) Pilot Walter Extra broke the previous record set by the American pilot William M. Yates in 2013. The World Air Sports Federation—Fédération Aéronautique Internationale (FAI)—recognized the record-breaking flight. 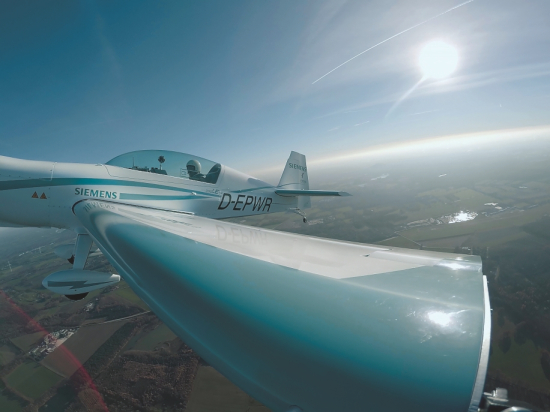 This is a milestone on the path to electrification in aviation. This enormous achievement was possible only with digital technologies that enabled us to push our drive train to its technological limits.

—Frank Anton, who heads eAircraft within Siemens’ next4 startup unit

The Extra 330LE, which weights approximately 1,000 kilograms, serves as a test vehicle for the new drive. Its first public flight was in July 2016. (Earlier post.) For Siemens AG eAircraft, this record is proof of the performance of the SP260D drive system and its efficient integration into the airplane built by Extra Aircraft OEM.

The Extra 330LE two-seater will be the test aircraft for the coming years, when the goal will be to analyze and further develop how the individual components of its propulsion system work together. Siemens will also bring the technology to its electric flight collaboration agreement with Airbus, which the two companies signed in April 2016. (Earlier post.)

They want to prove the technical feasibility of hybrid electric drive systems for regional aircraft with up to 100 passengers by 2020. This will require power ratings of up to 10 MW.

The two partners plan to develop hybrid electric regional aircraft on the basis of the record-breaking motor.

We expect to see the first aircraft with up to 100 passengers and a range of approximately 1,000 kilometers by 2030

Air, ground, underground, pipelines and sea transports have been developed and evolved to move people and goods as efficiently, as safely and quickly as possible.

One of the least efficient method is still by air. Current planes liquid fuel engines are not very efficient, noisy and polluting.

Future electrified and/or hybrid planes (and trains) will be quieter, more efficient and run cleaner.

Larger extended range e-planes may have to use PEM/FCs and CH2. Take-offs could be assisted with aircraft carrier style hydraulic launching facilities to increase range and payload.

>>>>>>>>>"@Roger you can’t retrofit a hydrogen powered aircraft from an existing aircraft. "

Yes, you can. I've done all the calculations, taking into account the volume of LH2 required and the volume under the seating floor of an airliner. It is entirely possible without any loss of passenger space nor cargo space. You can try to do it yourself if you care to.

However, to really save more fuel and save energy and save internal space by reducing the volume of LH2 fuel, a re-design will be necessary to incorporate smaller wings, smaller tails, smaller engines, and smaller wheels and landing gears...at about 60% the size of the kerosene-powered aircraft to adjust to the much lighter weight of the LH2. Only the fuselage will need to remain the same. With this type of re-design, it only takes 30% of LH2 fuel energy to fly a long-range aircraft for a given cargo weight as compared to using much heavier kerosene. On a long-range flight, 66% of the useful load weight is fuel weight when using kerosene. Using LH2 on an aircraft optimized for LH2, the proportion of fuel weight WRT useful load is only about 30%.

Mass (kg) is critical for aircraft. It's mostly a factor for ground vehicles during acceleration.

A lot of times, greater inertia is not a bad thing. Think about wind gusts. A heavier object tends to be less affected by extraneous vectoring forces.

@Roger what you suggest the Russians did in 1988 with a passenger jet for 150 people the tu- 154. They converted it to fly on LNG or LH2 and the link below show a picture with at most 20 seats left after the conversion. They made 95 flights on LNG and 5 on hydrogen before shutting the project down.

As long as we have kerosene LH2 or LNG is not goanna happen in aviation.

Battery powered aviation has a chance to compete with kerosene on price and speed so it will happen when the batteries reach 400wh/kg and higher and practical ranges like 700 to 1000 miles become achievable.

Musk’s aircraft design will enable 70% of the weight of the aircraft to be batteries. Only 35% of a kerosene aircraft is fuel. Musk will save weight by getting rid of the cockpit by using Falcon 9’s autopilot. Musk will save weight by using electric engines that can have much higher power density than possible with kerosene jet engines if you use superconductive electronics and magnets some 50 k watt per kg should be achievable. 10kw/kg is what the best jet engines and the best electric engines without superconductive power electronics can do. Musk will save weight by getting rid of landing gear with wheels and use the landing gear for falcon 9 instead. He will also save weight by using steering fans instead of elevator and rudder and forgo the windows in the aircraft. He will be able to cruise far more efficiently at 72,000 feet than possible by jet engines. Add an electric booster stage and the flight range may improve by 20%-35%. This booster stage could be configured like the Falcon Heavy with two booster airplanes on each side of the passenger airplane. However, unlike rockets they need wings to glide back and land vertically.

I am looking forward to commercial supersonic VTOL electric aviation transcontinental sometime after 2030. The hard part of competing with kerosene jets is range and safety. It has to be extremely reliable like the kerosene jets are today.

@Henrik,
Please kindly do the math for the Boeing 777 and 787 when converted to LH2 to see how it would work. The Tu-155 is a very old and inefficient plane using very-low-bypass hence inefficient engines, with less-efficient aerodynamics.
Modern Boeing 777, 787, and Airbus A380 are far more efficient and consume far less energy per passenger-mile, hence making LH2 feasible.

The topic of this article is about electric small planes aka general aviation. In this regard, a LH2-FC propulsion system will prove to be far more efficient with regard to range and payload. An H2-FC powered quadcopter can fly 2-4 times longer than a battered-powered quad-copter, and ditto for H2-FC powered industrial forklifts, and the industry is gravitating toward H2-FC-powered large equipment for the same reason. Nikola Motor is choosing LH2-FC for propulsion of its electric semitruck, even though the truck also sport a humongous 320-kWh battery pack as power buffer.

Please regard battery as being analogous to RAM in a PC while H2 is the Hard Drive Memory that is much cheaper and can be packed in much large amount.

For commercial aviation, why not aim higher and work on Hypersonic planes, Powered by LH2 and ScramJet engine that can travel from NY to Tokyo in 2 hours? The LH2 will be circulating through the skin surface of the place to absorb heat before being burned off in the ScramJet engine. Everything else will be obsolete. For shorter range, there will be Fast Electric trains and Hyperloop.

Please kindly forget about Li-ion battery for aviation and kindly regard LH2 as the new fuel for the dawn of Renewable-Energy and Zero-Emission Aviation. The ultra-lightweight of LH2 is the biggest asset that any aerospace engineer would kill to obtain. Tremendous weight reduction will lead to unprecedented level of efficiency.

The LH2-FC can be regarded as a much, much lighter battery and much higher energy density than Li-ion can ever attain.

Many interesting considerations and prototype history on wiki.

Cryogenic LH2 would seem a good fit for aircraft as similar to rocket launch scenario the fuel will be consumed rapidly on takeoff.

If fuelcell is considered then auxillary battery; capacitor etc can be pre charged(plug in).

Being an alternative to traditional jet fuel, hydrogen has a higher energy density per unit mass but a lower energy density per unit volume, and containing the hydrogen at high pressure would require a heavy container. In aircraft heavy containers are not an option, and therefore regular carbon fibre tanks are often used, which can only sustain a pressure of about 350 bar. This is significantly lower compared to steel hydrogen containers (used in cars and ships) which can sustain 500 to 700 bar. This limitation decreases the amount of energy that can be spent on the propulsion by about half.[4] Alternatively, as with some rockets, cryogenic liquid hydrogen could be employed.

Another consideration would be fuel delivery to the airport. Maps show many airports, especially larger ones, have multiple underground pipelines servicing mind boggling demand.

I presume similar pipes will be an essential part of the mandated hydrogen economy scenario.

Over ocean supersonic may have a future - as a business class aircraft; but I think "normal" people can be persuaded to fly at M0.84 if they have enough films to watch.

Short-medium range hybrid electric has a future, and maybe battery club flying, if the capital cost is not too high.

@All
Here are some electric aircraft about to fly ...

The 350 w/m^2 solar cells look like a breakthrough, as long as they are affordable, but i would expect multijunction solar cells to be expensive.
Also, they are using 18650 batteries, so you could expect an improvement with the 2170 cells when they become available.

Ultra quick charging facilities (20/25 minutes or less) may still be a challenge but will soon be solved.

Hybrid e-planes with FC as range extenders may be a worthwhile alternative?