McLaren Automotive has launched a strategic project to design and develop technology for the next generation of powertrains. Working with a number of partners including BMW Group and Ricardo, the project intends to develop new combustion technology that will deliver a higher output per capacity than currently possible. It also aims to further facilitate CO2 reductions while simultaneously increasing engine output. The technology is destined for application in future McLaren engines.

The project, supported and part-funded by UK Government through the Advanced Propulsion Centre (APC), is intended to deliver improvements in thermal system efficiency using a modular combustion system, lightweight castings and composite materials. The project will also improve the UK’s development and production capabilities of low-CO2 internal combustion engine technology. The project will be led by McLaren Automotive but involves a total of six partners.

McLaren Automotive will work with its existing engine manufacturing partner, Ricardo, and BMW Group while Grainger and Worrall will deliver complex, lightweight casting technology. Lentus Composites will contribute knowledge in specialist composite structures. Completing the syndicate is the University of Bath who bring their advanced research and development capabilities in internal combustion engine systems efficiency.

This is an exciting project that plays to the strengths of all partners. McLaren Automotive has an exceptional reputation for building the world’s finest engines, as showcased by our M838T and its previous category wins in the International Engine of the Year awards. We will continue to independently design and build our own engines, and the benefits of this project will help us accelerate the development of our next generation of powertrain, as confirmed in our recently-announced Track22 business plan.

McLaren announced the six-year Track22 plan last March. At the heart of the plan is a commitment to its industry-leading 20-2% of turnover invested in R&D for future products and technology. Over the six-year Business Plan period, this represents an investment of £1 billion (US$1.25 billion) and will lead to the launch of 15 all-new cars or derivatives.

McLaren Automotive confirmed that at least 50% of its cars will feature hybrid technology by the end of the business plan period. Research engineers at the McLaren Technology Centre in Woking, England, are also in the early stages of the development of a fully-electric powertrain to evaluate its possible use in a future generation of an Ultimate Series car.

In March, McLaren will unveil a new supercar at the Geneva Motor Show. This second generation of the Super Series is McLaren Automotive’s first replacement of a product family and the first of the 15 new cars defined in the company’s Track22 Business Plan.

The new Super Series is created around an ultra-lightweight, carbon fiber central structure. Rigid, yet weighing less than the carbon fiber and metal cockpit architecture of the first-generation Super Series, the Monocage II contributes to a lightest dry weight of just 1,283kg for the new car—lower than the closest competitor and 18kg lighter than a McLaren 650S with comparable specification. 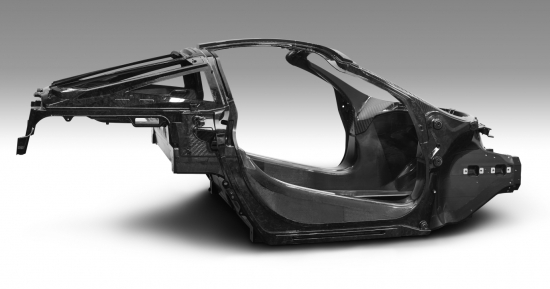 AGAIN, money from the taxpayers given to a private company that only build cars for the richs and corrupted that endorse these climate change policies, pathetic.