Toyota Motor Corporation has begun using two fuel cell forklifts, which have been manufactured by Toyota Industries Corporation, at its Motomachi Plant located in Toyota City. 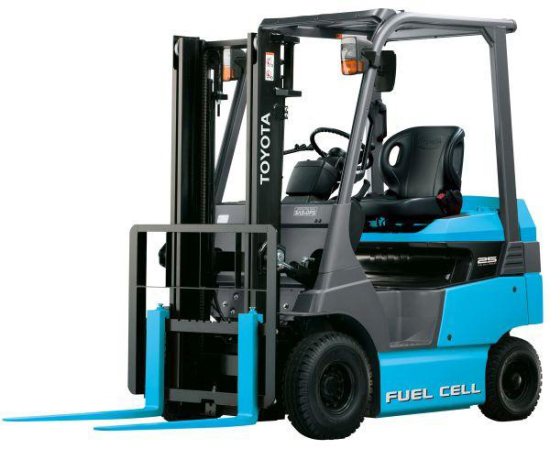 In addition to offering excellent environmental performance, fuel cell forklifts are also very convenient given that they can be refueled in approximately three minutes. Furthermore, with their ability to supply electricity, these fuel cell forklifts can serve as a source of power supply during emergencies.

In order to reduce CO2 emissions from its plants, Toyota intends to replace existing conventional forklifts with fuel cell forklifts. This will start with the Motomachi Plant, with two units being adopted in 2017, followed by about 20 units in 2018, and eventually, reaching the goal of 170 to 180 units by around 2020.

Since the announcement of its Toyota Environmental Challenge 2050 in 2015, Toyota has been developing and implementing technologies by harnessing hydrogen energy, which is aimed at utilizing hydrogen in its plants to realize its Plant Zero CO2 Emissions Challenge. Toyota is steadily working on such initiatives to reach this goal, including plans to push through with adopting and utilizing fuel cell forklifts in plants on top of the Motomachi Plant.

This time, Toyota is introducing these two fuel cell forklifts by tapping on a joint initiative by the Ministry of the Environment, as well as the Ministry of Land, Infrastructure, Transport and Tourism in an effort to promote the use of fuel cells in industrial vehicles in order to realize a hydrogen society.

More has to be done to multiply small (transportable) and large H2 stations.

This is one area where Fuel Cells make sense and are already being widely used. This will also build up the Toyota Fuel Cell manufacturing base and is directly applicable to other areas like FC Range Extenders or utility systems.
Warehouse operations are large energy users. Energy typically accounts for 15 percent of a non-refrigerated warehouse’s operating budget, but in refrigerated warehouses, refrigeration accounts for 60 percent of the electricity used.
Companies like Sysco Foods has converted many of their warehouses to Solar Energy and are already using H2 FC forklifts.
Warehouse Fork Lift use does not have to worry about infrastructure since refueling is done in-house. Also, warehouse operations are 24 x 7 and downtime to recharge batteries can be costly. Even the automated warehouse system that Amazon uses requires 5 minutes per hour to recharge.
Autonomous Forklift Automatic Guided Fuel Cell Powered Vehicles are not a future concept, they are an economic reality today. Except the current FC Forklift companies (PlugPower, Oorja, Nuvera, etc.) may not like the competition.

Fuel cells have been used in forklifts for quite a while.
Oorja has a direct methanol fuel cell for forklifts that reduces the fueling capital costs.