Cumulative worldwide sales of Toyota Motor Corporation hybrids reached 10.05 million units as of 31 January, scooting past the 10-million unit mark. Toyota said that this milestone demonstrates the staying power of a technology that is now emerging as a mainstream solution to reduce greenhouse gas emissions and other pollutants.

Toyota launched the Coaster Hybrid EV in August 1997 and the Prius—the world's first mass-produced hybrid passenger vehicle―in December of the same year. This latest milestone of 10 million units was achieved just nine months after total sales reached 9 million units at the end of April 2016. Although hybrid sales in Japan have stalled, and have dropped in North America, Europe and other regions have been the growth engine.

The Toyota Hybrid System (THS), which was incorporated in the first generation Prius, evolved into THS II in 2003, and was thereafter rolled out in a wide range of Toyota vehicles. The fourth-generation Prius, which became the first vehicle to be built on Toyota New Global Architecture (TNGA), was developed not only with environmental performance in mind, but also with outstanding driving performance for customers wanting to purchase a car that was fun to drive.

Toyota launched its first hybrid vehicle 20 years ago, and the circumstances surrounding environmentally friendly vehicles have since changed dramatically. The growing popularity of the Prius led to the creation of a new customer standard of choosing cars based on their environmental performance. As the number of companies developing and launching hybrid vehicles increased, so a new segment of “hybrid vehicles” was established. 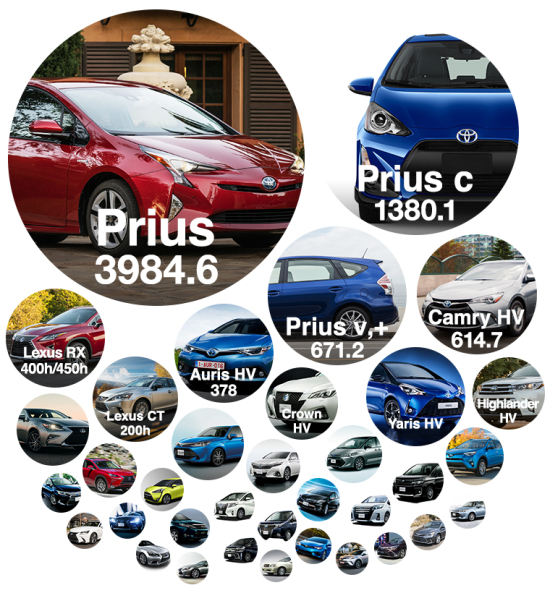 When we launched Prius, no one even knew what a hybrid was. Those who drove it were called geeks or other names. Today, thanks to those early adopters who gave Prius a chance, hybrids have grown in popularity, and have ridden a wave of success out of the unknown and into the mainstream. We are grateful to each and every one of our customers who has helped us achieve this important milestone of 10 million hybrid sales. We are committed to continue working hand-in-hand with them to tackle global environmental issues.

—Takeshi Uchiyamada, Chairman of the Board of Directors at Toyota and known as the father of the Prius

As of 31 January, Toyota estimated that the use of Toyota’s HV in lieu of conventional gasoline-powered vehicles of similar size and driving performance has resulted in approximately 77 million fewer tons of CO2 emissions and has saved approximately 29 million kiloliters (7.66 million gallons) of gasoline.

The data shows hybrids are at a dead end. There is zero growth in Japan since 2012. There is negative growth in USA since 2013. Only Europe and Others is growing but from a very low level. Plug-ins look to outsell hybrids in the US by 2018. Tesla’s Model 3 will make that happen.

The problem with hybrids is that with the emergence of BEVs they are no longer the greenest cars available. So people looking to do no environmental harm when they buy their next car will buy a BEV and not a hybrid if they can afford it. And everybody can afford BEVs once they get fully autonomous and are operated like taxis driving 100,000 miles per year.

All cars with electrification use common elements, and without the introduction of hybrids there would be no PHEVs.

There would also be no fuel cell vehicles which all have substantial batteries and are in fact hybrids, and they continue to patiently put in the building blocks for true zero emission transport.

In the end, Hybrid is just a gasoline car that consumes less gas and with prices of gas where they are, people are buying pick-ups and SUVs.

IMO, Toyota did a good job in Making Ever-better Cars, so buying a hybrid is not only question of fuel consumption, but a question of better car.

Europe is seeing a better sales figures because people are already used to buy better drive for more money. With diesel issues and prices, people in EU obviously like what Toyota has to offer.

There are a lot of people that won't just go out and buy EV if they don't have or don't want home charging Installation. EV market is big and has potential to grow, but it will face sales issues at some point, just like hybrids do now.

The way I see it BEVs are currently facing three issues: 1) high price, 2) short range, and 3) long charge time. All three issues will be solved with autonomous taxi/car sharing services by 2018 by Tesla and by 2021 by everyone else. After that BEVs will take over as fast as the auto companies can humanly possibly build the needed battery factories. We need about 100 Tesla sized battery factories costing as little as 500 billion USD in all to abandon all production of combustion engines. This is very doable. Definitely so in 15 years.

Toyota has done well making reliable cars but Tesla will do better with their BEVs. BEVs are much simpler and easier to make highly reliable and durable than gassers.

I remember when they sold less than 6 Prius per year in London.

We have three (3) excellent Toyota HEVs in the family and are very satisfied with their high quality and reliability. I agree, that after 20 years, HEVs will progressively be replaced by PHEVs FC/PHEVs, BEVs and FCEVs.

Personnally, I would purchase a Toyota PHEV as soon as our internal garages are equipped with charging facilities. As this may not happen for another 5+ years, an FCEV may become the prefered solution, as soon as more H2 stations are available.

@Harvey there is another option you have in a few years and before 2020. Buy two short range BEVs at 25,000 USD each with 120 miles range and a 30kwh battery. At that price they will not be fully self-driving so you need plugs in your parking lot. Then when you need to go longer with more stuff (like many suitcases) use the Tesla Network to hail a Tesla Model X or S to arrive at you front door within 5 min of hailing it. The Model S100 already has 335 miles range EPA and if you need to go longer nonstop there will be another fully charged Model S waiting for you after 300 miles of driving.

You will not see the cars with 130kwh in many BEVs. There will not be a big market for them when you have driverless cars that can take you anywhere for as long as you want without delay.

I think most people will probably buy one fully self-driving BEV that is short range like 120 miles and cost about 30,000 USD. For all additional driving needs they just hail a self-driving taxi at the Tesla Network or another automaker’s car hailing network.

You may be putting too much faith in early ADVs, specially in all weather conditions, including icy snowy streets etc. Many heavy city bus drivers lost control during recent icing rain conditions and crushed many ajacent cars.

City blue collar workers no longer want to get up at 4:00h to spray salt and adhesives. They delay till 9:00h when many accidents have already taken place. Part of their negotiation tactics?

Heated streets and sidewalks are expensive but may be one of the solution if you want to use ADVs year-round and get rid of a few thousand over-paid unionized blue collar workers?

I would think that all ICE cars will transition to hybrids much sooner than EVs cracking the 10% market share point.

Hybrids save a lot of gasoline and with regenerative braking, the brake pad people are going to get lonely. I don't know anyone who has changed brake pads on their Prius yet.

The addition of the electric motor and battery of the hybrid will become commonplace and people wont even think anything of it - that's my prediction.