MAN Truck & Bus, a member of the Volkswagen Group, and the Austrian Council for Sustainable Logistics (CNL) have signed a Memorandum of Understanding to enter into a development partnership on electric drive medium- and heavy-duty trucks. MAN also presented an all-electric prototype of a semitrailer tractor unit for urban distribution transport.

As part of its partnership with CNL—a group of fifteen of Austria’s largest companies in the retail, logistics and production sectors—MAN will be making test vehicles available to nine CNL member companies for practical trials from the end of 2017. Further, MAN intends to begin producing electric versions of the MAN TGM series—manufactured at its Steyr, Austria site—from the end of 2018. CNL plans to up its use of eTrucks for inner-city and suburban distribution transport from 2020 onwards in order to make an active contribution towards reducing emissions in cities.

MAN Truck & Bus already presented the MAN Metropolis concept vehicle in 2012. The all-electric 26-tonne refuse collector vehicle, with its very low noise levels, is suited for night-shift applications in city centers. A range extender in the chassis increases its deployable range to a maximum of 150 km/day.

Since then, numerous practical tests with the vehicle have provided valuable experience for future projects. The Metropolis received positive feedback from the testers for its simple operation and driveability. In practice, it proved to be a versatile vehicle suitable for many different applications. Fuel savings compared with a conventional diesel-powered vehicle were around 80% with the range extender.

MAN Truck & Bus presented a further development of the Metropolis concept at the IAA 2016. This time, it was a purely electrically powered semitrailer tractor for applications in night-shift deliveries to city center locations such as those normally utilized today by food supermarkets. Technically, it is based on a TGS 4X2 BLS-TS semitrailer tractor with an 18t permissible total weight. MAN initially used a driving demonstration to present the concept study as part of their presentation of the development partnership with CNL in Steyr.

Optimized for use with uniaxial or biaxial city semitrailers, the concept vehicle fulfills the main demands being placed on future delivery vehicles for city center applications—have a high load volume and low unladen weight, be emission-free (CO2, NOx) and very quiet in motion, and also guarantee good maneuverability.

The MAN City-Truck concept vehicle is powered by a 250 kW electric motor which delivers its 2700 N·m of torque to the rear axle via a propshaft, with no gearbox. Auxiliary units, such as the power steering, air compressor and the air-conditioning system, are electrically operated and controlled via the energy management system, thereby ensuring energy savings. 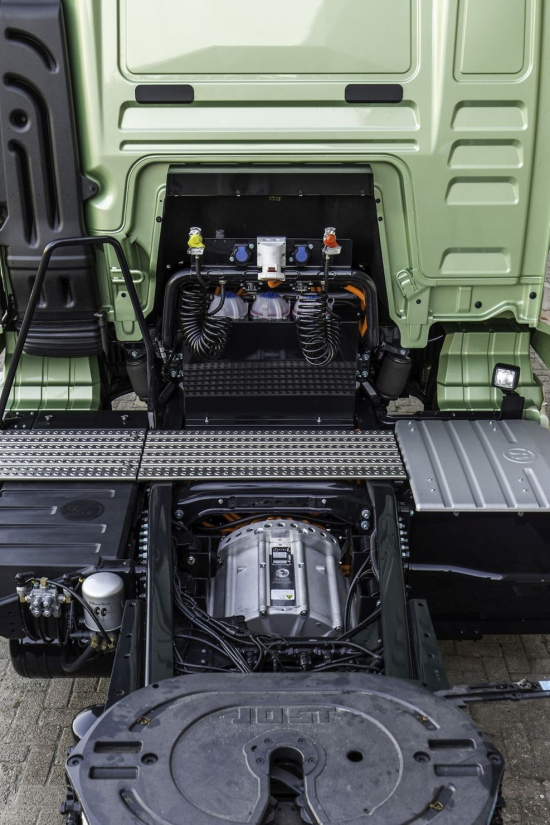 The braking energy recovery system converts the kinetic energy of the vehicle into electrical energy during acceleration phases, and feeds it back into the battery. A display in the cockpit informs the driver about the current battery charge level. The energy for the truck is provided by high-performance lithium-ion batteries from the Volkswagen Group, which are arranged under the driver’s cab above the front axle, where standard vehicles have their diesel engine.

The additional weight of the electric drive components is compensated for by dispensing with the conventional diesel engine, with the result that the vehicle has the same payload as a similar, conventional semitrailer tractor from the TGS model range.

The batteries are normally charged overnight. At the same time, the system is also designed for opportunity charging. The concept vehicle also has the technical infrastructure to allow additional batteries to be installed on the side of the frame. With maximum battery charge, and depending on how it is used, the semitrailer combination concept vehicle can travel up to 200 kilometers daily.

CNL practical tests as a step towards series introduction. The electric truck study, presented within the framework of the agreement with CNL, forms the basic technical design for the development of vehicles that will undergo practical tests in nine CNL partner companies from the end of 2017.

This will involve vehicles based on the MAN TGM series, primarily 6x2 chassis featuring refrigerated truck bodies, swap containers and drinks containers. A semitrailer combination also forms part of the scope of testing. The results from the practical tests with the test vehicles will help MAN to develop a series product portfolio of electrically driven trucks in future.

This represents just one aspect of the e-mobility strategy from MAN Truck & Bus for inner-city transport solutions, which are due to be part of the company’s product range as of 2021.

As part of its e-mobility roadmap, MAN is initially planning to unveil a pre-production bus version of a battery-electric vehicle (BEV) to the public by 2018. Series production of a 100% electrically powered city bus is due to start at the end of 2019. The technological know-how about the e-mobility assembly that has been gained in respect of buses will also be available for use in the eTruck.

When it comes to its e-mobility strategy, membership in the Volkswagen Group means that MAN is able to utilise synergies within the Group and profit from the dynamics of the passenger car sector.