In the US, Volkswagen’s updated 2017 e-Golf now carries an an EPA-estimated range of 125 miles—a 50% increase over the previous model year. EPA-estimated fuel economy is 126 MPGe city, 109 MPGe highway and 119 MPGe combined (28 kWh/100 miles), making it one of the most efficient electric vehicles on the market (tied with the Chevy Bolt, second after the Hyundai Ioniq Electric). The 2017 e-Golf goes on sale in the US later this spring, with pricing yet to be announced.

For 2017, Volkswagen equipped the e-Golf with a new lithium-ion battery with an increased energy capacity of 35.8 kWh, up from from 24.2 kWh. The 7.2 kW on-board charger is now standard on both SE and SEL Premium trims, which enables the battery to be charged in less than six hours at a 240V charging station. 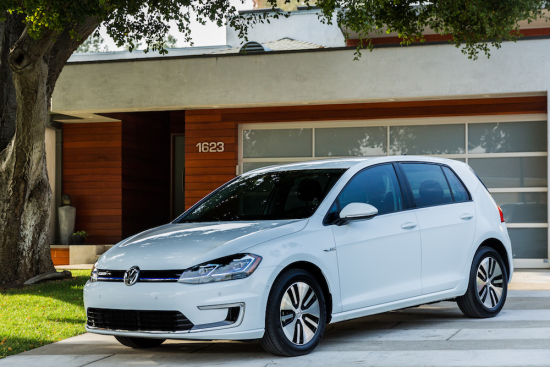 When equipped with DC Fast Charging (optional on SE, standard on SEL Premium), the battery can be charged to 80% within an hour at a 50 kW DC fast charging station.

Using 13 cents per kilowatt-hour, the EPA has estimated an annual fuel cost of just $550.

Based on the average greenhouse gas emissions from electricity production in the US, the 2017 e-Golf carries a full operational CO2 footprint of 170 grams per mile; for Southern California (LA-San Diego), this drops to 100 g/miles. The average new vehicle in the US carries a full operational CO2 burden of 430 g/mile. (Figures based on DOE’s GHG calculator for electric and plug-in hybrid vehicles.)

@Havey: It is pretty clear to me that the future market for automobiles is going to be differentiated in ways not seen before. There will be city cars, such as this, that serve most people's day-to-day needs, supplemented by rental/shared cars or public transit. There will be longer-range for those who drive more distances regularly (or who don't have plugs, or live in cold climates), probably HEV's. And there will be heavy duty all purpose vehicles which may include pickups and SUV's of some type. As public charging facilities become available, the mix may change. For now, I could use a city BEV, and keep my gasser for longer distances. Buyers will sort themselves out depending on the situation. The consumers will adjust their mindset according to circumstance.

Harvey it will come with a heat pump that cost extra but that will prevent poor MPGe during very cold weather. Also I would call the previous 80 mile range e-Golf very limited. This one has 125 miles during normal driving in normal weather this is limited rage not very limited. The Bolt with 238 miles rage is good range that will work for most people. BEVs don’t need as much range as gasser because you can plug them in every night if you have a plug in your garage. Gassers typically get 350 miles range but you don’t see people filling them up every night to be sure they got 350 miles range in their tank.

But VW still need to do a better job. They should make a brand only for BEVs with cars that are built to be BEVs and nothing else so they can be optimized for that without any compromises to accommodate a gasser engine in another version. Make them all driverless. Start selling them in volume like 300,000 per year by 2020 at the latest.

When Tesla Network launches to the public and enable minute by minute summons of driverless Tesla cars those 125 miles BEVs from the old automakers will start to sell well because people could buy them and hire a Tesla whenever they need more luggage and more range.

It appears there is a standard range developing around EVs of about 200 miles. That seems to give most people the flexibility they desire. and the headroom for lost range from aging.

I have thought that about 140 miles would do it in most cases. If they want to take a trip they can rent on weekends at reduced rates.

With global warming, the future winter weather is going to be a little warmer. I have a short range ev that does most of my driving and it works well in all conditions. The gas is used for long distance. With 200 mile battery banks coming down the road, there will be plenty of room for all your driving needs. With future charging stations stepping up, it will be almost as good as gas.

It all depends on whether you have access to another car. many families have two cars, and if one was an EV and the other not, the problem is solved.
Similarly, you might be able to to have a swap arrangement with a neighbor/relative, or some deal with the company who sold you the EV.

The range problems with electrified vehicles may be solved by 2025-2030 with:

All (most) current short range (100 miles or so) BEVs will have to be updated with 3X batteries to extend range to about 300 miles.