The boost strategy of the all-wheel drive Panamera comes from the 918 Spyder super sportscar. (Earlier post.) In the New European Driving Cycle, the average fuel consumption is 2.9 l/100 km (81 mpg US), and the new flagship Panamera can drive on fully electric power for up to 50 kilometers. Porsche says that the new Panamera Turbo S E-Hybrid underlines the high importance of electromobility to the company. 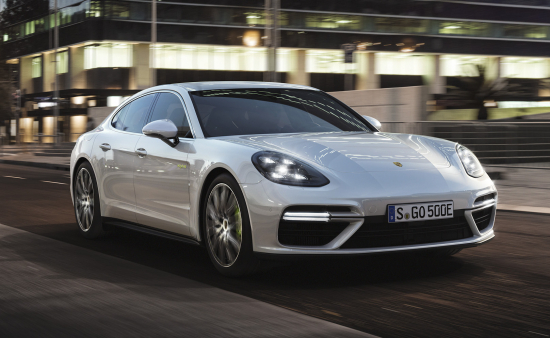 After the successful début of the Panamera 4 E-Hybrid, which uses a V6 engine together with an electric motor, at the 2016 Paris Motor Show (earlier post), Porsche is showing once again that hybrid technology has great performance potential. The new Panamera Turbo S E-Hybrid combines a 100 kW electric motor with a 404 kW (550 hp) V8 engine. The decoupler installed in the Porsche hybrid module is actuated electromechanically by an electric clutch actuator (ECA), just as in the Panamera 4 E-Hybrid.

The result is short response times and a high level of comfort. As in all other second-generation Panamera models, the fast-shifting Porsche Doppelkupplung (PDK) with eight gears is used to transmit the power to the standard adaptive all-wheel drive system Porsche Traction Management (PTM).

The Panamera Turbo S E-Hybrid comes with air suspension as standard and offers the comfort of a luxury sedan paired with sportscar-level performance values.

The electric motor is supplied with power via a 14.1 kWh liquid-cooled lithium-ion battery pack. The high-voltage battery integrated in the rear is fully charged with 10 A via a 230-V connection in six hours. If the Panamera uses the optional 7.2-kW on-board charger and a 230-V connection with 32 A instead of the standard 3.6-kW charger, the battery is fully charged in just 2.4 hours.

The charging process can also be started using a timer via Porsche Communication Management (PCM) or the Porsche Connect app (for smartphones and Apple Watch). Moreover, the Panamera Turbo S E-Hybrid is fitted with auxiliary air conditioning to cool or heat the passenger compartment even during charging.

The Panamera Turbo S E-Hybrid starts in the purely electric “E-Power” mode as standard, and the four-door sportscar drives locally over a distance of up to 50 kilometers with zero tailpipe emissions. When a specific pressure point is passed in the accelerator pedal, or when the battery charge level drops below a minimum value, the Panamera switches to “Hybrid Auto” mode, at which point the power of both engines is available. Consumption in the New European Driving Cycle (NEDC) for plug-in hybrid models amounts to 2.9 l/100 km for super-grade petrol (66 g/km of CO2) and 16.2 kWh/100 km for electric power.

The new flagship of the second Panamera generation will be launched in the European market in July 2017. Further markets will follow in the second half of 2017. The Panamera Turbo S E-Hybrid is celebrating its world première at the Geneva Motor Show. From the very beginning, the four-door Gran Turismo will also be offered in an Executive version, with a wheelbase extended by 150 millimeters.

That's nice. Now can you talk about green technology that matters when addressing climate change please?

Average fuel economy is 81 mpg? Really? My guess would be closer to 16 mpg considering how it will be driven.