EIA: US produced more petroleum than any other country in 2015

According to data from the US Department of Energy (DOE), gathered by the US Energy Information Administration (EIA), world petroleum production was 96 million barrels per day (mmbd) in 2015 and the United States produced more than any other country—16% of the global total.

In 1980, the United States was the second highest producer in the world with a 17% share of production, just behind the former Union of Soviet Socialist Republics (USSR) (19%). 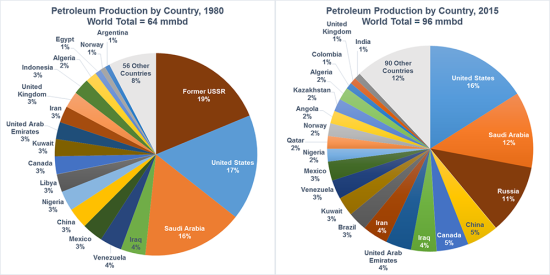 Total petroleum production includes crude oil and products of petroleum refining, natural gas liquids, biofuels, and liquids derived from other hydrocarbon sources (including coal to liquids and gas to liquids). Not included are liquefied natural gas (LNG) and liquid hydrogen.

While the events of 1980 were creating the circumstances of global petroleum exploration and production, Kennedy Miller Productions, then a small Australian film company, was finalizing script details on a sequel to their franchise movie and its associated star. The Road Warrior depicted a destitute post-apocalyptic world in which near-empty roads and starved remaining populations, bereft of fuels, battled scattered, ruthless criminal warlords for the remaining drops of petrol.

At that time, the world consumed 64Mbbl/day of 642Bbbl of proven reserves. Only 27 years left: long before 2007 we’d be wearing tattered clothing in the middle of the desert, battling guys with spiked leather collars for a hubcap full of fuel scavenged from a horrendous wreck. Sharing scraps of dog food with our faithful Cattle Dog, we’d hope not to be the guy who tries to catch the razor-edged boomerang.

Anyhow it’s 2017, we’ve used up 1980s proven reserves more than twice over, we’re consuming 94Mbbl day, proved reserves stand at about 1.6Bbbl, and technologies to reduce fuel per psgr-mi(km) gets better every day. And US production has gone from ~10 to around 15Mbbl/day.

I had a really cool studded leather bracelet that I wore to a Clash concert and to Metallica’s early shows in the Battery in ’82, but long since relegated it to a box for silly discarded things as I have done with endless Oilpocalypse tales.

We never got a Cattle Dog but I adopted a Pound Hound brindle pit bull mix that looks pretty scary in her scruffy, scarred and muscular fashion, and sometimes she rides with me in the Volt while we seek out gangs of pillaging fuel thieves. Mostly we end up at the dog park, where she shows fine manners romping amongst the defenseless retrievers who would have died guarding the last liters of precious fuel.

Herman, I was really worried about peak oil between 2006 and 2010. Now I only worry about global warming. There are more than enough fossil fuels to triple or quadruple our current atmospheric CO2 concentration.I suspect the price of oil will drop in the 2020's as fuel efficiencies continuously improve. Hopefully petroleum will go the way of whale oil as its uses are replaced with better technology.

Whale oil was only replaced when there was a cheaper alternative, namely, fossil oil. The same needs to happen for fossil oil to be replaced. The cheaper alternative will be on demand ride-hailing driverless BEVs. They cost more than gassers up front but that is more than made up for in lower cost for electricity and maintenance and better durability. Plus the ride-hailing customers do not see the higher upfront cost they only see the cost per mile price so this is no longer as issue either. I am 100% certain of that.

The free world should not import oil or gas from countries that does not support democracy, individual freedom and science as the foundation for knowledge. We might end up in war with them and that makes importing energy a liability. We are not safe as long as we import oil from these countries. Therefore, I am glad to see that the US shale oil and gas shale are now booming again but this time at the low price of 50-55 USD per barrel and 3 USD per MMBtu. This has been made possible because of incredibly fast productivity increases in horizontal drilling methods (aka fracking). The US oil and gas fracking industry is now at a cost of only 40 USD per barrel for most new drilling and it is still going down. Gas is plentiful for a hundred years and US oil shale should be plentiful enough to gain oil independence in 3 to 4 years and start exporting to allies after that. After that numerous of Tesla sized giga factories will start to function as the new “virtual oil fields” that will keep the free world independent of oil imports from our cultural adversaries.

Fracked fields don't last as long, they have to reopen them then drill more. The numbers may look good now but perhaps not in 10 years.