With the Volvo Concept Truck, Volvo Trucks has developed its first hybrid vehicle designed for long-haul applications. In combination with the vehicle’s other improvements, the total reduction in fuel consumption and CO2 is around 30%. (Earlier post.)

Volvo Trucks estimates that in long haul operation, the hybrid powertrain will allow the combustion engine to be shut off for up to 30% of the driving time. This will save between 5-10% in fuel, depending on the vehicle type or specification, and its drive cycle. It also offers the ability to drive in full electric mode for up to 10 kilometers, enabling the vehicle to operate with zero emissions and low noise. 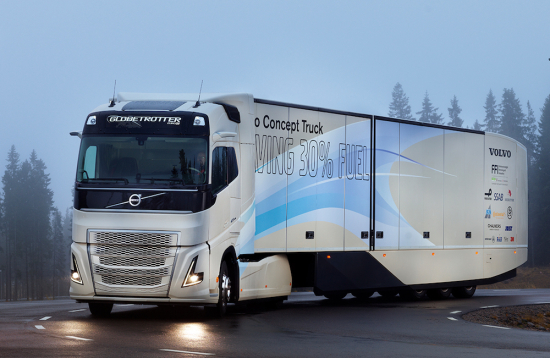 Volvo Trucks first unveiled the Volvo Concept Truck in May 2016, and has now developed and enhanced the vehicle even further. In addition to the improvements in aerodynamics, rolling resistance and reduced weight, the new version also features a hybrid powertrain—one of the first of its kind for heavy-duty trucks in long haul applications.

We strive to be at the forefront of electromobility and to constantly push the limits when it comes to reducing fuel consumption and emissions. Over the coming years, as society moves more and more towards renewable energy, we strongly believe that electromobility and hybrid technology will become increasingly important. The powertrain in our concept truck has been developed to improve transport efficiency and thereby help the industry towards sustainable transport. With the concept truck we will gain valuable knowledge and experience, which will help us develop the technology further.

The hybrid powertrain works by recovering energy when driving downhill on slopes steeper than one per cent, or when braking. The recovered energy is stored in the vehicle’s batteries and used to power the truck in electric mode on flat roads or low gradients.

An enhanced version of Volvo Trucks’ driver support system I-See has been developed specially for the hybrid powertrain, which analyses upcoming topography to calculate the most economical and efficient choice between the diesel engine (Volvo D13 Euro 6 Step C) and the electric motor, as well as the optimal time to use the recovered energy.

The Volvo Concept Truck also builds on many of the gains achieved by its predecessor, namely improved aerodynamics, rolling resistance and reduced vehicle weight.

This is a platform for verifying several new technologies for increasing transport efficiency. Some of these developments have already been introduced to our trucks, and some will be introduced in the near future. The hybrid powertrain is partly based on knowledge and experience from Volvo Buses’ hybrid and electric buses.

The Volvo Concept Truck is the result of the Swedish part of a bilateral research project involving both the Swedish energy authority Energimyndigheten and the US Department of Energy.

An American Concept Truck, the SuperTruck project, was developed as part of the US Department of Energy's SuperTruck program, which promotes research and development to improve transport efficiency for long-haul operations in North America.

My only disappointment is that it is still a concept.
As with every new and improved offering the expected higher front loaded costs would be a hindrance to otherwise rational economics.
Larger reputable and or financially independant companies would have bigger incentives than the many operators that seem to be marginally viable as we've seen when defeat devices are fitted to avoid the cost of ad-blue and the extra fuel needed for it's operation.

It should be expected that beyond the 5-10% fuel savings from hybridising, there will be many savings.

From the earlier posts it is hard to quantify total savings from a specific version as the question usually comes back to compared to what.

Hybrid tends to work better in stop and go city unless it can run series on the highway. I mentioned that the Volt could do this but the response from a poster was "that's not how it works"...but it should.

For long haul, it is all about the hills. This would help in the Alps, not so much in Nebraska.

Series hybrid could work on Great Plains highways, the idea is to have the power source run in its most efficient mode with batteries as the buffer and motors as the efficient propulsion.

In the case of heat engines like internal combustion they run more efficiently with heavy loads, that would be charging the battery banks at full output.