Over the course of an eight-month endurance test, the Germany-based high-performance battery system provider AKASOL subjected its latest generation of Li-ion battery modules—AKAMODULE 46Ah and 53Ah—to a range of extreme conditions. Among that results was that, due to the module’s liquid-cooled design (developed in-house) and extremely homogeneous conditions for the battery cells, the service life of the batteries can be extended by up to 50% when compared to the manufacturer’s specifications.

Even after over 8,000 full load cycles for the 46Ah and 3,000 full load cycles for the 53Ah, the modules were able to retain around 80 percent of their original capacity. They were even able to continue to run on a residual capacity of 30 percent, thereby enabling a total of 15,000 cycles to be completed. The uniform deterioration of the individual cells is another satisfying result, as this significantly reduces the loss of capacity in the assembly. This means that the end of the battery’s service life is delayed until much later on.

In a test environment set up in-house, the AKASOL engineers subjected their 46Ah and 53Ah battery modules to extreme conditions. At temperatures of 50 to 55 degrees Celsius, the battery components worked for 1.5 years in full cycles at a constant load of 100A. The measured values in terms of capacities, differences in cell voltage and internal resistances confirmed the prognoses of the battery experts. In some areas, their expectations were even exceeded. 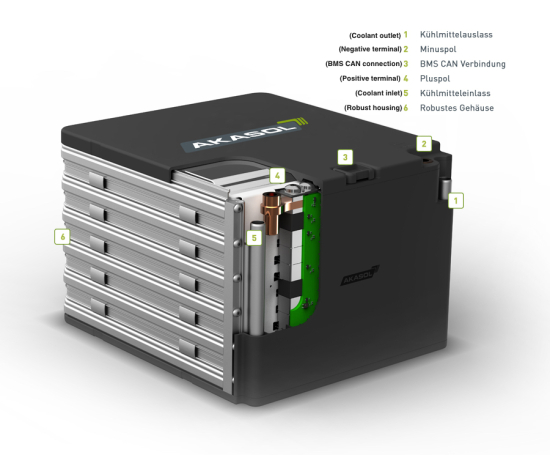 The AKAMODULE 46Ah and 53Ah models go far beyond the service life specified by the manufacturer of the battery cells, exceeding them by up to 50 percent. This is due to the liquid-cooled module developed in-house and the homogeneous integration of the cells. In a typical application, such as a fully electric city bus, the battery would still be in service after it reaches the million-kilometer mark.

As disparities in the production of the cells and various operating conditions lead, in practice, to the cell charges within a particular energy storage unit becoming uneven, the battery management system must be able to bring the individual cells to the same charge level. In a multicell battery, this act of balancing enables the capacity of the entire system to be utilized on a long-term basis.

Our 46Ah battery module only had to be rebalanced once during the entire test period, which consisted of 8,000 full load cycles. Usually, battery management systems have to perform the same balance control over ten times more often to ensure that the cells deteriorate evenly and guarantee that full capacity continues to be available.

Despite the extremely high functional integration on a modular level, the AKAMODULE achieves energy density of more than 140 Wh/kg. This enables long vehicle range with simultaneously exceptional durability.

Every AKAMODULE is cooled with a water-glycol fluid mix. The production of modules with integrated liquid cooling was previously considered to be very complex. AKASOL has discovered a manufacturing method to simplify this. The result is a significant reduction in volume.

This could be an ideal long lasting battery for heavy vehicles if/when energy capacity/density is 2X or 3X, if possible?

Tesla is on track to have more than 80% capacity after 100,000 miles due to their thermal management.

This example agrees with a university study some 5 years ago that described tests on a used car battery pack.

I don't recall the make or the exact figures but from memory it was ~ 3yo and had recorded 40/60k klm of service. The pack measured ~60/70% retained capacity. During the cycling test charging by a generic optimised charger the pack was at ~ 85 + % by the end of the 10year equivalent 100,000+ klms cycles.

The point is that while new chemistries and manufacturing process will likely improve resilience by say 100%, the charging and cell maintenance strategy will have the greater affect on a battery's life expectancy.

The 50% performance improvement shows the importance of appropriate management and an important area for research and development.

Harvey and I would like modular, start with 24 kWh and add 4-6 kWH in increments. People pay for the range they need.

A BEV with 3 or 4 extra modules could become an extended range unit.

Standardized plug-in modules could be rented on an as required basis.