At the Geneva Motor Show, INFINITI is unveiling the Project Black S concept, exploring the potential for a new INFINITI performance grade, featuring on-road technology inspired by Formula One. Suggesting a radical reinterpretation of the INFINITI Q60 coupe, the Project Black S features an aerodynamically-optimized new design with a performance hybrid powertrain developed in close collaboration with the Renault Sport Formula One Team.

The performance hybrid powertrain being explored through Project Black S features an energy recovery system (ERS) to harvest energy, deploying recovered electric power to boost power and torque. The ERS could contribute to a 25% increase in power for INFINITI’s new 3.0-liter V6 twin-turbo engine; the result is instant, significant, lag-free acceleration. Inspired by the dual-hybrid system proven in Formula One, the technology does not yet exist in a current road car. 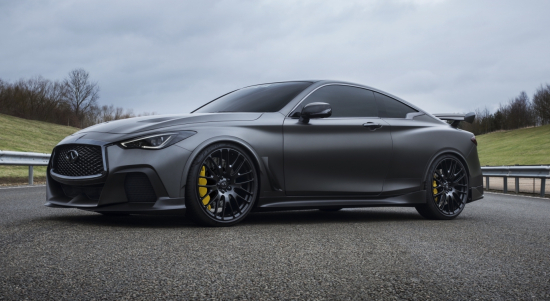 INFINITI is leading the way with innovative new powertrain technology for consumers, such as the award-winning 3.0-liter twin-turbo V6 engine, and VC-Turbo, the world’s first production-ready variable compression ratio engine. With Project Black S, we are looking at how a unique performance hybrid energy recovery system could be adapted from Formula One for use on the road.

A new ‘Black S’ grade, showcased by the new concept, could represent the maximum level of performance and dynamic capability offered by INFINITI. The company believes there is potential for a ‘Black S’ grade that offers progressive levels of product enhancement—including higher power and torque from innovative powertrains, new or uprated suspension systems, and unique design elements.

After five years as a sponsor in Formula One, INFINITI made the move to become a technical partner in 2016. Drawing on the expertise gained developing hybrid technologies during this time, the company has supported the Renault Sport Formula One Team’s development of a dual-hybrid powertrain with an ERS, contributing knowledge in hybrid technology and additional engineering resources.

This technical collaboration has enabled INFINITI to explore the potential for a road-going Formula One-inspired ERS system—a first for a production vehicle. With its multiple links to motorsport, Project Black S would be the Renault-Nissan Alliance’s first consumer-facing Formula One-inspired car. INFINITI has also called upon the team’s high level of expertise in advanced composite materials to create the carbon fiber bodywork elements of the Project Black S.

Project Black S suggests how higher power and torque output could be deployed by fusing the performance hybrid technology with the award-winning 3.0-liter V6 twin-turbo engine, the most advanced V6 engine INFINITI has ever offered. The ERS could contribute to greater performance.

In its Formula One application, the technology employs two types of motor generator units (MGUs) and a battery pack to gather, store and recycle electrical energy. The Renault Sport Formula One ERS system features an MGU-K unit to harvest kinetic energy from braking, and an MGU-H unit—fitted to the turbocharger—to harvest heat energy from exhaust gases. (Earlier post.)

The energy harvested by each of the MGUs is stored in high-rate discharge lithium-ion batteries, with the recovered electric power deployed to rotate the crankshaft and turbocharger turbine blades more quickly.

Project Black S explores how MGU technology, paired with high-rate discharge batteries, could be adapted for road use. A production car with Formula One-inspired performance hybrid technology would benefit from greater power and torque, and instant, lag-free acceleration. INFINITI powertrain engineers have calculated that a performance hybrid ERS could contribute to an approximate 25% improvement in maximum power output.

INFINITI believes the Q60 sports coupe could provide the ideal platform for a performance hybrid powertrain, and the concept vehicle revealed in Geneva features a range of further modifications to realize maximum performance. These include a new high-performance titanium twin exhaust system, maximizing the efficiency of air flow through the powertrain.

Project Black S also suggests how lightweight 21-inch wheels and wider performance tires could be deployed for greater traction, while hinting at a weight reduction program to fully offset the additional weight of the performance hybrid system. A ‘Black S’ production car could also benefit from further tuning and modifications to the chassis and suspension.

Design. Project Black S hints at a more aggressive, performance-enhanced offering from INFINITI. Design work has been led by INFINITI’s London studio in Paddington, under the management of the INFINITI Global Design Center in Japan. The INFINITI Design London team has created an interpretation of the Q60 sports coupe with Formula One-inspired, performance hybrid power in mind.

The concept vehicle is finished in matte grey and black. Gloss black trim replaces the chrome found on the standard car, which surrounds the double-arch grille and lines the crescent-cut C-pillar.

Alluding to the performance potential of a ‘Black S’ model, the use of carbon fiber has allowed INFINITI to sculpt thin, blade-like design forms that would not be possible with traditional materials, such as metal or fiberglass. While the Q60’s organic and artistic design aesthetic remains, the use of carbon fiber has added a more technical element. Not only is the composite more adaptable; it is also incredibly strong, and carbon fiber components could be used to balance aerodynamic efficiency with high downforce.

Large front splitter, rear diffuser, fenders and side skirts are all constructed out of carbon fiber to minimize weight and enhance downforce, while ultra-thin aero ‘blades’ in the side sills ahead of the rear wheels channel air around the lower body of the car. A large fixed rear wing—also made of carbon fiber—stands proud of the trunk lid, increasing downforce at speed.

Deep body stamping from the Q60’s manufacturing process allows the Project Black S to retain the sports coupe’s deep creases and flowing lines. For the concept, INFINITI designers have wrought a series of changes to create a more aggressive design execution.

Enlarged air intakes at the front of the car are more effective at channeling cooling air into the engine bay and brakes, and new hood vents help evacuate heat. At the rear, the body is shaped to allow circulating air to escape as quickly and efficiently as possible, aided by vertical aero foils and the large rear wing for maximum downforce and high-speed stability.

Forged 21-inch aluminum alloy wheels – highlighted by wheel arch extensions – are larger, wider and lighter than those on the standard Q60, adding to the performance image of the concept while also reducing unsprung mass and rotational inertia at each corner.