At the Geneva Motor Show, Daimler unveiled the Mercedes-AMG GT Concept as a preview of its third completely autonomously developed sports car, which also extends the AMG GT family to include a four-door variant. The AMG GT Concept is powered by a V8 biturbo gasoline engine and a high-performance electric motor and modular battery concept.

This performance hybrid powertrain generates a system output of up to 600 kW (805 hp). It covers the sprint from 0-100 km/h in less than three seconds. After the Formula 1 vehicle, the show car is the second AMG model to bear the new designation “EQ Power+”, which all performance hybrids from Mercedes-AMG will be given in future. 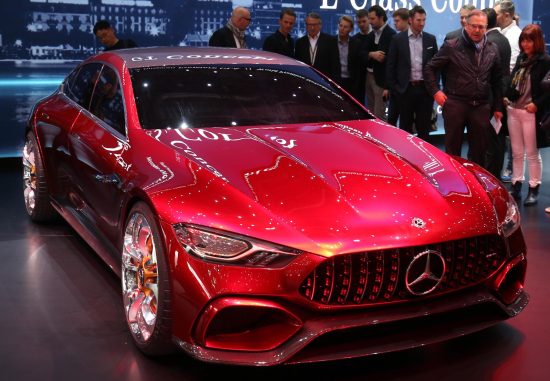 The fully variable AMG performance 4MATIC+ all-wheel drive is also supported by the electric motor. It drives the rear wheels directly and has the effect of an additional booster. Torque Vectoring allows each wheel to have individually allocated torque.

The energy storage unit is more powerful than conventional hybrid batteries, but at the same time more compact and lighter. On a modular basis the system is scalable upwards, so that the performance and capacity of the battery can be adjusted to meet specific requirements of customers or certain markets.

The charging of the battery during the journey occurs on the one hand via brake recuperation, but on the other hand also with the aid of the combustion engine if the battery charge has dropped beneath a certain threshold value.

The operating strategy of the AMG GT Concept is derived from the hybrid powerpack of the Mercedes-AMG Petronas Formula 1 racing car. As in the champions league of motorsport, the battery is also charged while the vehicle is being driven so as always to have the full amount of electrical power available—and, for example, to be able to accelerate out of bends in a flash with full thrust.

Three operating modes can be preselected via the electric drive unit: the AMG GT Concept either drives purely electrically or only with the combustion engine or it optimally combines both drive sources with one another as a hybrid.

The operating strategy, the definition of the drive programs and fundamental hybrid components are exclusive AMG developments.