Compared with a model equipped with a regular TFSI six-cylinder engine without the mHEV system, the Q8 sport concept with its 20 kW greater performance consumes around one liter less fuel per 100 km —corresponding to a reduction in CO2 emissions of 25 g/km (40.2 g/mi). 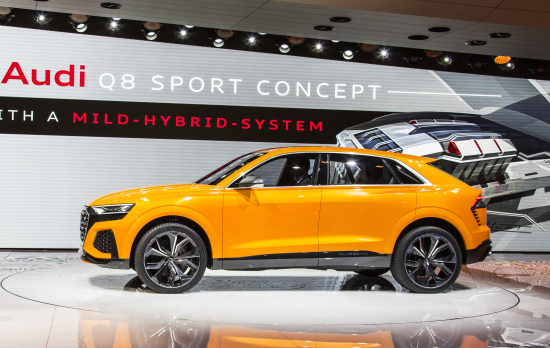 The drive system of the Audi Q8 sport concept is a major step towards optimizing efficiency and sustainability in large-volume series production. The combination of mild hybrid technology and a TFSI engine sets a new benchmark for the synthesis of electromobility and combustion engines. In the future, this combination will be used in many Audi models.

—Rupert Stadler, Chairman of the Audi AG Board of Management 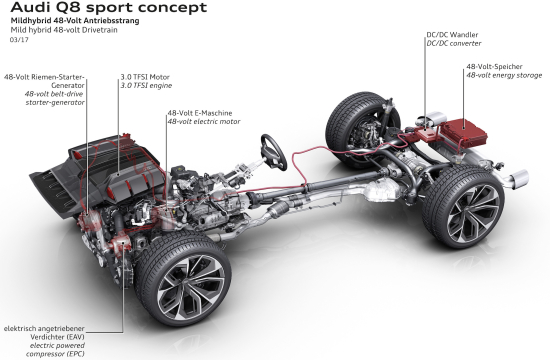 The starter generator positioned between the crankshaft and the transmission handles recuperation and, if required, can work in the opposite direction as an additional electric motor. The 48-volt electrical system assures the supply of electrical power.

For the customer, this approach has a number of advantages: the energy recovered as part of recuperation can, if required, be used to increase performance. During boost operation—in which the combustion engine and electric motor are used simultaneously—the electric motor’s additional 20 kW of output and its torque of 170 N·m (125.4 lb-ft) open up a total of 350 kW of power to the engine and bring its total torque up to 700 N·m. The result is sporty acceleration from any speed and rev range.

Positioned at the rear under the luggage compartment, the lithium‑ion battery with an energy storage capacity of 0.9 kWh makes it possible to keep moving slowly in stop-start traffic with the combustion engine switched off, as well as allowing for maneuvering and parking under electric power alone. During braking, efficient recuperation using the 20-kW-strong starter generator quickly recharges the battery to ensure that the vehicle can regularly be driven under electric power.

In addition to the two exhaust gas turbochargers, the electric compressor provides the Q8 sport concept with an additional kick by supplying the three-liter six-cylinder engine with fresh air. The electric powered compressor supports the turbochargers at times when the exhaust gas is insufficient for rapid development of power. It therefore opens up delay-free acceleration to the V6 gasoline engine—something previously only known to diesel engines and electric motors. The electric compressor is already successfully applied in the series-production Audi SQ7.

The electric compressor is positioned in a bypass downstream of the intercooler—i.e. close to the engine. Instead of the turbine wheel, it integrates a compact electric motor which accelerates the engine’s compressor wheel up to 70,000 rpm in less than 250 milliseconds. With the support of the electric compressor, the power of the 3.0 TFSI is always spontaneously available as soon as the accelerator is depressed, even at low engine speeds.

When driving off, the SUV immediately takes a lead of several meters ahead of the competition. During comfort-oriented driving, the electric powered compressor technology prevents unnecessary downshifts and thus keeps the engine speed at a low level. Meanwhile, sporty drivers will appreciate the supreme and spontaneous delivery of power when exiting curves.

When driving, the drive system management controls the operating states of the Audi both intelligently and flexibly: the luxury SUV can boost, coast and recuperate as appropriate for the situation. The predictive efficiency assistant is a standard feature which supports the driver by supplying greatly detailed information on the vehicle surroundings to the control unit. Route data from the navigation system and Car-to-X services from Audi connect are also taken into account.

Controls and displays. Information and commands are passed primarily through touch displays augmented by the Audi virtual cockpit future and a contact-analog head-up display. All displays feature a new “digital design” that concentrates systematically on only the most important things.

The contact-analogue head-up display projects important displays onto the windshield in the driver’s direct field of view, seemingly placing them in the real environment. A navigation arrow, for example, appears in the same position as an actual arrow on the road—an intelligent application of augmented reality. The notifications from the driver assistance systems also merge the virtual and physical worlds.

The Audi virtual cockpit future is even more dynamic thanks to new functions and, with a resolution of 1,920 x 720 pixels, it displays graphics with more detail than ever before. In “auto” display mode, the 12.3-inch TFT display offers generous space for maps, lists and additional information. The top-down map view visualizes the selected route. When zooming in, the current position and surroundings are displayed in 3D. Through the buttons on the steering wheel, the driver can switch to “performance” mode. The needles of the speedometer and powermeter now appear in a three-dimensional perspective display.

All other screens in the Audi Q8 sport concept are touch displays. The great strength of this principle is the direct, fast and intuitive operation. Drivers select each function exactly where they see it. By implementing touchscreens, Audi was also able to further reduce the number of buttons, switches and levers. The interior now appears even neater and more streamlined.

The MMI display in center of the dashboard is used to control the infotainment system and vehicle settings. A display for the climate control system is integrated into the diagonally sloping section of the center console. While using this display, the driver’s wrist can be rested comfortably on the low selector lever of the eight-speed tiptronic. If the sensors in the seat detect a front-seat passenger, the touchscreen shows their climate control settings. If the driver is alone, this function is deactivated. Another smaller touchscreen to the left of the steering wheel is reserved for the lighting functions.

If the mild hybrid can reduce the gms/km by 25, and if this pans out across the whole VW+AUdi range, this would be quite something.
Like the beginning of the end of consumer diesel.

Well, mahonj, you can use a mild hybrid on a diesel engine as well. It is not forbidden by law. So, that might be the beginning; not the end.

If people were able to keep their diesels off in city traffic, that would be good - but a mild hybrid won;t be enough to do this. You would need a full hybrid, which would be too expensive [IMO].