The FE Fuel Cell Concept continues Hyundai Motor’s commitment to fuel cell vehicle development and is part of the company’s eco-vehicle program that will see 14 or more new environmentally-focused models introduced by 2020. Spurred on by greater global demand for fuel-efficient, eco-friendly vehicles, the program continues the example of innovation set by IONIQ, the first car to offer a choice of three electrified powertrains in a single body type. 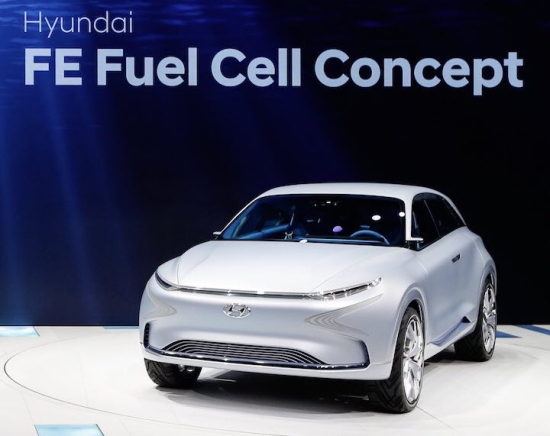 The concept’s name “FE” stands for Future Eco, reflecting the innovative new technologies that complement the car’s eco-friendliness. A notable characteristic of the new concept is its internal air humidifier, which recycles water emitted by the car’s clean hydrogen energy circulation to create a more comfortable cabin environment.

The FE Concept showcases Hyundai Motor’s fourth-generation of hydrogen fuel cell technology, an evolution of research, development and real-world evaluation programs around the world. When compared with the current generation system used in the Tucson ix35 Fuel Cell, the new technology is 20% lighter, and achieves 10% greater efficiency. In addition, the power density of the fuel cell stack is increased by 30%, boosting the car’s range significantly. 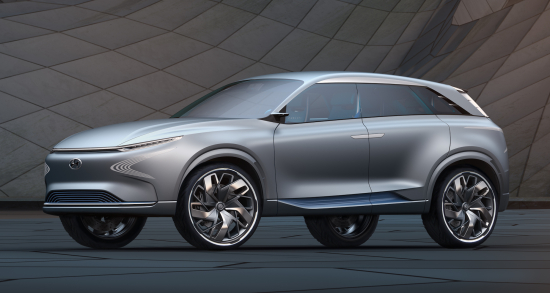 As another reinforcement of the car’s eco-credentials and focus on customer convenience, the FE Concept features portable battery packs—charged by the car’s energy output—to power passenger devices. Meanwhile, the trunk features an integrated storage and charging space for an electric scooter, demonstrating how Hyundai Motor is developing mobility solutions to match future lifestyles.

The car is designed to run for more than 800 kilometers (497 miles) between refueling, acknowledging the current limited hydrogen infrastructure. Elements of the FE Fuel Cell Concept will influence an SUV Fuel Cell model set for launch in 2018, which will feature advanced Hyundai Smart Sense driver assistance technologies, alongside an extensive hydrogen-powered range. 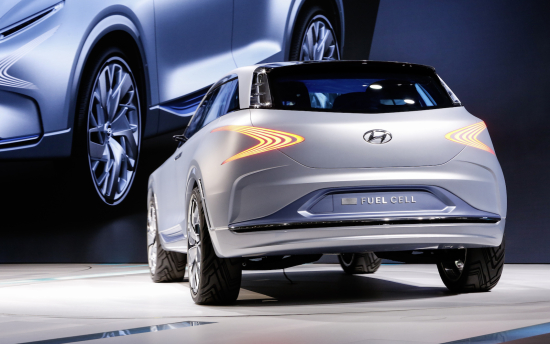 Hyundai Motor has a heritage of building innovative, fuel-efficient vehicles and aims to become a global leader in sustainable mobility through its leadership in hydrogen fuel-cell technology. We want to realize our dream of a Hydrogen Energy Society and call upon stakeholders from various sectors, not just carmakers, to combine their efforts to ensure that hydrogen production, delivery and infrastructure are aligned.

In early 2017 at the Davos World Economic Forum, Hyundai Motor Company joined the launch of the Hydrogen Council, a global initiative to promote the development and commercialization of fuel cell cars as an alternative to fossil fuel vehicles. This follows two decades at the forefront of hydrogen vehicle development, most recently with the ix35 Fuel Cell (Tucson Fuel Cell in some markets), which in 2013 became the world’s first mass-produced hydrogen-powered vehicle, and is currently on sale in 17 countries around the world.

which in 2013 became the world’s first mass-produced hydrogen-powered vehicle, and is currently on sale in 17 countries around the world .... selling about 10 per year in each country. WOW!

I personally would not get in a car with a 10,000 psi hydrogen tank. Now if they reform bio methanol on the car, I am there.

It is a common misconception that 10,000 psi LH2 (and LNG) tanks are even practical for consumer applications.
Hydrogen liquefied at that pressure must be cryogenically cooled or alternatively the ullage allowed to vent as outside heat is absorbed.

This means at temperatures we associate with earth systems - say + - 50 o C the tank (no matter the degree of insulation) must vent.

Not a problem if the H2 is consumed directly the vented gas can be used immediately or possibly allowed to transfer from the thermally insulated tank to a gas tank at high volume low pressure.

There are of course a number of suggested reversible absorbent materials investigated and described but currently there are none that could be described as ready for mass production.

There are some nanostructured particles showing promise with regard to capacity and reversibility at high density ratios but again I would suggest that for mass market large quantities need to be cheaply produced.

Up to 800 Km between refills may be more than enough. Pressure could be reduced by 25% or so by reducing range proportionally.

Until I see some real safety numbers from many cars over many years, no thanks.