Lexus unveiled the 2018 Lexus LS 500h, the full hybrid version of its new flagship sedan, in Geneva. The model follows on the world premiere of the twin-turbo gas V6-powered LS 500 at the 2017 North American International Auto Show (NAIAS) in Detroit in January.

The LS 500h is equipped with the new Lexus Multi Stage Hybrid System, which provides enhanced responsiveness and linear acceleration, particularly when accelerating from a full stop. (Earlier post.) (Toyota Motor engineers are presenting five papers on the MSHS at the upcoming SAE WCX 17 next month in Detroit.) The powertrain features a normally aspirated V6 3.5-liter engine with the new Multi Stage Hybrid System (MSHS). The MSHS is set up in such a way that it simulates a 10-speed AT. 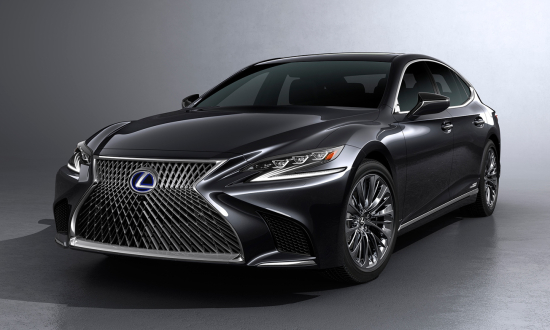 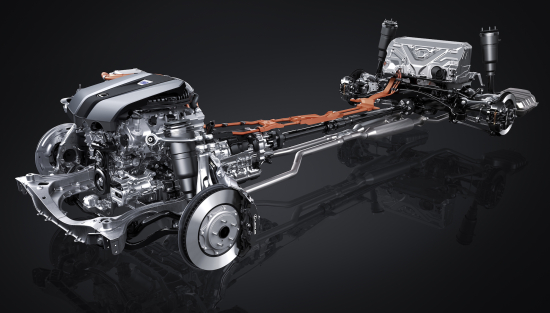 The LS 500’s 10-speed automatic transmission, first seen in the Lexus LC 500 luxury coupe, is a torque converter automatic, yet with shift times that rival those of dual-clutch transmissions. The wide bandwidth afforded by its closely spaced ratios is ideal for all forms of driving, helping provide an optimal gear for all conditions.

The driver can execute shifts using paddle controls, but many will prefer to use the advanced electronic control system, which anticipates the driver’s input and chooses the ideal ratio by monitoring acceleration, braking and lateral G-forces.

When accelerating from standstill, the close ratios of the low gears and the shortened shift time generate a rhythmical and exhilarating feel as the car gains speed. The twin-turbo engine’s high torque matches ideally with the higher gear ratios for effortless, relaxed motorway cruising, while very quick downshifts provide direct acceleration with no lag in G response.

The Multi Stage Hybrid System enriches the hybrid powertrain performance experience and is also seen on the all-new LC 500h. (Earlier post.) The system adds a four-stage shifting device to the Lexus Hybrid Drive combination of a 3.5-liter V6 gas engine and two electric motors. The result is more direct response to driver inputs while maintaining the characteristic smoothness and efficiency for which Lexus hybrids are renowned.

In a conventional full hybrid vehicle, engine output is boosted by the electric motor via a reduction gear, but with the new Multi Stage Hybrid System the power from the V6 engine and the hybrid battery can be amplified by the four-stage shifting device, allowing much greater drive power to be generated when accelerating from stationary and achieving a 0-60 time of 5.4 seconds.

The design of the system places the multi-stage shift unit immediately behind the power split device, on an axis aligned with the engine crankshaft. Although the unit has four speeds, the D range has a simulated shift control pattern that delivers the feel of driving with a 10-speed gearbox.

As vehicle speed rises, engine speed increases with a linear, direct and continuous acceleration feel, free from the “rubber band” effect witnessed in some continuously variable transmissions. In the 10th gear range, the CVT control allows for high-speed cruising at lower engine revs for quiet, smooth and fuel-efficient performance.

The transmission further benefits from an improved version of the artificial intelligence shift control found in conventional automatics. This enables intelligent, optimum gear selection to be made in line with driving conditions and driver inputs, for example when going up or downhill. By reading the vehicle’s acceleration, deceleration and lateral G trajectories, the system can adjust gear shifts to suit the driver’s style and behavior, without the driver having to select a different drive mode to get the kind of performance they want from the transmission.

With to the Multi Stage Hybrid System’s design, the driver is able to take advantage of an M mode to select and hold gears manually, using paddle shifts mounted behind the steering wheel—a function not previously available on a Lexus hybrid. Due to the coordinated control of the Power Split Device and the gear shifting mechanism, the gear shift will start instantaneously with the computer receiving the signal from the paddle shift, giving an exceptionally quick response.

It is the first Lexus hybrid battery to feature a satellite construction design, in which the cell voltage monitoring function has been made separate from the battery ECU. This allows for efficient use of what would otherwise be empty space inside the battery pack to house the wiring harness and battery cooling blower, thus reducing the unit’s overall dimensions. The cooling blower itself has been made more powerful and thinner in size.

GA-L. The LS 500h is built on the new Lexus Global Architecture – Luxury (GA-L) platform, which is shared with the all-new LC. The GA-L platform is the stiffest Lexus has yet created, providing a perfect foundation for improving handling, ride smoothness and cabin quietness. The design of the GA-L platform allows the car’s center of gravity to be made lower, with most of the mass, including the engine and passengers, moved to a more central and lower position in the chassis. This has a direct, positive impact on ride, handling stability and comfort and contributes to a more rewarding and engaging experience at the wheel for the driver.

Collision safety was also the key for development of the GA-L platform. Cabin deformation and the amount of impact energy transferred to the occupants have been minimized. Body structure was enhanced with the use of new bonding technology, lighter materials such as high-tensile strength materials and aluminium bumper reinforcement.

Safety. The LS is equipped with the Lexus Safety System+, additionally featuring a new advanced safety system. It extends the range of active systems available to the driver to help prevent accidents happening, covering the risks presented by four of the most common types of accident: rear-end collisions, collisions with pedestrians; accidents caused by lane departure and accidents at intersections. It operates by combining information from omnidirectional sensors around the vehicle, including stereo cameras, monitoring all operating situations from parking manoeuvres to collision avoidance.

It includes the world’s first intuitive pedestrian detection function with active steering. If a pedestrian is detected on the road ahead and a collision is imminent, this system will automatically apply the car’s brakes and steer around the person, while keeping to its traffic lane. The driver will be alerted to the system’s operation by a warning on the colour head-up display.

Lexus CoDrive, a high-level driving support system, is also being introduced in the new LS. This provides steering control in accordance with the driver’s intention and continuous driving support on motorways.