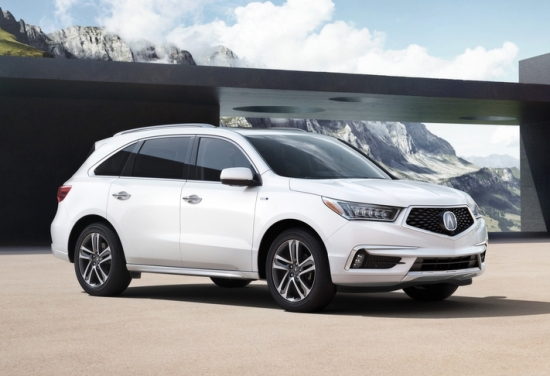 The MDX Sport Hybrid’s Integrated Dynamics System engages with nine different dynamic systems within the vehicle, including its electric motors, throttle, steering, transmission and Active Dampers, to provide the driver with an expanded range of selectable performance characteristics to suit their varied driving needs and desires.

The MDX Sport Hybrid powertrain delivers a total system output of 321 horsepower and 289 lb-ft (392 N·m) of torque, up 31 horsepower over the non-hybrid MDX, making it the most powerful Acura production SUV ever built. EPA fuel economy ratings of 26/27/27 mpg2 (city/highway/combined) are up 8/1/6 mpg over the non-hybrid variant.

An advanced 7-speed dual-clutch transmission (7DCT) is standard, a feature in common with the RLX Sport Hybrid SH-AWD sedan and in 9-speed form in the NSX. Unlike a conventional automatic transmission, the DCT offers ultra-quick gear changes and operates without a torque converter, improving efficiency. The 7DCT can operate in fully automatic mode, or it can be shifted manually via steering wheel-mounted paddle shifters.

The hybrid powertrain also features several advancements as part of the on-going development of Acura hybrid technology, including improvements in cooling and packaging of the IPU and PCU, as well as increased hybrid battery power density.

The MDX Sport Hybrid’s electric SH-AWD system operates independently of the gasoline engine as the two rear-mounted electric motors dynamically apportion both positive and negative torque directly to the rear wheels. This system provides for dynamic, immediate and always-on torque vectoring capabilities while eliminating the weight and energy losses associated with a conventional driveshaft and differential mechanism.

When cornering, the MDX Sport Hybrid delivers positive torque to the outside rear wheel, much like mechanical SH-AWD, to create a yaw moment. In addition, the Sport Hybrid SH-AWD can simultaneously apply regenerative brake torque to the inside rear wheel during cornering to further enhance cornering control, a function unique to the Sport Hybrid powertrain. As the MDX Sport Hybrid doesn’t rely on engine torque, the electrified SUV can create a larger torque difference between the left and right rear wheels, even during small throttle applications, at low engine speeds or when decelerating. This substantially magnifies the positive handling benefits of SH-AWD across a much wider range of driving conditions.

The MDX Sport Hybrid is offered in two grades: the MDX with Technology Package and the MDX with Advance Package. Both grades have exclusive interior trim, stainless steel sport pedals and feature wood interior accents; wood trim accents are only available with the Advance Package for the other two MDX variants. The MDX Sport Hybrid with Technology Package includes versatile seating for seven passengers, while the Advance Package features a 6-passenger interior with second-row captain’s chairs and large second-row center console in place of a three-person bench seat.

The 2017 MDX was designed by the Acura Design Studio in Torrance, Calif. and the MDX Sport Hybrid is manufactured at the company’s Lincoln, Ala. plant using domestic and globally-sourced parts.

If they can hybridize this vehicle then you'd think they could make hybrid pickup trucks too.

Gary:
They can; but, too few people even know what a hybrid is; and, the car companies ain't gonna tell 'em as long as they can still sell the obsolete ICE junk. They make more off Truck and SUV buyers than any other segment.

Too bad they decided to couple 10-year old engine technology to the advanced electric powertrain. This could could only have been done for cost cutting reasons.