Following the start of the project in September 2015, a redox flow battery system (2 MW x 4 hours) was constructed for a power grid at a substation in San Diego. Demonstration will now be carried out to evaluate the management of surplus electricity and regulation of grid frequency and voltage fluctuation. Data on performance in the transmission and distribution grid will also be collected to improve the system's economic value. 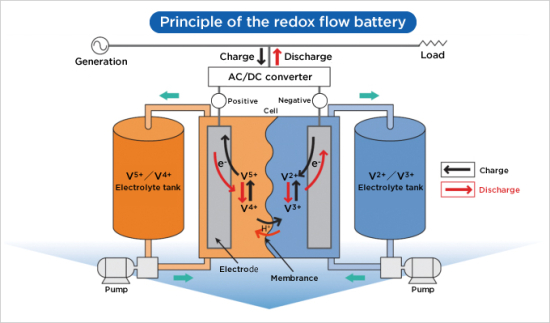 As the redox flow battery has excellent durability and is extremely safe and suitable for both fast response and long duration applications, it is expected to be an effective solution to addressing issues that result from increased integration of renewable energy. More specifically, distribution grid multiple operations, such as management of surplus electricity and regulation of frequency and voltage fluctuations, will be analyzed to determine its technological effectiveness and economic efficiency.

Following this, the redox flow battery system will be controlled by an independent system operator to demonstrate the contribution to ancillary services in market participation and to improve the system’s economic value. Overall, the demonstration evaluates the multiple use of the storage battery system for the transmission and distribution grid. 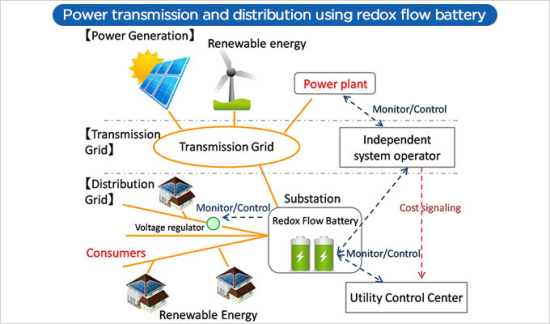 Through the project, NEDO aims to resolve issues related to the increasing integration of renewable energy, such as surplus energy as well as frequency and voltage fluctuations, while analyzing the redox flow battery system to improve cost-effectiveness.

Background. The State of California has set a goal of increasing its renewable portfolio standard, excluding large-scale hydropower generation, to 33% by 2020 and 50% by 2030. These goals are the second-highest renewable energy integration goals after the State of Hawaii. However, issues resulting from increased integration of solar power, including rapid fluctuations of demand and supply balance that occur in the morning and evening (the so-called Duck Curve) as well as low-quality electricity, have become more evident.

For this reason, utilities are now required to install large-scale energy storage systems under California’s Assembly Bill 2514. In addition, public utility organizations are required to collaborate in developing a storage battery roadmap with the aim of expanding revenue opportunities for storage battery systems.

Against this backdrop, NEDO concluded a memorandum of understanding with the State of California Governor’s Office of Business and Economic Development (GO-Biz) for the Demonstration Project for Validation of Redox Flow Battery Performance in California in September 2015. NEDO entrusted its work for implementing the project to Sumitomo Electric, and the project demonstrates the multiple-use of the storage battery system for the transmission and distribution grid in San Diego to improve its economic value and disseminate the system.

This won't work good because the problem is there is too much 'PARTNERS' in the entire electric supply line. It will always be a costly battle of who is producing the electricity, who is storing and releasing it, who collect electric bills, who is maintaining the grid, etc. It is already a big mayhem now and it is getting worse. I told you to stop these climate taxation and subsidy schemes where everybody is cashing ton of cash and the consumer and taxpayers is footing the bills. Since they try to enforce green energy, energy prices have triple. It take a main player in each electric grid that decide what is going on and where it apply. One thrid electricity price almost everywhere in usa and europe. let the main grid player decide how he produce his electricity and if he want to use coal, nat gas, solar or wind. Im sure that the best price is a hybrid power plant where energy is produced by coal at night and assisted by solar heat in the day and use the latest heat conversion transfer critical co2 small low cost Rankine engines. the green climate change policies enforced by lobbyists and california goverment are provoking massive deindustrialisation of trump america where trump and pruitt are completely submerged of problems done by these pressure groups lobbyists. It very simple to cut 2/3 of the electric prices.