Global energy-related carbon dioxide emissions were flat for a third straight year in 2016 even as the global economy grew, according to the International Energy Agency. The data signal a continuing decoupling of emissions and economic activity. This was the result of growing renewable power generation, switches from coal to natural gas, improvements in energy efficiency, as well as structural changes in the global economy.

Global emissions from the energy sector stood at 32.1 gigatonnes last year, the same as the previous two years, while the global economy grew 3.1%, according to estimates from the IEA. Carbon dioxide emissions declined in the United States and China, the world’s two-largest energy users and emitters, and were stable in Europe, offsetting increases in most of the rest of the world. 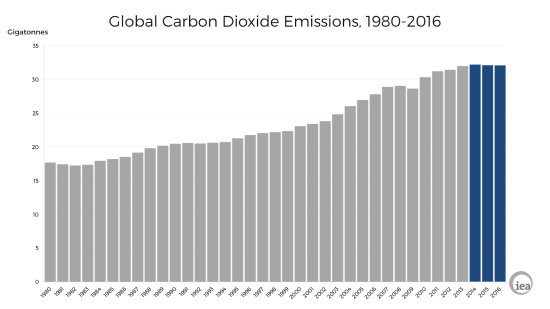 The biggest drop came from the United States, where carbon dioxide emissions fell 3%, or 160 million tonnes, while the economy grew by 1.6%. The decline was driven by a surge in shale gas supplies and more attractive renewable power that displaced coal. Emissions in the United States last year were at their lowest level since 1992, a period during which the economy grew by 80%.

In 2016, renewables supplied more than half the global electricity demand growth, with hydro accounting for half of that share. The overall increase in the world’s nuclear net capacity last year was the highest since 1993, with new reactors coming online in China, the United States, South Korea, India, Russia and Pakistan. Coal demand fell worldwide but the drop was particularly sharp in the United States, where demand was down 11% in 2016. For the first time, electricity generation from natural gas was higher than from coal last year in the United States.

With the appropriate policies, and large amounts of shale reserves, natural gas production in the United States could keep growing strongly in the years to come. This could have three main consequences: it could boost domestic manufacturing, supply more competitive gas to Asia through to LNG exports, and provide alternative gas supplies to Europe. IEA will explore US and natural gas prospects in details in the next World Energy Outlook 2017.

In China, emissions fell by 1% last year, as coal demand declined while the economy expanded by 6.7%. There were several reasons for this trend: an increasing share of renewables, nuclear and natural gas in the power sector, but also a switch from coal to gas in the industrial and buildings sector that was driven in large part by government policies combatting air pollution.

Two-thirds of China’s electricity demand growth, which was up 5.4%, was supplied by renewables—mostly hydro and wind—as well as nuclear. Five new nuclear reactors were connected to the grid in China, increasing its nuclear generation by 25%.

In China, as well as in India, the growth in natural gas is significant, reflecting the impact of air-quality measures to fight pollution as well as energy diversification. The share of gas in the global energy mix is close to a quarter today but in China it is 6% and in India just 5%, which shows they have a large potential to grow.

In the European Union, emissions were largely stable last year as gas demand rose about 8% and coal demand fell 10%. Renewables also played a significant, but smaller, role. The United Kingdom saw a significant coal-to-gas switching in the power sector, thanks to cheaper gas and a carbon price floor.

Market forces, technology cost reductions, and concerns about climate change and air pollution were the main forces behind this decoupling of emissions and economic growth. While the pause in emissions growth is positive news to improve air pollution, it is not enough to put the world on a path to keep global temperatures from rising above 2°C. In order to take full advantage of the potential of technology improvements and market forces, consistent, transparent and predictable policies are needed worldwide.

I almost not contribute to climate change because i drive a small gas car and i drive it slow doing reasonable mpg and im waiting for the battery of john goodenough or the new nissan e-note gasoline serial hybrid that can possibly double my mpg . Unfortunately on the roads almost everybody is going 15 mph faster than me in big suvs, this is a non sense. when they will use critical co2 Rankine engine in electrical power plants that reduce coal use by 40%. We heard of this 6 months ago but since then not a word have been written. do like me and insist that we cut energy use without be stranded by low efficiencies and suffer from a lack of energy. I always use solutions that put money in my pocket instead of relying on big subsidies and taxation scheme that always lead to poor efficiencies.

I look for pollution in the U.S. to increase during the next four years because Trump and the Republicans are hell-bent on undoing the progress made to date and bringing back the pollution created by fossil fuels.

W said China does nothing about it so we won't. Obama said "if you will we will" that got the ball rolling...leadership.

The country that is most efficient will be most prosperous. We can only hope the US is part of this beneficial competition.

Individual, group, national and global efficiency is a moving target and very difficult to establish with enough accuracy.

Can overweight people (over 220 lbs) eating up to 10,000 KCal/day be as efficient as smaller lean people surviving on less than 2000 KCal/day?

Automation can lead to much better overall efficiency. Tomorrow's robots using energy from REs will make the difference.

Harvey: I wonder how much the robots weigh! :-) Just kidding.

I look for air/water pollution in the U.S. to stay about the same during the next few years during Trump's stay in the WH. Everyone will just use the U.S. court system to tie things up for him and the rino party. It's worked on the travel ban issue so far.

Harvey has a negative obsession with fat bus drivers.

Tomorrow's robots could be much lighter, quicker, faster, smarter, more polite and more accurate than most of our obese human drivers, including bus drivers.

Near future development in AI, light composite materials and advanced 3D printing will allow the creation of smart robots of all sizes.

The 40-hour work week will have to be reduced drastically.