Lotus has unveiled a significant update for the Lotus Elise ahead of its arrival in showrooms this spring. The new Sprint edition features the biggest weight cut to the car since the introduction of the first-generation Elise. The Sprint edition of the Lotus Elise has removed 41 kg (90.4 lbs) from the previous model, to reach a benchmark dry weight of just 798 kg (1,759 lbs).

Integrating a new front and rear aesthetic with Lotus’ established design language, this latest Elise also receives a wide range of cabin enhancements, including the lightweight open-gate gear select mechanism first introduced on the Lotus Exige Sport 350. The Sprint is available in both the 1.6-liter naturally aspirated and 1.8-liter supercharged versions. 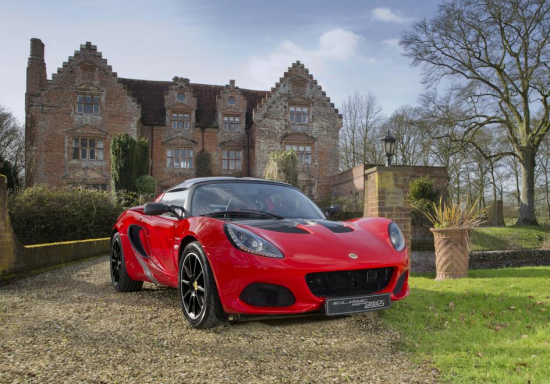 The Sprint’s standard lightweight components include a Lithium-Ion battery, saving 9 kg; carbon race seats, 6 kg; new lightweight forged alloy wheels, 5 kg; while the carbon access panel, roll hoop cover and engine cover, and polycarbonate rear screen save 6 kg. Collectively they cut 26 kg compared to the previous Sport and Sport 220 models, and together with the improvements made to the whole Elise range bring the weight of the new Elise Sprint down to just 798 kg (dry).

As well as a new Elise Sprint edition, the whole of the new Elise line-up benefits from a range of improvements, which includes a 10 kg mass reduction thanks to a number of new components.

Changes to the body including a redesigned lightweight front clam panel, with wider radiator apertures and mesh pattern grille provide a more aggressive aspect and 8.7 kg less weight. The new design of rear transom panel now has two rear light clusters, rather than four, with reversing and fog lights now mounted inboard so reducing weight by 0.3 kg and visually enhancing the rear design.

Modifications front and back are more than skin deep and have allowed the careful balancing of aerodynamic downforce across the whole car. Rubber elements mounted on the flat underside and ahead of the front wheel, together with an additional diffuser vane at the rear, help modify airflow under the car reducing drag and increasing stability.

In addition to injecting some visual drama into the new Elise’s cabin, Lotus’ open-gate manual gearbox also provides a much more positive and direct operation—giving more precise and quicker shifting. It also further reduces weight with a net saving of 1 kg.

The cabin also benefits from a new center console, as seen on the Exige and optional carbon sill covers which reduce weight by 0.8 kg and increase the door aperture by up to 10 mm, aiding ingress and egress.