The State SIP Strategy also includes targeted introduction of zero-emission technologies in heavy-duty applications that are suited to early adoption of ZEV technologies. Actions to promote ZEVs in these applications are important to foster further technology development so they become suitable for broader use in the future.

Continued actions to set more stringent standards, coupled with programs to increase the penetration of those technologies into the fleet will reduce NOx emissions from passenger vehicles and trucks by 85% from today’s levels in the South Coast.

Approximately 70% of the reductions needed to meet the ozone standard in the South Coast in 2031 would come from existing or proposed regulatory actions. This includes ongoing implementation of the existing control program, combined with new regulatory measures identified in the State SIP Strategy. The regulatory approach forms the basis of the strategy, and is critical to drive technology development and deployment of the cleanest near-zero and zero-emission technologies into the fleet.

The remaining 30% of reductions would come from additional efforts to enhance the deployment of these cleaner technologies through new incentive or new regulatory actions. These actions would be implemented through the Further Deployment measures, tailored for each mobile sector, that have been developed to provide further emission reductions from the deployment of cleaner technologies necessary to meet the South Coast’s Extreme ozone non-attainment area needs.

The proposed measures, in combination with ongoing implementation of the current control program, will reduce mobile source NOx emissions 80% from today’s levels in the South Coast by 2031, as well as reduce ROG emissions by 70%, and PM2.5 emissions by more than 20%.

While current control programs provide all of the reductions needed for meeting the 75 ppb ozone standard in the Valley, the measures in the SIP Strategy will enhance progress towards meeting the standard. Overall, these actions will reduce NOx emissions in the Valley from today’s levels 60% by 2025, increasing to 70% by 2031. 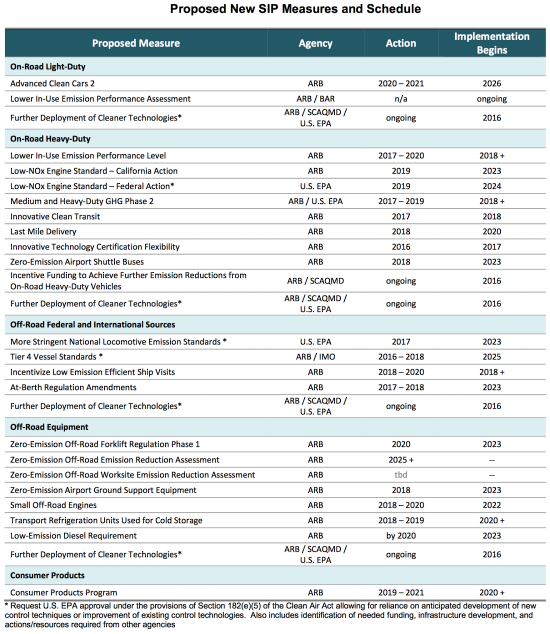 In parallel to actions at the state level, CARB will continue to call for strong federal action to develop more stringent engine standards for cars, trucks, ships, aircraft and locomotives.

The South Coast’s Air Quality Management Plan (AQMP) is a comprehensive roadmap for meeting ozone and fine particulate matter (PM2.5) standards in both the South Coast region and the Coachella Valley. In conjunction with state actions to reduce mobile source emissions, the South Coast AQMP includes a broad spectrum of measures to transition residential and commercial homes and buildings to cleaner energy sources, from electrification and fuel cells to solar power.

The District’s plan also contains important actions to achieve further reductions of pollutants from large industrial facilities such as refineries and power plants. Attaining federal air quality standards will provide significant public health protection for the 17 million residents who live in the region, estimated by the District to total $173 billion in cumulative health benefits between today and 2031.

SLCPs. Super pollutants have more potent heat-trapping effects but remain in the atmosphere for a shorter time than carbon dioxide. Reducing these pollutants can have a more immediate beneficial impact on climate change, and reduces harmful toxins, such as cancer-causing particulates, in California communities.

Short-lived climate pollutants (SLCPs) make up about 12% of GHG emissions, but strong actions to reduce them could help reduce global warming by as much as 40%.

This plan to curb super pollutants will accelerate reaching our 2030 goal of a 40 percent reduction in GHG emissions below 1990 levels. This plan will also help reduce nitrous oxide, a potent greenhouse gas, and fine particle pollution.

The SLCP Strategy is a critical part of California’s emission-reduction framework being developed in the draft Proposed 2030 Scoping Plan. The framework also includes the Cap-and-Trade Program, the Mobile Source Strategy, the Advanced Clean Car Program, the Renewables Portfolio Standard and the Low Carbon Fuel Standard.

A key piece of the SLCP Strategy is a new regulation aimed at reducing methane leaks from oil and gas operations. It requires emissions-capture technology and stricter monitoring and reporting of potential methane leaks as a means of isolating and fixing them more quickly. That rule, which the Board will take up later today, will be fully in effect by 2020.

The SLCP Strategy also reduces hydrofluorocarbons, traditionally used in refrigeration, air conditioning, insulation and propellants. Substitutes for HFCs are growing in use and continue to be developed. CARB’s efforts are expected to result in HFC reductions of 25 percent below business-as-usual emissions by 2020. CARB is currently preparing a detailed analysis of future HFC emissions which will undergo a third-party review.

Last fall, Governor Brown Signed SB 1383 by Senator Ricardo Lara (D-Bell Gardens), an ex-officio CARB board member. SB 1383 sets targets for reductions in methane emissions of 40 percent below 2013 levels by 2030, a 40% reduction in HFCs and a 50% reduction in black carbon. SB 1383 also provides general guidance for regulation of short-lived climate pollutants and requires the Board to complete and approve a plan by 1 January 2018.

CARB began publicly evaluating controls for SLCPs with the first AB 32 Scoping Plan in 2008 and has held at least 10 workshops and public hearings to gather input. Since then Governor Brown signed SB 32, codifying a reduction target for statewide GHG emissions of 40 percent below 1990 emission levels by 2030. SLCP emission reductions will support achieving this target.

California has already reduced black carbon emissions 90% since the 1970s, largely through the state’s stringent diesel regulations. The SLCP Strategy will rely on a variety of tools, including putting zero-emission vehicles on the road and into ports and rail yards, more mass transit, cleaning up woodstoves, and cleaner fuels.