The London Taxi Company (LTC) officially opened the UK’s first car plant dedicated solely to the production of range-extended electric vehicles. The new vehicle plant in Ansty, Coventry, will build the world’s first purpose-built, mass-market electric taxi. LTC, a wholly-owned subsidiary of Geely, has invested more than £300-million (US$374-million) in the new site and the next-generation London taxi, which will be produced at the plant and exported around the world.

LTC also announced that the second vehicle model to come off the new line will be a dedicated, range-extended electric light commercial van (LCV), based on the same extended-range EV platform as the taxi. 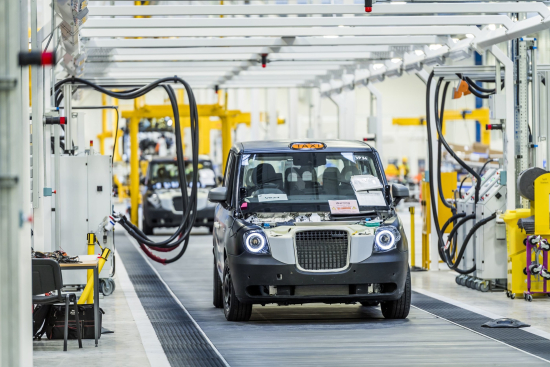 The site has the capacity to build more than 20,000 vehicles per year. The taxi uses proven Volvo Cars electric powertrain system technologies and components in the new EV lightweight platform, while retaining the iconic design heritage recognized around the world. (Geely also owns Volvo Cars.)

Each test vehicle will cover almost 500,000 kilometers, often in extreme conditions, to ensure that no city is off-limits. This program is intended to deliver world-leading urban commercial vehicles, which meet the highest levels of quality, reliability and usability, purposefully designed for demanding daily drive cycles.

The all-new electric taxi goes on sale first in London in Q4 2017, and then globally in early 2018. The new vehicle will be highly competitive with substantially lower fuel costs than its previous taxis, LTC said.

Electrification is a key component of the global strategy to reduce emissions and the London Taxi Company is determined to apply its expertise in advanced electric vehicle technology, and the taxi market, to urban commercial vehicles.

In addition to our brand-new taxi, the manufacturing of this all new light commercial van is a transformative step for the company as we will move from a single product, single market organization to a multi-product, multi market organization. We remain absolutely committed to designing and manufacturing dedicated, range extended EVs that build upon our deep knowledge of advanced technologies and the needs of the urban commercial sector.

With the EV platform and manufacturing capability already in place, designed for flexible production from day one, the company can bring to market the new LCV through an incremental additional investment of around £30 million (US$37 million).

The new vehicle will help to meet emissions targets in cities around the world, as well as being able to handle the toughest urban environments. Importantly for drivers, the vehicle will be city-ready and lower running costs, even as electric charging infrastructure continues to develop.

I am extremely proud to see Geely’s investment in the London Taxi Company allow it to evolve beyond the taxi market. The light commercial van sector in cities across the globe holds enormous potential and urban leaders are embracing zero emissions at an incredibly rapid pace. This vehicle is a result of the new R&D team based at Ansty and will complement Geely’s global expertise in electric vehicle technology adding to the world class talent across the group

It is going to fail because they are not fully self-driving. By 2020 the Tesla Network could do all zero emission taxi driving in London for a fraction of the price per kilometer than this London Taxi.

London taxis are a real world success and this electrified version will be another success. With Geely/Volvo involved, it will quickly become a worldwide success and will soon be used in many major cities.

This type of electrified vehicles for (taxis and delivery vans) will operate for up to 20+ years before electrified ADVs reach the market place in great numbers.

There is so much spare auto plant capacity in the U.S. we could make EV mail trucks, taxis and other vehicles, but we have a system that demands maximizing profit so the capital rent seeks globally.

Not a word about all-electric range, battery size, nor piston count? Maybe the vehicle specs are not final and this is just a facility announcement...