EIA: US energy-related CO2 dropped 2.7% in 2015; of end-use sectors, only transportation increased

According to a report from the US Energy Information Administration (EIA), US energy-related CO2 emissions decreased by 146 million metric tons (MMmt) in 2015 to 5,259 MMmt, down 2.7% from 5,405 MMmt in 2014. This decline occurred despite growth in real gross domestic product (GDP) of 2.6% as other factors more than offset the growth in GDP. Energy-related CO2 emissions in 2015 were about 12% below 2005 levels.

These factors included a decline in the carbon intensity of the energy supply (CO2/British thermal units [Btu]) of 1.8%; and a 3.4% decline in energy intensity (Btu/GDP). Of the four end-use sectors, only transportation emissions increased in 2015 (+2.1%). 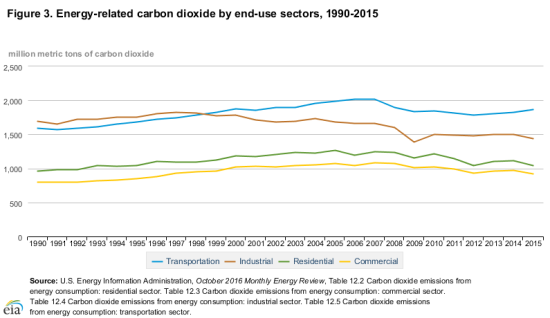 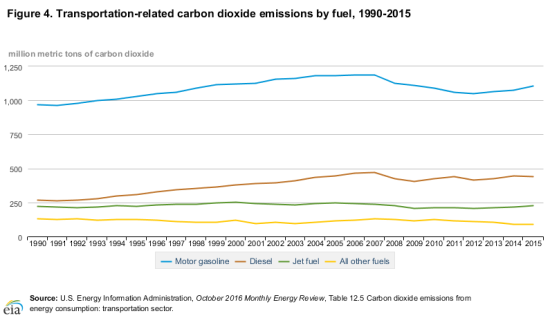 According to the EIA, the 2015 increase in energy-related carbon dioxide emissions from the transportation sector was led by gasoline.

The 28% decrease in gasoline prices (in nominal dollars) from 2014 to 2015, along with the continued economic recovery, led to higher fuel consumption. Transportation-related CO2 emissions increased by 38 million metric tons (MMmt) (2.1%) in 2015.

Electricity. The trend of declining coal-fired electricity generation in the power sector and increasing non-fossil and natural gas-fired generation continued in 2015.