Home About Contact RSS GCC Twitter Newsletter
Scania reports a 40% increase in sales of vehicles that run on alternative fuels and hybrids in 2016
London and Paris launch car scoring initiative based on real-world emissions; ICCT the technical lead

Ascend worked with Tructronics Inc., idea Solutions Design, and JB Mechanical to integrate and install a commercial 1000 Watt Atrex Energy fuel cell power generator fueled with compressed natural gas in an all-electric Polaris Ranger ATV. ATVs are in common use in California farms, ranches and orchards as a utility vehicle but the gasoline-fueled versions make a significant contribution to poor air quality in the farm regions of the state.

The SOFC electric ATV has been in durability, performance and emissions testing for months and has exceeded all expected results, the partners said. With more than 100 miles on the vehicle, the range and durability has been shown. The range increased 300% using a real world 2.3-mile (3.7 km) off-road test loop; fuel consumption was one-third that of the conventional gasoline version under the same conditions; and the fuel cell vehicle had no detectable nitrogen oxide emissions (a key component of smog) in contrast to the 100+ parts per million of nitrogen oxides in the exhaust from the gasoline vehicle.

The next step is to test the vehicle using propane, a much more common fuel found on farms, and see if the results are similar.

Atrex Energy. Atrex Energy has worked on research and development of a commercially viable power generator utilizing Solid Oxide Fuel Cells (SOFC) since 2000. The company has made substantial progress in improving the technology over this timeframe:

SOFC technology uses low-cost, stable ceramics as its electrolyte layer; the use of ceramics and high temperatures eliminate the need for expensive metal catalysts such platinum which are used in PEM fuel cells. The high temperatures (600°C to 800°C) used in the Atrex Energy design allows conventional hydrocarbon fuels such as natural gas, propane and lpg to be used directly without requiring an external reforming process. There is no need to transport or store hydrogen, avoiding another layer of complexity.

While most SOFCs use a planar design—thin sheets of material forming the layers—Atrex developed a tubular design in which the layers are added to a cylindrical base.

Atrex forms its tubular SOFCs by by hydraulically pressing ceramic anode material into tubes and coating the tubes with an electrolyte layer and then a cathode layer; the anode is on the inside of the tube, while the cathode is on the outside. The fuel is injected inside the tube; air is on the outside.

With the Atrex Energy SOFC design, reforming of the fuel takes place inside the tubes using commercially available fuels with hydrogen-rich content, such as natural gas and propane. By combining a small amount of air with the fuel inside the tubes, along with the inherent temperature of the Atrex Energy SOFC process, the fuel is automatically reformed to produce the needed hydrogen as well as carbon 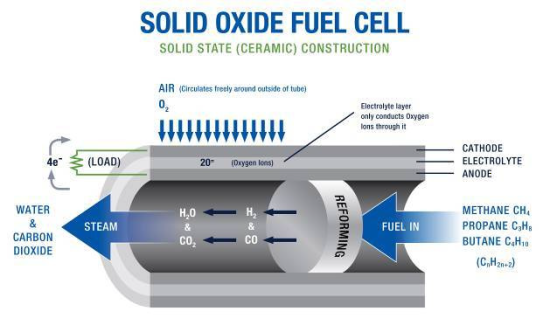 The zirconium oxide electrolyte allows only oxygen ions to pass through, carrying electrons from the cathode to the anode. This design provides a very strong structure and makes it relatively easy to seal, preventing the air and fuel from mixing.

Atrex Energy assembles the tubes into a bundle or stack. This creates a fuel cell system that can currently handle loads from 100 watts up to 4.5kW. The net result is a power generator that produces clean electricity more efficiently than other power generation technologies.

The only by-products of the Atrex Energy SOFC design are water vapor, heat and low levels of carbon dioxide. Because operation is below the high temperature of internal combustion engines or turbines, fuel cells have nearly undetectable levels of NOx. The desulfurizing fuel filters along with the high efficiency of Atrex Energy’s fuel cell reduces the sulfur oxide (SOx) emissions to negligible levels. Efficiency is further enhanced when the heat is recovered for heating, hot water and processing purposes.

The patented tubular design eliminates catastrophic damage due to temperature gradients. Temperature gradients occur during the normal thermal cycling that takes place during start-up, shut down and load changes. This cycling, over the lifetime of the unit, introduces stresses that could eventually manifest into cracks and ultimately failure.

The small radius geometry of Atrex Energy’s tubes, their inherent strength, the strong seal at one end and the operation under low pressure combine to minimize temperature gradients. This allows the tubes to easily tolerate thermal cycling. In addition, Atrex Energy’s tubular design is much more tolerant to the stresses from internal reforming, the company said.