ŠKODA will stage the world premiere of the VISION E electric concept vehicle at the upcoming Shanghai Motor Show 2017 (19 – 28 April). The five-door SUV coupé can travel up to 500 km (311 miles) on purely electric power and meets the level 3 requirements for autonomous driving. ŠKODA, a member of the Volkswagen Group, is intensively pursuing the electrification of its model range, and will be offering five purely electric models in various segments by 2025.

With system output of 225 kW, the ŠKODA VISION E accelerates instantaneously and dynamically. The top speed of the two-motor, all-wheel drive concept is 180 km/h (112 mph). The front- and rear-wheel drive is suitably adjusted to ensure the highest degree of stability, dynamism and safety at all times. 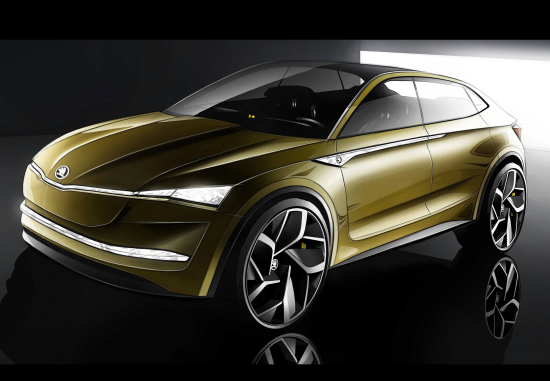 With the VISION E, ŠKODA is also providing an outlook on the forms of autonomous driving coming soon. According to the latest surveys, around 15% of all new cars could be driving completely autonomously in 2030. The concept car ŠKODA VISION E achieves the prerequisites for SAE Level 3 autonomous driving—it can operate independently in traffic jams, go into autopilot on motorways, stay in lane and swerve, carry out overtaking maneuvers, independently search for free parking spaces and park and leave parking spaces alone. To enable this, various sensors with different ranges and numerous cameras constantly monitor the traffic situation.

ŠKODA is developing its own vehicle concepts for purely electric mobility on the basis of the Volkswagen Group’s MEB platform. (Earlier post.)

The electrification of ŠKODA’s model range will begin as early as 2019 with the launch of the ŠKODA SUPERB with plug-in hybrid drive. ŠKODA’s first purely electric series-produced vehicle will be released shortly afterwards in 2020. By 2025, the brand will have expanded its range to include five purely electric cars in various segments.

Škoda delivered more than 1 million vehicles to customers worldwide in 2016. It has belonged to Volkswagen Group since 1991. Škoda, in association with the Group, independently manufactures and develops vehicles, as well as components, engines and gear transmissions. Škoda operates at three locations in the Czech Republic, produces in China, Russia, Slovakia and India mainly through Group partnerships, as well as in Ukraine and Kazakhstan through local partners.

Yeah yeah, it have a long range and drive autonomously but what about finding a suitable fast charger while on the road, this is important everywhere because not all peoples have a big parking at their home and take the petrol plane while traveling long distance like elon musk and al gore do when they travel the entire world to promote climate change catastrophy that will eradicate earth civilisation before april 2031. These guy are already planning their escape to mars.

311 miles would suffice for 98% of the driving my family does. The remainder would require either a different vehicle (perhaps rented), or carefully planned charging station logistics. An 800 mile range would be ideal, but I frankly expect that to never happen (we're apt to get faster charging first).

Environmental dissonance trigger warning:
I suspect that in the not-too-distant future it won't be unusual to see a pure EV SUV pulling a trailer with a generator strapped to it. If the generator is running as the SUV passes by, you'll also know that the SUV's firmware has been hacked to allow charging while in motion.

IMO 140 mile range may be the "sweet spot". Rent a car on the weekends at discount rates if you want to go out of town, put the miles on their car.

Anything the accelerates STARTS accelerating instantly, but if it reaches maximum acceleration instantaneously, what is that in G forces?

If the price is right (below $40K) this could be one of the first affordable extended range (500+ Km) AWD SUV.

Near future 3X and 4X batteries will raise the range to 800+ Km for users who want to spend a few more dollars.