Bosch and Daimler are collaborating to advance the development of fully automated and driverless driving. The two companies have entered into a development agreement to bring fully automated (SAE Level 4) and driverless (SAE Level 5) driving to urban roads by the beginning of the next decade. The objective is to develop software and algorithms for an autonomous driving system.

The prime objective of the project is to achieve the production-ready development of a driving system which will allow cars to drive fully autonomously in the city. The idea behind it is that the vehicle should come to the driver rather than the other way round. Within a specified area of town, customers will be able to order an automated shared car via their smartphone. The vehicle will then make its way autonomously to the user and the onward journey can commence. 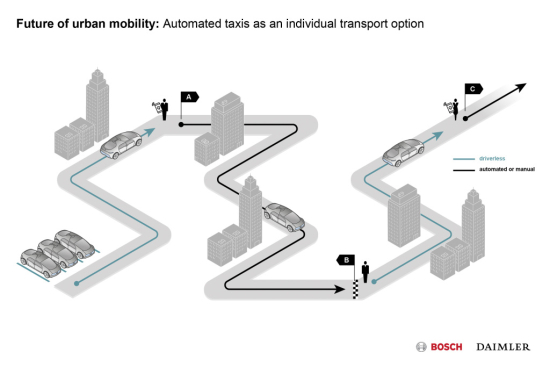 By introducing fully automated and driverless driving to the urban environment, Bosch and Daimler aim to improve the flow of traffic in cities, enhance safety on the road and provide an important building block for the way traffic will work in the future. The technology will, among other things, boost the attraction of car sharing. It will allow people to make the best possible use of their time in the vehicle and open up new mobility opportunities for people without a driver’s licence, for example.

The level of performance of Xavier is necessary to handle the massive amount of computation required for the tasks self-driving vehicles must perform. These include running deep neural nets to sense surroundings, understanding the 3D environment, localizing themselves on an HD map, predicting the behavior and position of other objects, as well as computing car dynamics and a safe path forward.