The e-tron Sportback uses a three-motor, all-wheel-drive system that will also be adopted in future production Audi models with all-electric drive: one electric motor on the front axle and two on the rear powering all four wheels, transforming the high-performance coupé into an e-quattro. The 320 kW of system power—370 kW in boost mode—propels the electric Sportback 0 to 100 km/h (62.1 mph) in 4.5 seconds. With the battery’s energy content of 95 kilowatt-hours, range is in excess of 500 kilometers (310.7 miles) (NEDC). 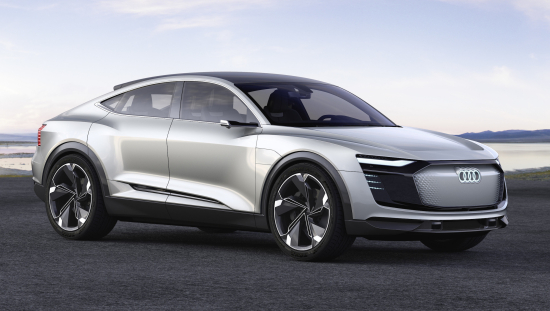 We have made a conscious decision to give the Audi e-tron Sportback its first showing here in Shanghai, because China is the world’s leading market for electric automobiles. That applies as much to the infrastructure and financial support as it does to sales. There are already about 150,000 charging stations in the country, with another 100,000 due to come on stream by the end of 2017. We are well equipped for this rapid growth. In the next five years we will be offering five e-tron models in China, including purely battery-powered vehicles with ranges well in excess of 500 kilometers (310.7 miles) such as the Audi e-tron Sportback.

—Dr. Dietmar Voggenreiter, Member of the Board of Management for Marketing and Sales at AUDI AG

Audi first showcased the concept for the three electric motors in its Audi e-tron quattro concept study car at the 2015 Frankfurt Motor Show; the drive system, which provides a high level of advanced torque vectoring capability, is now bound for use in future production versions.

A controller continuously computes the optimal interplay of the electric motors for every driving situation. At low load, only the motor on the front axle provides propulsion. When the driver floors the accelerator in the S driving mode and all three electric motors are working together, 370 kW of output and more than 800 N·m (590.0 lb‑ft) of torque are available in the boost mode. In the standard D driving program, the e-tron Sportback delivers 320 kW. 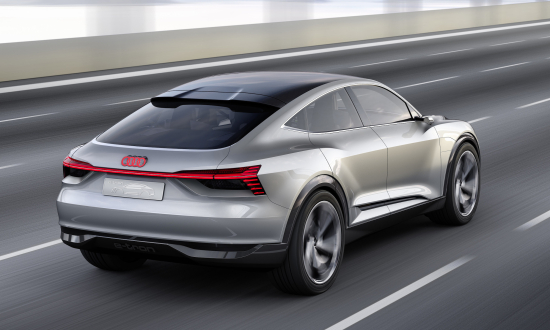 The key drive train management parameters are the position of the accelerator, the mode chosen in the Audi drive select dynamic handling system, the driving program— S or D—and the battery charge level. The data on the near surroundings from the sensors for piloted driving, the predictive route data from the navigation system and the real-time traffic information from Audi connect also flow into this computation, always with the aim of optimally adjusting the drive train to the prevailing conditions.

Audi is focused not just on performance, but also maximum efficiency. Before even starting out, the driver can have the Audi e-tron Sportback concept compute a drive train strategy to minimize energy consumption. When under way, the Audi e-tron recovers large amounts of energy.

Up to moderate braking, the electric motors are solely responsible for decelerating the vehicle. The hydraulic brakes only come into play for heavy braking. The driver can adjust the degree of recuperation in stages. At the lowest setting, no energy is recovered at all in certain situations. Instead, the isolated drive allows the coupé to coast without any retardation torque— one of the most effective strategies for increasing the range.

Torque Control Manager, which works together with the Electronic Stabilization Control (ESC), actively and variably distributes the power between the wheels as necessary. ( Earlier post.) This torque control provides for maximum dynamics and stability. Due to the virtually instantaneous response of the electric motors, the control actions are lightning-quick. The drive concept of the Audi e-tron Sportback concept adapts perfectly to every situation, whether involving transverse or longitudinal dynamics.

Battery and wireless charging. As on the e-tron quattro SUV concept, the technology study’s lithium-ion battery is positioned between the axles below the passenger compartment. This installation position provides for a low center of gravity and a balanced axle load distribution of 52:48 (front/rear). The large battery block is bolted to the floor structure. With a modular design, the battery is in principle also suitable for other automobile concepts.

A full charge of the 95 kWh pack provides for a range of more than 500 kilometers (310.7 miles) in the NEDC. The Combined Charging System with two connectors enables charging with alternating current (AC) and direct current (DC). With direct current and the charging power of 150 kW targeted by Audi, the large battery can store enough energy for up to 400 kilometers (248.5 miles) in approximately 30 minutes.

With its geometry and slightly inclined installation position, the charging socket on the front fender is ergonomic. Alternatively contactless inductive charging of the Audi e-tron Sportback concept is possible with Audi Wireless Charging (AWC). This is done by siting a charging pad with integral coil on the floor where the car is to be parked, and connecting it to the power supply. The piloted parking system positions the Audi e-tron Sportback concept over the charging pad with centimeter precision. The charging process then starts automatically. The alternating magnetic field induces an alternating voltage in the secondary coil fitted in the floor of the car, across the air gap. The alternating current is converted into direct current by the on-board power electronics and the battery is charged with an output of up to 11 kW kilowatts.

The charging process stops automatically when the battery is fully charged. Audi Wireless Charging technology reaches an efficiency of more than 90%, making it comparable in efficiency to charging with a cable. The alternating field represents no danger to humans or animals. It is only generated when a car is standing above the induction pad. Drivers can monitor the charging process on their smartphone using an app from the Audi connect portfolio. All charging and climate control functions can be controlled remotely with this app.

The heat pump also contributes to the efficiency of the concept study. It uses the waste heat of the electrical components to climatize the interior and is thus a central component of the thermal management system.

The front and rear axles are lightweight, five-link constructions made of aluminum and high-strength steel. The wheels measure 23 inches in diameter and are fitted with 285/30 tires. Large brake disks with a diameter of 20 inches at the front and 19 inches at the rear slow down the Audi e-tron Sportback concept safely and reliably. 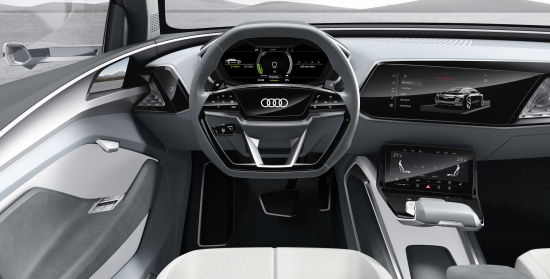 Cockpit and interior. The display and control modules in the Audi e-tron Sportback concept are deeply integrated into the sculptural, horizontal architecture of the cockpit. This is characterized by the large TFT and OLED displays.

In its main menu the Audi virtual cockpit behind the steering wheel—framed by a separate, slim cowl—displays the speed, battery charge and range. To the left and right of the Audi virtual cockpit, there are two touch-sensitive control surfaces. The driver uses the compact unit on the left to control the lighting functions. The one on the right—a 10-inch OLED touch display—is for controlling the infotainment and navigation systems. The functions in the main menu appear as a neat arrangement of tiles which each calls up the respective submenus. Important functions can also be operated using hot keys.

Below this large display on the center console, there is a further touch-sensitive OLED screen for operating the climate control and various auxiliary functions. All occupants can read off information on the ambient air quality on an overhead module.

Towards the front of the door shoulders there is a further display with gently curving surfaces that serves as a digital exterior mirror. Its specially processed camera image is bright even in poor lighting conditions, with good contrast and no glare.

The two rear passengers in the Audi e-tron Sportback concept likewise have their own touch displays in the door shoulders. They also use these to operate the climate control and infotainment for their area or to exchange media data with the driver. When the car is stationary, the displays can show the images from the exterior mirror cameras. This helps occupants to locate road users approaching the car from behind before they open the door, reducing the risk of collision.

The concept study is connected to the Internet by an LTE module. Passengers can surf the web and send e‑mails with their mobile devices. Tailored services from the Audi connect portfolio are delivered to the car for the driver.

The driver can also operate many functions of the Audi e-tron Sportback concept from the flat-bottomed steering wheel. Its horizontal spokes are equipped with touch surfaces. The driver selects the recuperation levels with two paddles.

The center console includes a flat, slim selector lever with a slide control on its left for selecting the driving programs. The driver moves between the drive positions by gently tapping it forward and back.

Superb ! Just I don't understand why it won't be enabled for Porsche best of breed 800V/350KW hyper fast charger ?
Why not standardize all VW group on that best in class level so far ? Does not make sense to be limited at 150KW for such a great car !

Cost maybe ?
You can fully charge in 40 minutes, anyhow, which is enough time to eat a meal.
Note that at 150Kw, it has a 10:1 drive - charge ratio for moderate driving (assuming moderate driving at 15 Kw).

Superior design with 3 e-motors and batteries in the right places and enough range for most users.

Others will have o catch up?