Mercedes-Benz chose Auto Shanghai 2017 as the venue for the world première of the new S-Class. Among the highlights is new efficient engine range and a series of new technologies for electrification of the powertrain. Several new engines are planned for the new S-Class: in-line six cylinder diesel and gasoline engines as well as a new V-8 biturbo gasoline engine.

In addition, Mercedes-Benz plans a plug-in hybrid with an electric range of about 50 kilometers (31 miles). Technologies such as the 48-volt Integrated Starter Alternator and the electric booster compressor celebrate their world première in the lineup as well. The market launch of the new S-Class starts in the European markets in July. 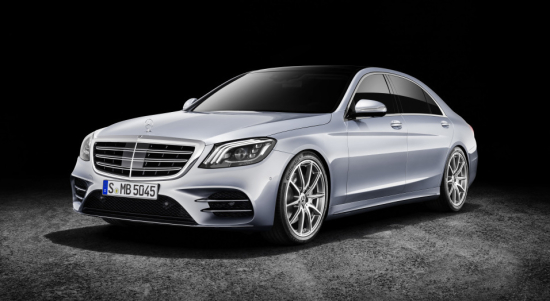 The Integrated Starter Alternator is responsible for hybrid functions, such as boost or energy recovery, while allowing fuel savings that were previously reserved for high-voltage hybrid technology. The new R-6 engine will deliver the performance of an eight-cylinder with significantly lower consumption.

Systematic electrification dispenses with the need for a belt drive for ancillary components at the front of the engine, which reduces its overall length. The slim design, together with the physical separation of intake/exhaust, creates space for near-engine exhaust aftertreatment.

The 48-volt on-board power supply serves not only high power consumers, such as the water pump and air-conditioning compressor, but also the Integrated Starter Alternator, which also supplies energy to the battery by means of highly efficient energy recovery. The new in-line six-cylinder comes to the starting line in two output levels.

Upgraded plug-in hybrid powertrain. With significantly increased battery capacity of 13.3 kWh, the range for all-electric driving in the PHEV model will increase to about 50 km. In conjunction with the new Mercedes-Benz Wallbox, the on-board 7.2-kW charger allows much faster charging of the battery.

New engines with landmark technology. Other engines for the new S-Class include:

Intelligent Drive: the next step in driving assistance systems. The new S-Class takes another step towards autonomous driving, elevating Mercedes-Benz Intelligent Drive to the next level. DISTRONIC Active Proximity Control and Active Steer Assist now provide even more comfortable support for the driver to keep a safe distance and steer. The speed is now adjusted automatically ahead of curves or junctions. This is complemented by an improved Active Lane Change Assist and additional functions of the Active Emergency Stop Assist.

With enhanced camera and radar systems, the new S-Class has a better view of the surrounding traffic: In addition, for the first time it makes use of map and navigation data to calculate driving behavior. DISTRONIC Active Proximity Assist is thus able to assist the driver in many situations based on the route, and conveniently adjust the vehicle speed.

The “Assistance Graphics” menu of the instrument panel shows the driver at one glance which assistance functions are selected and to what situations the systems are currently responding. Unmistakable icons provide information on the screen as well in the head-up display. All functions are now controlled from the steering wheel. The new Driving Assistance package includes but is not limited to the following functions:

MAGIC BODY CONTROL improved and now with CURVE function. The S-Class’ 2013 ROAD SURFACE SCAN detected bumps ahead of the vehicle and adjusted the ACTIVE BODY CONTROL suspension accordingly. In the new S-Class this suspension control is further improved: The stereo camera of the system now scans the road even more thoroughly, even in dusk and at speeds up to 180 km/h (112 mph). Another comfort enhancement is the CURVE curve-tilting function, available in the S-Class for the first time. The body tilts to the inside of the turn by up to 2.65 degrees and thereby reduces the centrifugal forces perceived by the passengers.

Look, I'm a software engineer. I know that a $10 dollar camera and some software can stop cars from killing pedestrians and running into other cars. Come on MB, turn on the full suite now. If you can't make it work, I have some advice... call Tesla.

It is amazing how complex our engines have become, yet how good they are. Still, when I list all of the "stuff" we have added to engines to make them clean, efficient and drivable, it suggests we may be approaching at tipping point in favor of electric propulsion for our daily driving needs: