Announced at a press conference with Port officials and representatives from California Air Resources Board (CARB) and the California Energy Commission (CEC), the zero-emission truck proof-of-concept will take part in a feasibility study examining the potential of fuel cell technology in heavy duty applications. The study will begin this summer and contribute to the Port’s Clean Air Action Plan, which has significantly reduced harmful emissions from operations at the Ports of Long Beach and Los Angeles since 2005. 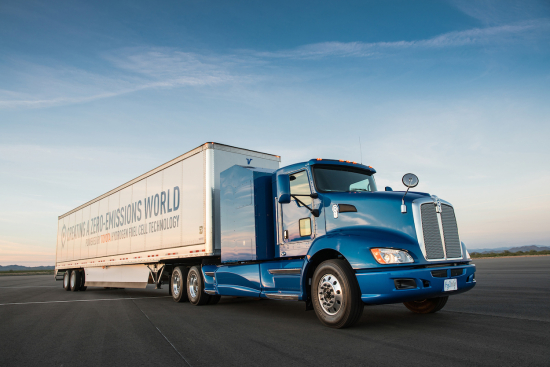 As they did with the Prius and the Mirai, Toyota is taking a leap into the future of technology. By bringing this heavy-duty, zero-emission hydrogen fuel cell proof-of-concept truck to the Port, Toyota has planted a flag that we hope many others will follow. CARB will be following the progress of this feasibility study with interest, as we look to develop the best mix of regulations and incentives to rapidly expand the market for the cleanest, most efficient big trucks to meet the need for dramatic change in the freight sector.

Project Portal is the next step in Toyota’s effort to broaden the application of zero-emission fuel cell technology that can serve a range of industries. It is a fully functioning heavy-duty truck with the power and torque capacity to conduct port drayage operations while emitting nothing but water vapor. Heavy-duty vehicles make up a significant percentage of the annual emissions output at the Port of Los Angeles, and the Portal feasibility study may provide another path to further reduce emissions.

The Project Portal platform is designed to provide the target performance required to support port drayage operations. The truck generates more than 670 hp and 1325 lb-ft (1796 N·m) of torque from two Mirai fuel cell stacks and a 12 kWh battery—a relatively small battery to support Class-8 load operations. As shown in the video below, the fuel-cell truck delivers excellent acceleration performance, compared to a conventional diesel.

The concept’s gross combined weight capacity is 80,000 lbs., and its estimated driving range is more than 200 miles per fill, under normal drayage operation.

Project Portal is just one part of Toyota’s ongoing commitment to fuel cell technology. It follows on the company’s continued work to expand California’s hydrogen refueling infrastructure, including the recently announced partnership with Shell to increase the number of hydrogen refueling stations in the state. (Earlier post.)

Hydrogen fuel cell vehicles play a role in California’s efforts to achieve greenhouse gas emission reduction goals, improve air quality, and reduce our reliance on fossil fuels. That’s why the California Energy Commission is investing in the refueling infrastructure needed to support adoption of these vehicles. The Commission applauds Toyota for putting this cutting edge technology to use a heavy-duty freight proof of concept. This demo will show how fuel cells can help support the heavy-duty sector’s efforts to increase efficiency, transition to zero-emission technologies, and increase competitiveness.

I am a little unsure what the purpose of this truck is. If they are just moving containers around the terminal or other relative short distances, the Orange BEV is probably a better choice. See https://orangeev.com/ The truck shown in the pictures looks more like a long haul truck and battery electric probably will not work for long haul trucking with current battery technology. But drayage implies short haul.

Additionally, 0-60 times are irrelevant in drayage use anyway.

In the US the same rules state: You can drive a maximum of 11 hours after 10 consecutive hours off duty.
You must take a 30-minute break, at a time of your choosing, within the previous 8 hours. This means before 8 hours, in real time, has past you need to take a 30-minute break. The 8-hour clock starts again once you complete your break.
You cannot drive beyond the 14th hour after coming on duty, following 10 consecutive hours off duty. This works like the 16-hour rule in Canada, but it’s 14 hours and 10 hours Off-Duty. This differs from Canada, in that; your 10 hours must include 8 consecutive hours of Sleeper Birth time.
http://lenduboistrucking.com/blog/trucking-hours-of-service-basics/

At highway speeds (55mph) a 11 hour shift can mean over 600 miles of driving. This new truck has a 200 mile range and can refill quickly.

Good, this is the idea of the Nikola One.
Finally somebody is making sense instead of delaying and babbling.

@sd,
There are 3 categories of Drayage operations at the Port of Long Beach (ref: "Characterization of Drayage Truck Duty Cycles at the Port of Long Beach and Port of Los Angeles");
1. Near-dock Operation (very short cargo moves from 2 to 6 miles in length).
2. Local Operation: Warehouses and truck terminals, and a major rail yard (Hobart) that exist within 20 miles of the ports.
3. Regional Operation: At distances greater than twenty miles from the ports, large warehouse facilities used to transfer goods for interstate delivery.
The Orange BEV would be used for the first category, possibly Category 2.

The Toyota FCEV is planned for Category 3. According to Toyota, the goal is for the truck, laden with cargo, to make regular round trips between the port and warehouse facilities up to 70 miles away (ref: https://www.trucks.com/2017/04/19/toyota-project-portal-fuel-cell-truck/).
Toyota’s test truck is a Kenworth T660 chassis with the standard sleeper compartment converted into a custom aluminum shell housing a quartet of high-pressure hydrogen tanks and a pair of 6-kilowatt-hour lithium-ion batteries.
Class 8 Trucks seem to be a good area for FCEV where there is a need for long range, short refueling time, and require only a limited hydrogen fueling infrastructure (for this project all refueling will be done at the Port of Long Beach). Also, In California, heavy-duty vehicles — including big rigs, buses, delivery trucks and port-based drayage vehicles — account for more than 30 percent of the state’s smog-causing nitrogen oxide emissions and FCEV can definitely help in this area.

A hand to Toyota again.

There is a lot of cargo going from Long Beach, CA to Ontario, CA each day, the ships come in the freight goes to warehouses. Right now diesel trucks are bumping in low gears through traffic, with this they can be computer assisted reducing driver stress, no gears.

Seeing as how this is really an electric vehicle with all the advantages of good low-end torque, etc, it makes sense as an interim measure until we see what the Tesla Semi is all about.

Please anything but a dirty diesel.

I don't think any maker could go full on BEV semi for long haul(weight, cost, and size restrictions), so a hybrid makes the most sense.

I would argue that modern diesels (within the last 5 years) are probably the cleanest thing on the road in the US if they are operating correctly(as far as ice). ( I won't vouge for the thousands of VWs at pikes peak international raceway.)

If you can pull 80,000lbs and still get 6-8mpg I think that is pretty good. By comparison it makes most passenger vehicles seem wasteful.

Older/defunct vehicles are the problem. Most modern vehicles will clean the air in heavily polluted areas.

FC trucks are going to arrive quickly enough. If there is room in the mix for fleets to save money they will jump at the chance.

Again, the way I see it, BEVs will fill in small to large, FCEVs will work their way down from large to small. They will meet somewhere in the middle with some overlap.

@88:
I agree; makes good sense to use hybrids...But, the heat engine(diesel) requires a exhaust particle filter to be truly effective; actually no ICE, running any form of fossil fuel, makes sense when you consider an EV from a clean air, water and land standpoint. Battery electric is a good alternative to fossil fuels and we need to solve the problems and implement their use ASAP and wherever it can be used.

I've been driving an EV for six years now(Leaf, #669) and no way would I go back to an ICE car. To me they are all obsolete.

There was a most polluted cities study published, many had major particulate pollution from diesel engines.
http://www.cbsnews.com/pictures/air-pollution-worst-us-cities/
Obviously trucks running fuel cells would eliminate this.

An update on my previous post.
1. BYD (which has a facility in Lancaster, CA) was awarded $9 million by the State of California for 27 electric trucks: 23 battery-electric 80,000-pound (GVWR) Class 8 yard trucks, also known as “yard goats,” to move heavy freight containers short distances within freight yards, warehouses, distribution centers and port terminals, i.e. Category 1.
Also, four 16,100-pound (GVWR) Class 5 medium-duty service trucks. BNSF Railway will operate the trucks at two of its intermodal rail yards.
2. Local Operation: Warehouses and truck terminals, and the major rail yard (Hobart) that exist within 20 miles of the Port of Long Beach have some "High Speed Transient" sections, i.e. speeds in excess of 26 MPH. So the Toyota FCEV would also be used for this category as well.

So, both BEV and FCEV trucks will help California reduce Diesel pollution.

Another fairytale project from Toyota. Shame on them for not being serious about sustainability. Toyota sells less than 1000 zero emission vehicles per year. Tesla sells over 100,000 per year.

Musk tweeted that Tesla will reveal their zero emission BEV semi for long-haul heavy duty by September this year. That will be interesting because it is not a fairytale. BEV semis will not even need a driver cabin because they will be driverless. And range does not matter as the unmanned BEV semi has no problem waiting to charge every hour or so (every 100 miles, 24/7). The first BEV semi, however, may get a cabin because the autopilot system needs to be developed based on driver inputs from a human driver at first.

I am going to continue to rely on proper engineering from a properly capitalised company with realistic objectives.

At the system level a hydrogen fuel cell system is far more energy dense than any battery we have, and Toyota still sensibly limit their objective to ~200 miles of range.

You prefer fantasies from the Tweetmeister.

This will go the way of battery swapping.

Tesla tried battery swapping, no go.
Reforming HPR diesel to hydrogen would produce 1000 mile range. Liquid hydrogen could produce a 400 mile range, since these are fleet trucks fueling is not a problem. Lots of negative comments about fuel cells, but they have the range in these applications.

I would prefer testing CNG or DME powetrains. May be they should by hybrid. But hydrogen is total nonsense. Energy density is OK but overal process efficiency (coal or natural gas to wheels) is awfull. What a waste of energy and resources!

P.S.
Misleading video. Good acceleration is due to powerfull enough battery but not fuel cells.

They could reform CNG or DME, CNG is 3000 psi DME is 300. Still liquid gives you the most energy density and hydrogen from that gives the highest efficiency with no particulates nor NOx.

Charging a heavy e-truck during 30+ minutes every hour will greatly reduce effective running time and will require about 50+% more trucks and drivers.

An extended range (1000+ Km) hybrid with FCs could be a better solution?

A battery/FC hybrid semi is one solution. Another would be to electrify the highways; http://www.citylab.com/tech/2014/09/los-angeles-is-building-an-e-highway/380914/

A battery/FC/cable trybrid semi would have all the bases covered.