Russia-based SCF Group (Sovcomflot) recently signed an agreement with Shell Western LNG B.V. for the supply of liquefied natural gas (LNG) to fuel the first Aframax crude oil tankers in the world to be powered by LNG. 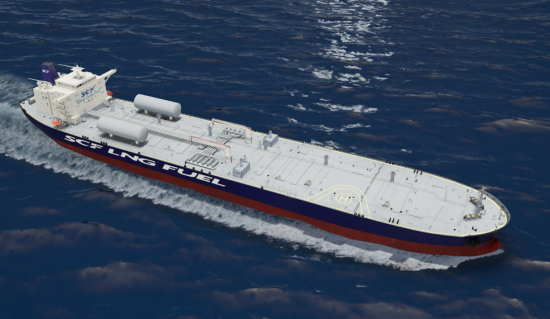 The agreement calls for Shell to provide the LNG fuel for the new generation of SCF Group’s 114,000 deadweight ice-classed Aframax tankers that are scheduled to come into operation beginning in Q3 2018. They will be the first LNG-fuelled Aframax tankers and will operate primarily between the Baltic and Northern Europe transporting crude oil and petroleum products.

Shell will fuel the vessels from a specialized LNG bunker vessel at the Gas Access to Europe (GATE) terminal in Rotterdam, the Netherlands and other supply points in the Baltic. Each LNG-fuelled tanker will have an ice class 1A hull enabling year-round export operations from the Russian Baltic.

This is an important next step for gas as part of the energy mix. The decision to work with SCF Group to power the world’s first LNG-fuelled Aframax crude oil tankers is evidence of Shell’s commitment to LNG as a transport fuel. LNG will increasingly play a larger role in helping the shipping industry meet new emissions regulations.

The signing of this milestone agreement marks the fulfilment of an MOU signed between Shell and SCF in September 2015 to develop Marine LNG fuelling for large-capacity tankers.

Engines running on LNG release more than 90% less SOx, more than 80% less NOx and more than 15% less CO2 than engines burning standard marine fuels. In addition, the selection of the low pressure X-DF dual fuel engine for these tankers will minimize particulate matter emissions. Further, the engines will be fitted with Selective Catalytic Reduction (SCR) technology to comply with Tier III regulations governing NOx emissions when in fuel mode.

The concept for these tankers was developed jointly by technical specialists from SCF Group and shipbuilders, including the Far Eastern Shipbuilding and Ship Repair Centre and Hyundai Heavy Industries (HHI), the technology partners of Zvezda shipbuilding complex (Primorsky region of the Russian Far East). The concept was developed as part of the preparation for the construction of such vessels at Zvezda. It is envisaged that by 2021 the construction of such large-capacity tankers will commence at Zvezda.