Toyota’s Project Portal is designing a heavy-duty hydrogen fuel cell system for class 8 truck use at the Ports of Los Angeles and Long Beach. (Earlier post.) Ricardo provided technical assistance to the project, including areas of design, vehicle build, testing and development, and is currently supporting vehicle trials.

Project Portal is the next step in Toyota’s effort to broaden the application of zero-emission fuel cell technology that can serve a range of industries. It is a fully functional heavy-duty Class 8 truck with adequate power and torque capacity to conduct port drayage operations while emitting nothing but water vapor. Heavy duty vehicles make up a significant percentage of the annual emissions output at the San Pedro Bay ports, and the Portal feasibility study may provide another path to further reduce emissions. 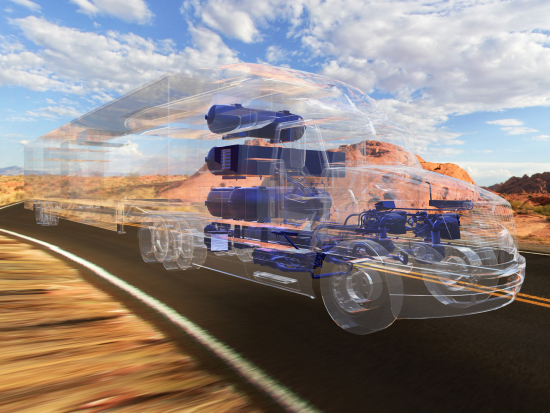 Ricardo has assisted Toyota on this project across a wide range of engineering functions. These have included systems integration and packaging, including the fuel cells, power electronics, hydrogen tanks, cooling systems, batteries, electric motors and transmission.

Many of the ancillary systems that are traditionally driven by the engine were also electrified, including the air compressor, power steering and HVAC system, the controls of which required integration into the vehicle’s J1939 CAN BUS. 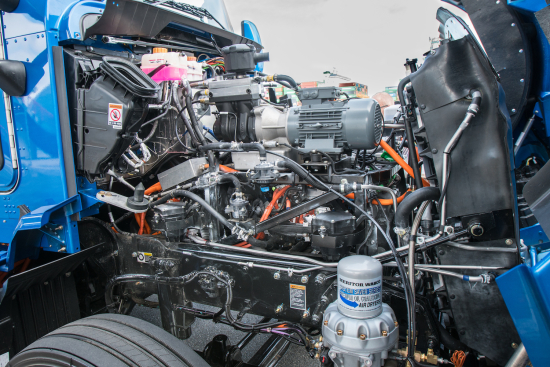 The Project Portal platform is designed to provide the target performance required to support port drayage operations. The truck generates more than 670 horsepower and 1325 lb-ft (1796 N·m) of torque from two Mirai fuel cell stacks and a 12kWh battery—a relatively small battery to support class 8 load operations. The concept’s gross combined weight capacity is 80,000 lbs., and its estimated driving range is more than 200 miles per fill, under normal drayage operation.

Ricardo was honored to collaborate with Toyota on this high profile fuel cell demonstration project. Heavy duty trucks are generally not amenable to the types of electrification used for passenger cars and other light duty vehicles, due to the size and cost of the required battery systems. For this reason, Project Portal provides an exciting opportunity to evaluate a further, practical option for a heavy truck ZEV application. We look forward to working with Toyota in the completion of the in-port trials, and to seeing the results of the project which, I believe, may well inform the future vision of heavy duty transportation.

BS GreenWashing. There's at least half dozen electric drayage trucks out there.

I disagree. If you read the last sentence of Brockbank's comment, you'll see a clue.

With current battery technology, long haul trucking is not likely to be a reasonably application for battery electric. maybe this will change if lithium air batteries become practical. (I will have to wait and see what Tesla has in mind).

They are talking FC hybrid long haul with some batteries, NOT EV long haul. When they reform HPR they can run 1000 miles.

U S Hybrid is also making progress with its heavy duty fuel cell based drayage solutions:

The compact and high efficiency FCe™80 and FCe™40 units have been designed to be integrated, controlled, and serviced just like a conventional engine with J1939 diagnostics and easy access to critical components to minimize service time. The FC engines are utilizing US Hybrid's unique advanced freeze capable technology, which enables start at temperatures as low as -30 degrees Celsius without a cold climate option package.

USFC anticipates production and delivery of more than 1,200 PEM fuel cell engines in the next 36 months. The expansion of production facilities in US and China will enable the company to build and deliver 2,000 fuel cell engines per year in the US and additional 2,000 engines in China. The higher-volume fuel cell engine production capability will enable fleets to realize a comparable return on investment as other clean fuel engines.'
https://fuelcellsworks.com/news/us-hybrid-announces-china-fuel-cell-joint-venture-and-unveils-class-8-fuel-cell-port-drayage-truck-f/

Since the hydrogen infrastructure is not an issue in the application as it can be installed at the depot, and the total weight is way less than a battery only solution, they can be refuelled in 9 minutes, do not suffer the drastic range reduction batteries do in the cold, and actively clean the air including particulates from tire wear etc in their filtration system which battery only solutions don't, I can only conclude that the opposition to using them rather than batteries is more in the way of a quasi religious objection rather than one founded in the science and the numbers.