US Hybrid has unveiled a zero-emission Class 8 fuel cell port drayage truck featuring its PEM fuel cell system during the Advanced Clean Transportation (ACT) Expo at the Long Beach Convention Center. The truck, which will be operated by Total Transportation Solutions, Inc (TTSI), is one of two fuel cell demonstration tractors scheduled for delivery at the Ports of Los Angeles and Long Beach. (Earlier post.)

The fuel cell tractor, a Navistar International ProStar day cab, features US Hybrid’s FCe80, 80 kW PEM fuel cell system and a 500 hp traction motor with 2,900 lb-ft of direct drive torque (3,750 N·m). It has a gross vehicle weight rating of 80,000 pounds, an estimated driving range of 200 miles under normal drayage operation, and can be fully refueled in less than nine minutes. 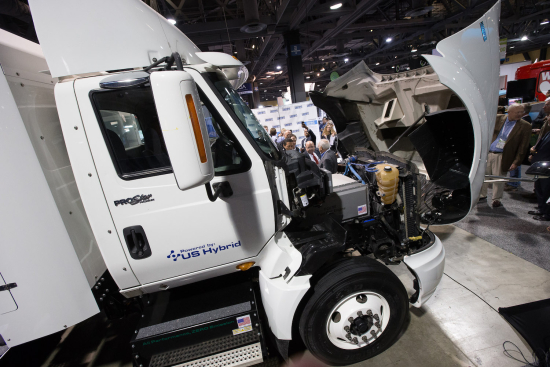 US Hybrid plans to expand its Connecticut production facility via an expanded partnership with China-based Jiangsu Dewei Advanced Materials. The US FuelCell, Inc. (USFC) facility—originally a wholly owned subsidiary of US Hybrid, but now owned by both Dewei and US Hybrid—will focus on the production of US Hybrid’s PEM fuel cell systems, including the FCe80, an 80kW fuel cell engine for heavy-duty trucks and transit buses, and the FCe40, an 40kW fuel cell engine for class 6 and 7 trucks and medium-duty transit buses. (Dewei also has a small equity investment in US Hybrid.)

The compact and high efficiency FCe80 and FCe40 units have been designed to be integrated, controlled, and serviced just like a conventional engine with J1939 diagnostics and easy access to critical components to minimize service time. The FC engines are utilizing US Hybrid’s advanced freeze capable technology, which enables start at temperatures as low as -30 degrees Celsius without a cold climate option package.

The higher-volume fuel cell engine production capability will enable fleets to realize a comparable return on investment as other clean fuel engines.

Dewei is committed to the successful development of fuel cell technology for commercial buses and trucks, as evidenced by our $42.8 million (RMB 300 million) investment in Chinese fuel cell production and establishment of a $428 million (RMB 3000 million) industrial fund. This new partnership with US Hybrid will enable US FuelCell to meet market demand cost-competitively in China, North America, and Europe.

US Hybrid Corporation has provided electric and hybrid-traction drive systems for medium- and heavy-duty commercial trucks, municipality vehicles, and fuel cell transit buses throughout the world, with more than one million accumulated kilometers of operation.

Dewei, established in 1995, is the largest high molecular material producer and distributor in China. The rapidly growing company, which is a supplier for General Motors, Volkswagen and Toyota, and a key shareholder of Guizhou Aerospace Special Vehicle Co., has recently experienced nearly 30% year-over-year revenue increases.

I had not noticed this article when I linked this info in the Toyota one.
Apologies.

'The FC engines are utilizing US Hybrid’s advanced freeze capable technology, which enables start at temperatures as low as -30 degrees Celsius without a cold climate option package.'

Very important for a lot of places in the US.

I do not know the economics but from Proterra's cost projections showing that the battery electric transit buses are simply cheaper to own than diesel buses, I am guessing that battery electric trucks would be cheaper than fuel cell plus battery although the required battery is much less.

The fuel cell trucks may be emission free but the hydrogen generation is not. Most hydrogen is reformed from natural gas. Even if it is generated from renewable electric sources, this is electric power taken from the grid that must be replaced but other power including coal fired plants that I live down wind from.

For drayage you can use either fuel cells or batteries, and BYD already build battery solutions.

And of course electricity is not produced all from renewables.

It will come down to cost and convenience.

It is easy to fill a hydrogen truck, not so a battery one if the day is more demanding than usual.

And in cold climates the battery solution is hard hit when the temperature drops.

Dave,
Have you explored the Li cold running influence that you can share?

What do we know about cold weather influences on Li batteries?

My understanding is lacking as it is not relevant in warmer climates but there seems a lot of concern that needs clarifying.

My understanding derived from a mix of sources and reason is along the lines that the Li battery has ~ 30% performance reduction @ lower temps below ~ -5o C.

That at least one manufacture produces a 'kickstarter' self heating Li battery that directs a percentage of charge to initiate internal self heating .
One commenter suggested that only a single cell or pack was needed to start the process and tickle(heat) the rest. Once the battery was discharging, internal resistance would normalise it's output.
Once the battery temp is up, there should be no loss of power or capacity.\

Specifications for Li starter battery shows I out Amps goes up during starting as the internal resistance heats as opposed to Pb where there is constant reduction of output for the duration.

I understand internal resistance will cause a heating effect in use as demonstrated by the need for good air or liquid cooling.

That leaves me wondering why there should be any loss of performance or range and I liken that to I.C.E. that needs enrichment and produces lower power during warm up.

But we read from many sources (without clear explanation I.M.O.)of reduced performance in cold climates.
If anyone has practical real world knowledge to share would be good.

Googling threw up these links, which seem to give a pretty fair summation:

This Tesla owner says that preheating and the liquid cooling system on them reduces range losses to minimal levels, which is news to me but sounds as though it would work.

OTOH there is considerable talk about Tesla's in Norway in cold weather being driven very slowly to reduce consumption, but perhaps if true they are simply being cautious or have a considerable distance to travel or something.

Of course the fuel stack in an FCEV does exactly the same thing with the right engineering which AFAIK they all have using the stack waste heat.

Your question made me learn something, so good one!

I forgot the link for the Tesla owner.
Here:
https://www.quora.com/What-effect-does-cold-weather-have-on-the-battery-life-of-a-Tesla-Model-S

Seems that cold is a consideration but a long way from the often stated range disaster scenario.
I can understand though that occupants don't like the idea of frostbite. A good fit for insulation and double glazing?

In a properly designed integrated and evolved product, there could be little need for resistive or heatpump heaters.

Just between us, I'm old enough to remember 12V 1/2 kW resistive wire beehive style accessory heaters for cars which were also dumping 10's of kilowatts out through the radiator. Those days fan blown engine heat exchangers and ducting were less common.

From your battery university link:

Li ion batteries offer reasonably good charging performance at cooler temperatures and allow fast-charging in a temperature bandwidth of 5 to 45°C (41 to 113°F). Below 5°C, the charge current should be reduced, and no charging is permitted at freezing temperatures. During charge, the internal cell resistance causes a slight temperature rise that compensates for some of the cold. The internal resistance of all batteries rises when cold.

Many battery users are unaware that consumer-grade lithium-ion batteries cannot be charged below 0°C (32°F). Although the pack appears to be charging normally, plating of metallic lithium can occur on the anode during a sub-freezing charge. This is permanent and cannot be removed with cycling. Batteries with lithium plating are more vulnerable to failure if exposed to vibration or other stressful conditions. Advanced chargers (Cadex) prevent charging Li-ion below freezing.

Advancements are being made to charge Li-ion below freezing temperatures. Charging is indeed possible with most lithium-ion cells but only at very low currents. According to research papers, the allowable charge rate at –30°C (–22°F) is 0.02C. At this low current, the charge time would stretch to over 50 hours, a time that is deemed impractical. There are, however, specialty Li-ions that can charge down to –10°C (14°F) at a reduced rate.

Cold weather certainly impacts the range on many (most?) EVs.

There are workarounds of course, but the question is what they cost to implement.

The Tesla is a premium electric vehicle, and can afford fancy thermal management and so on.

I their last conference call when asked about battery costs and why the Powerwall II costs far more per kwh than their guidance would seem to indicate, Tesla talked about many of the costs being in the battery other than the cell:

Yes, thank you. I was wondering if you could maybe give us an update qualitatively or quantitatively, on how investors should think about battery costs. I think your last public statement was that Tesla's battery cost early last year was under $190 per kilowatt hour. If we look at Powerwall 2, there's been significant improvement in cost per kilowatt and in density, but I think if we try to do the math on Powerwall 2, we still come up with a number that's reasonably high. So maybe you can help us. I think in the past, Elon, you've said that you hope to get to $100 per kilowatt hour by 2020, and I recognize that's aspirational, but maybe you can help us a little bit frame how we should think about battery cost today. What kind of improvement you're seeing from, or expect to see with 2170 batteries in vehicles going forward?

Well, I mean, regarding numbers for classical RFC (9:30) closely held competitive information. It's just that we do expect to see significant improvements year-over-year as much as improving the core chemistry of the cell, reducing potentially the cell mass that is inactive, and of course, mass economies of scale and vertical integration at the Gigafactory. These will all take time and effort, but there will be significant time. Now with the Powerwall, there are a bunch of other costs in the Powerwall that are more than just the batteries. So, you have the cell cost and then you have to turn the cell into a module. You have all the cooling systems, the control systems, the safety stuff which prevents cell run away, the enclosure, the modem to communicate to data, and then (10:42) maybe power electronics to take the power from the cells and convert that to AC or DC power that the house can use. JB, something you'd like to add to that?'

That applies pretty well to car batteries too , especially ones with sophisticated thermal management IMO.

I think a lot of people have got themselves pretty confused between cell costs and costs at the pack level.

So why not use a fuel cell, and have at least the source of the heat to keep the battery at the right temperature sorted?

80,000 pounds, an estimated driving range of 200 miles...can be fully refueled in less than nine minutes.