Under the EU6 standard, diesel engines are still allowed to emit up to 80 mg NOx/km milligrams of nitrogen oxides per kilometer—not only under the legal framework in the cycle but also in respect of increasingly tighter RDE requirements. Future diesel powertrains will need to be capable of meeting limit values that are even tighter than EU6. 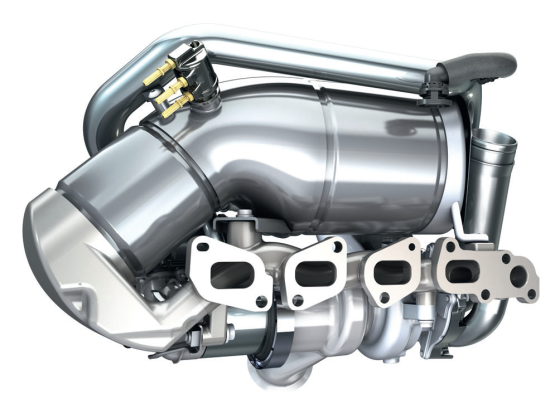 A key contribution to this performance must come from the exhaust gas aftertreatment system—across the entire speed and load range. The temperatures in the oxidation catalyst (DOC) as well as in the combined diesel particulate filter and SCR catalyst (SCRF) play a crucial part in this regard. The sooner they reach their optimum operating temperature and the better they maintain it, the quicker and more reliably emissions fall.

In modern charged engines, however, exhaust gas aftertreatment (EAT) competes with the turbocharger for heat in the exhaust gas flow. Normally its turbine is positioned upstream of EAT so that exhaust gas temperature drops by 100 to 150 kelvins (100 to 150 degrees C) before it reaches the DOC and SCRF.

IAV’s developers moved the EAT system closer to the engine—specifically, the turbocharger and EAT swap places. This way, exhaust gas flows through DOC and SCRF before it enters the turbine. These measures produce significant improvements.

On cold starting and while running at low load, the components of the EAT warm up far more quickly or are kept at a higher temperature. After a cold start, for example, it only takes a few seconds before the vehicle’s emissions are in the admissible range.

Changing the position of turbocharger and EAT alone reduces NOx emission at low load to about a fifth of the level from a conventional EU6 vehicle.

However, the emission benefit also comes with a downside. To begin with, small particles from the DOC can damage the turbocharger’s turbine—endurance tests need to show what kind of a problem this actually is. Then, after starting, the turbocharger is initially deprived of the energy that is first used to get the EAT system to its operating temperature.

Driving dynamics are inadequate when the engine is cold, which means corrective action is needed to improve it. In a hybridized powertrain, the e-motor can contribute to the torque needed. Otherwise, an electric compressor could also do this job.

Whatever the case, one of the two will become necessary if an OEM goes for the “EAT upstream of turbocharger” option.

Such a solution is not the only way of moving EAT closer to the engine. In a concept study, IAV’s experts examined several topologies and compared the effects they bring about. One of the alternatives they looked at involves leaving the EAT system in its original place and bypassing the turbocharger on cold starting until the DOC and SCRF are at operating temperature. This gets the EAT system to operating temperature more quickly without the drawbacks of an upstream-of-turbocharger arrangement. Integrating an additional DOC into this bypass is also conceivable.

It makes HC/CO light-off faster and speeds up NO2 production after cold starting. This has a positive effect on conversion in the SCRF at low exhaust gas temperatures.

A further option is to position the DOC upstream and the SCRF downstream of the turbocharger.

In future, this close-coupled setup makes it possible to operate the EAT system in diesel engines with an equally high level of efficiency as gasoline engines in all conceivable driving situations. The results of the concept study derive from measurements made on a 2.0-liter 4-cylinder diesel engine and simulations. The approach is suitable for all vehicle classes from the C-segment upwards, and could go into production relatively quickly.

The problem could be bypassed completely if they'd implement an electrically driven turbocharger.

yoatmon: They are working on it. Easy with 48 V architucture. 48 V systems will be assembled soon in all ICE driven cars.
Above written is very cheap option for non 48 V applications. With pre-heating, small supporting motor-alternator, electric turbo and de-Nox systém laying close to the exhaust I see no limits for exhaust gast improvements. Expensive for small cars but cost-realistic for mid-class and SUV/pick-ups.

There's another way of reducing diesel emissions - propane or natural gas injection. The gaseous fuel is introduced into each cylinder of the engine during the intake stroke. During the compression stroke of the piston, the pressure and temperature of the mixture are increased in the conventional manner. Near the end of the compression stroke, a smaller than normal quantity of diesel fuel from the engine's existing diesel fuel injection system is injected into the cylinder. The diesel ignites due to compression and in turn ignites the mixture of gaseous-fuel and intake air, which in turn, accelerates the flame front of the Diesel Fuel, enhancing the combustion process which reduces particulates. In addition, because less diesel is used and propane burns cooler, lower combustion temperatures produce fewer NOX.

One day, this company stand at the top. Because of its inventions. Their products are so amazing and very well in the working and the design. But they also can use the propane to reducing the leakage of the diesel. I visited https://topicsmill.com/capstone-project/ source to know about capstone project which is pretty good for me.