Half-bridge circuits are the centerpiece of many voltage converters. Fraunhofer Institute for Applied Solid State Physics IAF has now produced and demonstrated the world’s first monolithically integrated GaN half bridge for the important 600 volt class. In power electronics components, this is the standard volt class for grid-connected electrical devices, ranging from tablets and washing machines to e-bikes and electric cars.

Monolithic integration combines several components on a single GaN chip, enabling extremely small, powerful systems to be created. Besides being very compact, monolithically integrated half-bridge circuits have significantly better electronic properties. For example, the switching frequency can be improved by a factor of around 10 in comparison with conventional voltage converters. 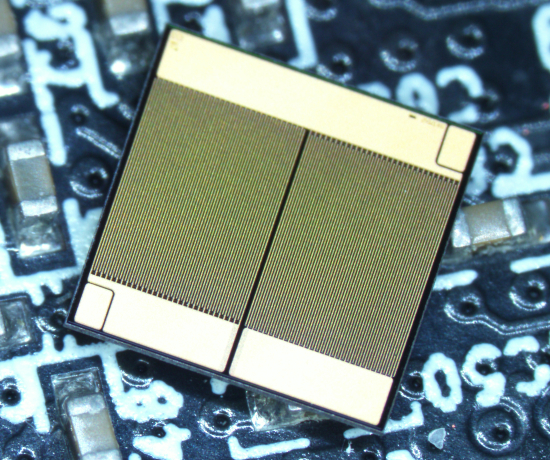 A switching frequency of up to 3 MHz allows us to achieve a much greater power density. This is very important in areas such as e-mobility, where many converters which are as efficient as possible have to be fitted in very little space.

Monolithically integrated half bridges are more compact, are easier to assemble and improve reliability.

A folded chip layout enables the DC link capacitance to be tightly connected between the supply voltage and ground. This design creates an optimized power path and allows for clean, stable switching at high frequencies. The operation of this circuit was demonstrated at the 4th IEEE Workshop on Wide Bandgap Power Devices and Applications (WiPDA) in a down converter from 400 to 200 volts at a switching frequency of 3 MHz.

Even more complex circuits, such as a monolithically integrated multilevel inverter, have already been produced using this GaN-on-Si technology. In this topology, ten GaN power devices are placed on one chip with an area of 2 x 3 mm2. Each switch has a breakdown voltage of 400 volts in off state and a resistance of 350 mΩ in on state.

Compared with conventional converters, multilevel inverters generate less noise during DC/AC conversion. This means that they require smaller output filters. Monolithic integration therefore not only reduces costs, but also makes voltage converters more compact and lightweight. This converter was demonstrated in inverters operating at the grid voltage level used in the US (120 volts).

Covering long distances without generating any emissions requires not only powerful batteries but also the development of lightweight electric cars which generate as little energy as possible. This can only be accomplished using electronic components based on semiconductor materials such as gallium nitride (GaN), which in contrast to silicon carbide (SiC) can be grown as epitaxial layer on cost-effective, large area silicon substrates. When used to produce electronic components for electric vehicles, GaN enables higher power densities to be achieved more energy efficiently. The aim of car manufacturers and users is to develop extremely efficient on-board chargers for electric vehicles which take up as little space as possible.

Their compact design minimizes negative influences such as line impedances, improving the electrical switching characteristics. The integration of additional sensor technology, such as a thermal monitoring system, improves operation even further.

Fraunhofer IAF is presenting its monolithically integrated half-bridge circuit at PCIM Europe in Nuremberg, 16-18 May 2017.