Qualcomm Technologies also demonstrated simultaneous charging, in which two vehicles on the same track can charge dynamically at the same time. The vehicles can pick up charge in both directions along the track, and in reverse, further showcasing how the Qualcomm Halo DEVC system has been designed to support real-world implementation of dynamic charging.

The dynamic charging demonstrations took place at the 100-meter FABRIC (FeAsiBility analysis and development of on-Road chargIng solutions for future electriC vehicles) test track, which has been built by VEDECOM at Satory Versailles. 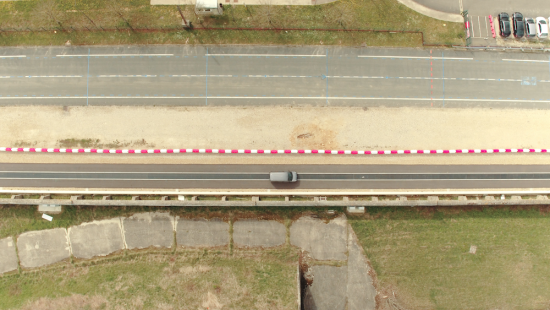 VEDECOM was created in February 2014 and is an Institute for Energy Transition (ITE) established as part of the French government’s ‘Investment for the future plan’ (Programme d’Investissements d’Avenir or PIA). The Institute is dedicated to individual, carbon-free and sustainable mobility.

Qualcomm Technologies and VEDECOM integrated the source part of the Qualcomm Halo DEVC system in the test track, while VEDECOM and Renault integrated the receiving part onto two Renault Kangoo vehicles. 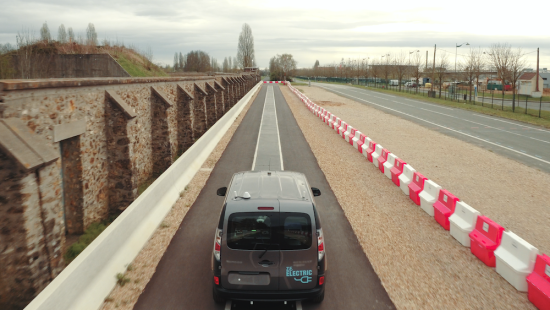 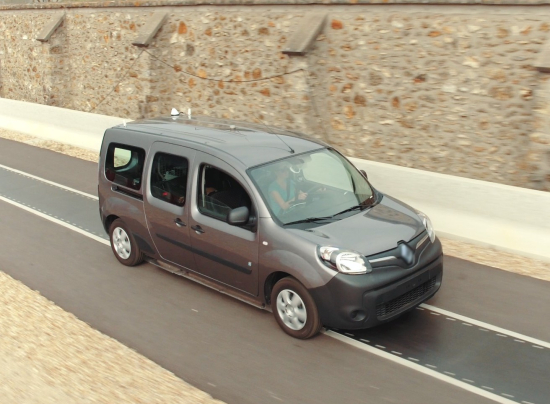 Following the demonstration, the Qualcomm Halo DEVC system was handed over to VEDECOM to perform tests for FABRIC. These tests will evaluate the operation, safety and efficiency of energy transfer to the vehicles for a wide range of practical scenarios including vehicle identification and authorization on entering track, power level agreement between track and vehicle, speed and alignment of vehicle along track.

The project began in January 2014 and will continue through December 2017, and is being undertaken by a consortium of 25 organizations from nine European countries, including automotive manufacturers, suppliers, service providers and research organizations from automotive, road and energy infrastructure domains.

VEDECOM is one of the FABRIC collaborators and responsible for providing the demonstration of the charging solution at Satory using the Qualcomm Halo DEVC system. FABRIC’s main goal is to conduct feasibility analysis of wireless DEVC as a means of EV range extension.

Qualcomm Halo envisages a transport system in which licensed operators build out the Dynamic Charging network in a similar way to which wireless communications networks have been deployed. DEVC technology would be integrated into one or more lanes of main roads and highways and DEVC drivers would drive and charge at the same time.

You wouldn't want to be "electrosensitive" with that near you.

They have pay lanes and carpool lanes, I suppose EV lanes could happen. You would have to charge a high fee to pay for it.

@sjc, it would certainly cost a lot.
However, I imagine they would make it free, or nominal electricity cost (say $0.11/KwH) or else no-one would use it.
You would want a loan at a VERY low interest rate to pay for something like this.

It seems like they need at least 10 miles to start to make it worth while. At $2 million per lane mile that would be $40-50 million. If it is for EVs only low utilization can happen, if it is for all cars then you have to sense EVs and turn on that segment as it passes to save energy.

The big thing that this sort of system has going for it is that electric trucks can be powered, as their length means that they can have many charging pads.

I would see that as the prime driver, with electric cars along for the ride.

Electric delivery trucks sounds like a good idea, sort of a range extender for them.

We can do electric/fuel cell delivery trucks already without on the move charging.

Check out this fairly substantial one from Renault, the Maxity H2:
https://fuelcellsworks.com/news/the-maxity-h2-the-first-french-utility-100-electric-hydrogen/

And Toyota and others are designing Class 8 short range delivery trucks with combinations of batteries and fuel cells.

What we can't do with any reasonable economy and drastically reducing the payload is long range Class 8.

On the move charging would put that within reach, supplemented by batteries probably rather than fuel cells for the uphill bits and acceleration.

It strikes me that the first thing you need is an EU (or USA) wide standard for this. A global standard would be even better.
It will certainly cost a lot, but it can be rolled out bit by bit. It does not need to be continuous as the vehicles using it will have batteries and so can hop over non charging sections.

I wonder how it would work with a lot of cars and trucks on it ?

Interesting, however, as it would solve the "big battery" problem for compatible cars. If you had this, you could get by with 20-25 KwH batteries which would make the cars lighter and cheaper.

Something using 20,000 watts every 50 feet for 20 miles both ways would take 100 megawatts, dedicating a power plant is asking a lot.

From a CO2 point of view, it very much depends on where your power is coming from.
If it is from coal, you would be better off using hybrids, if from renewables or nuclear, you are better off using the electricity.

If you take a Prius at 158 gms / mile*, you can just about beat the Ireland mix / nat gas generation.

From a local pollution point of view, you will be much better off.
The main thing with local pollution is to prevent it building up in cities and towns, and for this to happen, you need more people in electrics (or out of diesels anyhow), so making electric cars work better on long runs should make more people buy them, etc.

Sorry about the formatting. It looked OK in the box

If you want to payback the expense soon you platoon the cars and trucks. Trucks will have several pads so take more energy. Even at 50 megawatts that is 50,000 homes for one small length of highway.

@SJC: platooning should make it better as the power requirements will be reduced by (say) 20%. This will need ADAS systems, but not full autonomy, just V2V standards.

Platooning should not put more cars on the roads, it should just bunch them together, so the overall energy requirements should go down, assuming the number of cars on the roads does not change.

Thinking about this, people would pay quite a bit to use it, say 2x the normal price of electricity - as long as it is cheaper than fossil fuels. Being able to do a long run and arrive with an almost full battery would be a very attractive proposition.
You could also make the price flexible so it matches the current wholesale price hour by hour. This would encourage truckers to go when the wind was blowing (or the sun shining).

Usage fees would have to be high enough to recover all ongoing operation cost and 8% to 10% of initial cost.

The total end user cost may not be that much lower than current hybrid units but less pollution may be created.

Secondly, the first few years would be short of enough users to recover cost.

All weather extended range FCEVs could be a better all around solution?