Linde and Praxair to merge; global industrial gas major valued at > $70B

Linde AG and Praxair, Inc. have entered into a definitive business combination agreement (BCA) to come together under a new holding company through an all-stock merger-of-equals transaction. Linde and Praxair expect the transaction to close in the second half of 2018, subject to customary closing conditions, including regulatory approvals.

The proposed merger brings together two leading companies in the global industrial gas industry, leveraging the proven strengths of each. Based on 2016 reported results, the combination will create a company with pro forma revenues of approximately US$29 billion (€27 billion), prior to adjustments, potential divestitures and regulatory limitations, and a combined current market value in excess of US$70 billion (€66 billion). 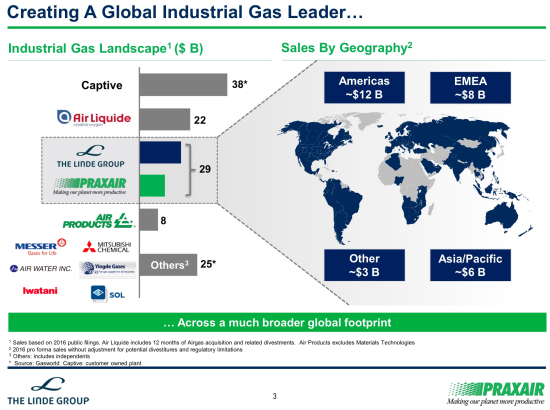 Additionally, the new company will have a robust balance sheet and strong cash flow generation, enabling financial flexibility to invest in future growth.

The merged company is expected to create significant value for shareholders through the realization of approximately US$1.2 billion (€1.1 billion) in annual synergies and cost-reduction programs that are expected to be achieved over a period of approximately three years following closing. These synergies and cost reductions are expected to arise from scale benefits, cost savings, and efficiency improvements from existing cost-reduction programs.

The combined company will have a strong presence in all key geographies and end-markets, which will result in a more diverse and balanced global portfolio as well as increased exposure to long-term macro-economic growth trends.

The new holding company will be incorporated in Ireland while its principal governance activities, including board meetings, will primarily be based in the United Kingdom. The group CEO will be based in Danbury, Connecticut, USA and group corporate functions will be appropriately split between Danbury, Connecticut and Munich, Germany to help achieve efficiencies for the combined group.

The new group will adopt the globally-recognized and respected Linde name.

This JV will create a solid worldwide gas company and foster lower cost clean distributed H2 for future FCEVs of all sizes.