The average fuel economy (window-sticker value) of new vehicles sold in the US in May was 25.3 mpg (9.29 l/100 km)—unchanged from April and the same as a year ago, according to the latest monthly report from Dr. Michael Sivak and Brandon Schoettle at University of Michigan Transportation Research Institute (UMTRI).  The value for May is up 5.2 mpg since October 2007 (the first month of their monitoring), but down 0.2 mpg from the peak of 25.5 mpg reached in August 2014. 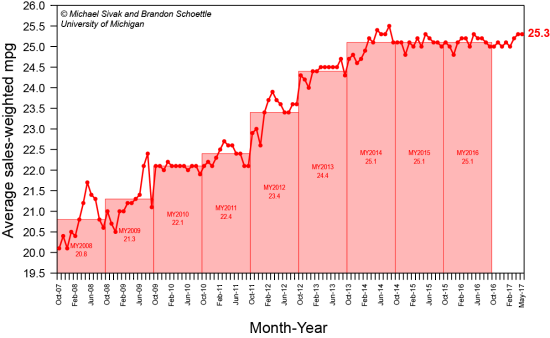 The University of Michigan Eco-Driving Index (EDI)—an index that estimates the average monthly emissions of greenhouse gases generated by an individual US driver—was 0.85 in March 2017, unchanged from the value for February 2017 (the lower the value the better). 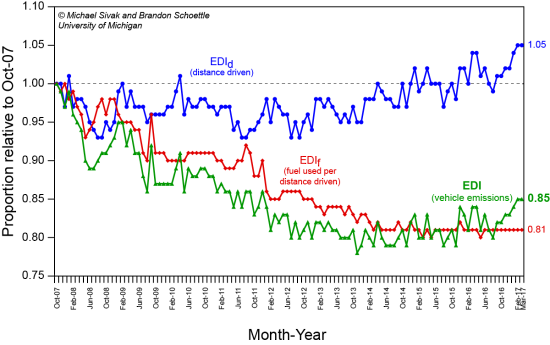 This value indicates that the average new-vehicle driver produced 15% lower emissions in March 2017 than in October 2007, but 7% higher emissions than the record low reached in November 2013.

It is obvious that progress stopped in early 2014, about 4 years before DT arrival!

Of course 'greens' will wrongly still blame him regardless of stats.

Progress on fuel economy depends on price signals.  Those have been trending the wrong way for years.

Yes EP, low cost gasoline and diesel fuel, did not help for the last 4+ years. Too many are buying heavy SUVs. Diesels are not the right answer.

It would be the right time to apply a progressive extra Federal carbon tax but 75+ % would be against it.