Bosch and the Dutch map and traffic information provider TomTom have developed a radar localization layer for high-resolution maps for automated driving—a first. Up to now, video data has been used for this purpose.

Bosch’s “radar road signature” is made up of billions of individual reflection points. These are formed everywhere that radar signals hit—for example, on crash barriers or road signs—and reproduce the course a road takes. Automated vehicles can use the map to determine their exact location in a lane down to a few centimeters. 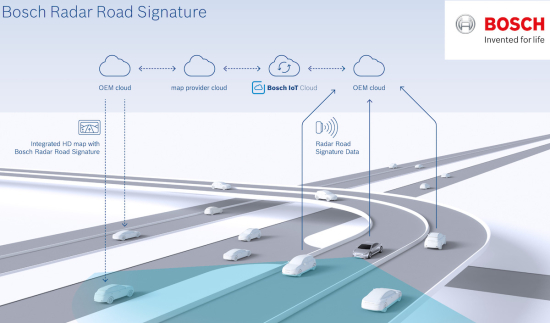 The advantage of Bosch’s radar road signature is its robustness: unlike maps that rely exclusively on video data for vehicle localization, the radar road signature also works reliably at night and in conditions of poor visibility. Moreover, the Bosch radar road signature only transmits five kilobytes of data to a cloud per kilometer—this data volume is twice as high when using a video map. Bosch expects the first vehicles using the technology by 2020 at the latest in Europe and the US.

The two companies have been working intensively on the radar road signature and its integration into TomTom’s high-resolution overall map since the beginning of their collaboration in July 2015.

When used in a driver assistance system such as automatic emergency braking systems or adaptive cruise control (ACC), the sensors detect moving objects. But in order to generate the radar road signature, they also need to be able to detect static objects, which meant that existing radar sensors had to be modified. The next generation of Bosch radar sensors will be able to provide the data required for the radar road signature.

High-resolution maps are essential for automated driving and provide information that goes beyond the area that sensors are able to monitor. Unlike maps for today’s navigation devices, they are made up of a number of overlapping layers:

Each of these layers of a high-resolution map for automated driving need to be regularly updated—the dynamic layer even in real time.

We currently expect that we will need fleets for freeways in Europe, North America, and Asia Pacific that each consist of around one million vehicles in order to keep our high-resolution map up to date.

Current data for each of the layers will be generated by the vehicles’ on-board sensors while they are driving. Communication boxes such as Bosch’s Connectivity Control Unit will transmit the radar sensors’ data from the vehicles to the manufacturers’ cloud and then on to the Bosch IoT Cloud. Bosch will use this to create the radar road signature, which is compatible with all conventional map formats. TomTom’s responsibilities will include integrating the radar road signature in the overall map and distributing it.

This is normally an energy-car website. Why are you printing scam like that , want to sell garbage products to little brain car nerds.