In a large-scale test, researchers at the German Aerospace Center (Deutsches Zentrum für Luft- und Raumfahrt; DLR), together with Lufthansa Technik and the Bundeswehr Research Institute for Materials, Fuels and Lubricants, investigated the chemical and physical properties of particularly promising aviation biofuels. The tests were carried out in a special test rig at Lufthansa Technik.

Real engine testing. An airliner turbine can cost up to several million euro. If it is operated using non-certified fuel for research purposes, it may not be reinstalled in an aircraft. This means that bridging the gap between tests on a laboratory scale to actual implementation in an aircraft represents a huge challenge for researchers.

Scientists at the DLR Institute of Combustion Technology now have the opportunity for the first time to investigate biofuels on a special test rig at Lufthansa Technik in Hamburg, in which a dismounted aero-engine is available especially for research purposes. Using this engine, the scientists examined and compared three different fuels: pure biofuel, a blend consisting of 50% biofuel and 50% conventional fuel, as well as conventional kerosene as a reference.

Over a period of several days, a four-person DLR team first set up the measuring infrastructure required for the tests and then carried out the measurements.

The test engine—a CFM56, used in Airbus and Boeing medium-haul aircraft, for example—is suspended from the ceiling in a hangar. The exhaust gas stream enters a large tunnel behind the engine, where we installed our measuring probes to take samples. A significant challenge here is stability of the probes under these extreme conditions so that they do not simply snap or bend. The laboratory analyzes already showed that biofuels are well suited for use in aero-engines. Testing this under real-life test conditions, however, takes on an entirely different dimension. 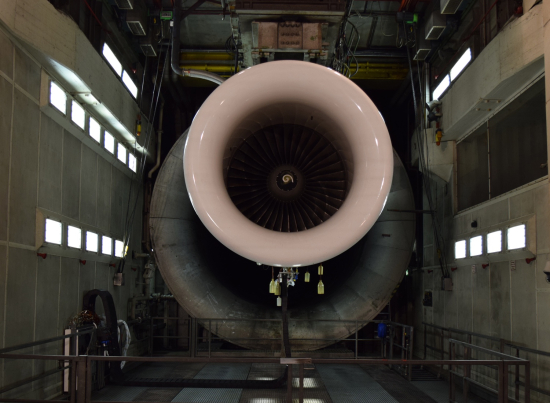 Improved carbon footprint with biofuel blends. The large-scale test showed that the use of blends can improve the carbon footprint in the field of aviation without causing any problems in the engine, summarizes Köhler. Biofuels also offer the potential to reduce the emissions of pollutants in the future, he added.

The certification of a completely new fuel is an elaborate and lengthy process. Blends of biofuels and conventional kerosene represent an important intermediate stage—some of their properties correspond to those of normal kerosene, which means that not all parameters required for the combustion process have to be completely re-examined. They are also an important step toward so-called designer fuels. Such fuels are composed in such a way that their properties are as optimal as possible in terms of environmental friendliness and technical characteristics. Research in this field is a major focus for the DLR Institute of Combustion Technology.

On the path toward designer fuels. The fewer individual components a fuel has, the better and faster the chemical and physical processes that occur during its combustion can be defined. Several hundred substances are present in the Jet-A type kerosene used predominantly in the field of civil aviation.

The combustion analyzes are correspondingly complicated. The aim with designer fuels is therefore to work within a precise range of substances with as few components as possible. In this way, combustion properties can be optimized and polluting emissions reduced. In this context, so-called aromatic compounds are of particular interest. When the proportion of these is reduced or completely eliminated, considerably fewer soot particles arise during combustion. At higher layers of the atmosphere, these soot particles largely enhance the formation of ice crystals, which are visible as contrails, and can persist over several hours and contribute to climate change.