VTT Technical Research Centre of Finland and Lappeenranta University of Technology (LUT) are beginning testing of the Soletair demo plant, which uses air-captured carbon dioxide to produce renewable fuels and chemicals. The pilot plant is coupled to LUT’s solar power plant in Lappeenranta.

The aim of the project is to demonstrate the technical performance of the overall process and produce 200 liters of fuels and other hydrocarbons for research purposes. The demo plant incorporates the entire process chain, and comprises four separate units: a solar power plant; equipment for separating carbon dioxide and water from the air; a section that uses electrolysis to produce hydrogen; and synthesis equipment for producing a crude-oil substitute from carbon dioxide and hydrogen. 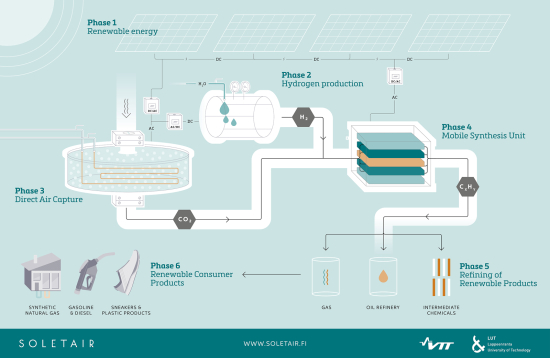 Pilot-scale plant units have been designed for distributed, small-scale production. Production capacity can be increased by adding more units.

The concept we are exploring is an example of how the chemical industry could be electrified in the future. The burning of fossil fuels must end by 2050, but people will continue to need some hydrocarbons.

After the piloting phase, synthesis units will be used in a number of EU projects over the coming years. It will provide a platform for conducting research with international companies.

VTT and LUT have invested €1 million in the equipment. The research is being funded by Tekes and a number of companies: ABB, ENE Solar Systems, Green Energy Finland, Proventia, Hydrocell, Ineratec, Woikoski, Gasum and the Finnish Transport Safety Agency (Trafi).

At 20% efficiency it would take roughly 1000 m² of PV panels to supply that peak power.  That much area would cover roughly one filling station and produce enough fuel to fill 1-2 vehicles... per day.

Renewable gasoline is not going to be a big thing any time soon.  Probably never.

Replace the solar panels with an SMR nuclear plant to provide a much higher capacity and compact source of heat and electricity, then you've got something

Would it be better to grow trees or some plant matter and use that as one of the feedstuffs?
Or just make Ethanol or butanol?

As I said in a previous post, taking CO2 out of the air is a loser's game, growing plant matter would be a better bet.
Maybe build huge grow houses near power stations and pump in the excess Co2 from there to grow the stuff faster.

Problem with fossil power plants is combustion, you end up with combustion products the plants don't like. Better to make fuels, reuse the carbon to reduce emissions.