Researchers at Pacific Northwest National Laboratory, with colleagues from Los Alamos, Sandia and NREL, are working to lower the cost of producing biofuels from algae. The project, called the Development of Integrated Screening, Cultivar Optimization, and Validation Research (DISCOVR), is funded by the Bioenergy Technologies Office (BETO) and has created an integrated screening platform for the rapid discovery of high-productivity strains for resilient, year-round outdoor cultivation via crop rotation.

The DISCOVR project, which started 1 October 2016, is currently in its first phase, and is utilizing PNNL’s Laboratory Environmental Algae Pond Simulator (LEAPS) mini-photobioreactors to cultivate algae indoors, in a controlled environment, while mimicking the frequently shifting water temperatures and lighting conditions that occur in outdoor ponds.

LEAPS executes seasonal light and temperature scripts accurately; its performance has been validated by repeating three outdoor pond experiments for different strains. Biomass productivity in LEAPS was the same as in outdoor ponds.

Under the right conditions, algae could be up to 100 times more productive than cellulosic bioenergy feedstocks. Determining strains of algae that are highly productive could help lower the cost of biofuel production.

The LEAPS system is made up of rows of glass column photobioreactors that mimic small outdoor ponds, allowing researchers to grow different strains of algae simultaneously, while exposing each row to unique temperature and lighting conditions.

Researchers are currently cultivating 30 strains of algae, which they will later narrow down to the four most promising strains. They will study the strains to determine their oil, protein, and carbohydrate content, as well as other factors, such as bacterial resistance and potential for creating valuable co-products. The team will then compare the strains grown in the photobioreactors to two well-studied algae strains, and the top-performing strains will be further tested in the quest to find the optimal algae strain for biofuel production. 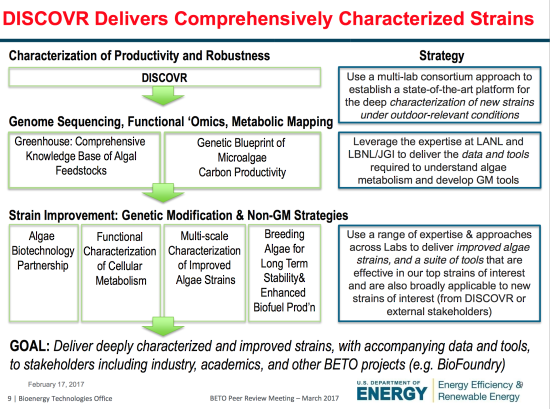 DISCOVR is a part of BETO’s Advanced Algal Systems Program, which seeks to increase the yields and lower the costs of algal biofuels by working with partners to develop new technologies and to conduct crosscutting analyses in order to break down critical technical barriers and promote sustainable and affordable algal biofuels.

They study and experiment and receive grants for algae fuels till the last 30 years, yep, no algae fuels for sale anywhere into the world. Since then i had to pay many 10 of tousands of dollar in fuel cost and also indirect fuel cost included in the price of almost everything.